This article is about the island. For the settlement on the island, see Mykines, Mykines.

Mykines (Danish: Myggenæs) is the westernmost of the 18 main islands of the Faroe Archipelago.

It lies west of 7.5 degrees W, effectively putting it in the UTC-1 region. However, Mykines uses Greenwich Mean Time like the rest of the Faroes. The only settlement on the island is also called Mykines.

On the northern side of the island is the valley Korkadalur, where there are great columns of basalt, called the Stone-wood. To the west of Mykines is the 1 km long islet Mykineshólmur, with several sea stacks clustered at its western end, where a lighthouse was built in 1909. A 40 m long footbridge connects its eastern end with Mykines. 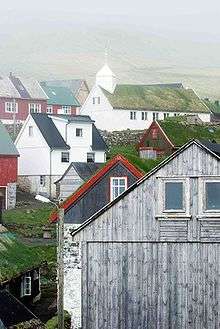 A May morning in Mykines 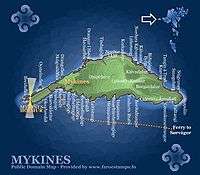 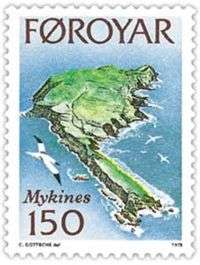 Mykines belongs to the oldest part of the Faroe Islands and was formed about 60 million years ago. The Faroese basalt is divided into three phases of eruption, the lower and oldest, the middle, and the upper and youngest; the lowest formed by the eruption of low-viscosity lava through long fissures, forming flat volcanoes. In the sound between Mykines and Mykineshólmur, Holmgjogv, one can see one of the most copious such flows on the Faroes, with a depth of about 50 m. The interspersed layers of softer volcanic tuff between the layers of basalt are differentially eroded, so forming, especially on the steep northern side of the islet, some of the richest bird cliffs in the world.

Mountain hares (Lepus timidus) have been introduced, and inhabit the mountain area and surrounding valleys. The Mykines house mouse (Mus musculus mykinessiensis) is endemic for Mykines, and this might suggest an early introduction, maybe as early as in the 6th century by the Irish monks, who cultivated this island. Its closest relative was the now extinct St Kilda house mouse (Mus musculus muralis).

Large numbers of puffins and gannets inhabit Mykines and Mykineshólmur. On the rocks at the waters edge there are colonies of cormorants while the eroded tuff layers in the cliffs make perfect nesting ledges for guillemots and razorbills. On the grassy slopes above the bird cliffs, thousands of puffins have their burrows, and their guano fertilizes the slopes.

It has been suggested that the name Mykines is pre-Norse in origin, coming from muc-innis, a Celtic term for pig island. This may be a reference to whales, which are known as muc-mhara (sea sows) in Gaelic.

The population of the island declined over the 20th century, with 11 permanent residents of Mykines village in 2004; the oldest inhabitant was 75 and the youngest six years old. Although there are 40 houses in the village, only six are inhabited year-round. Earlier Mykines was one of the largest villages in the Faroes, with a population of 170 people in 1940. From 1911 to 2004 Mykines was a separate community but in 2005 it merged administratively with Sørvagur kommune. Famous people from Mykines include painter Sámal Joensen-Mikines (1906–1979).

Population of Mykines from 1769