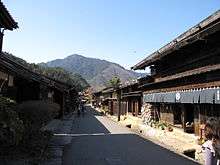 Shukuba (宿場) were post stations during the Edo period in Japan, generally located on one of the Edo Five Routes or one of its sub-routes. They were also called shukueki (宿駅). These post stations (or "post towns") were places where travelers could rest on their journey around the nation.[1] They were created based on policies for the transportation of goods by horseback that were developed during the Nara and Heian periods. 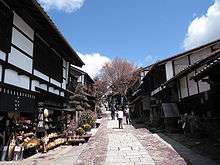 The lodgings in the post stations were established for use by public officials and, when there were not enough lodgings, nearby towns were also put into use. The post station's toiyaba, honjin and sub-honjin were all saved for the public officials. It was hard to receive a profit as the proprietor of these places, but the shogun provided help in the form of various permits, rice collection and simple money lending, making it possible for the establishments to stay open. The hatago, retail stores, tea houses, etc., which were designed for general travelers, were able to build a profit. Ai no shuku were intermediate post stations; though they were unofficial resting spots, they had many of the same facilities.

Generally speaking, as the Meiji period arrived and brought along the spread of rail transport, the number of travelers visiting these post stations greatly declined, as did the prosperity of the post stations. 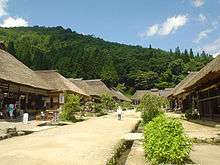 The main street in Ōuchi-juku