Kinski was born in Berlin as Nastassja Aglaia Nakszynski.[3] She is the daughter of the German-Polish actor Klaus Kinski[4] and his wife, actress Ruth Brigitte Tocki.[5] She is of Polish descent. Her family is Germanized ethnic Poles.[6] Kinski has two half-siblings; Pola and Nikolai Kinski. Her parents divorced in 1968. After the age of 10, Kinski rarely saw her father. Her mother struggled financially to support them.[7] They eventually lived in a commune in Munich.

In a 1999 interview, Kinski denied that her father had sexually molested her as a child, but said he had abused her "in other ways."[7] In 2013, when interviewed about the allegations of sexual abuse made by her half-sister Pola Kinski,[8][9] she confirmed that he tried with her, but did not succeed. She said:

Kinski began working as a model as a teenager in Germany. Actress Lisa Kreuzer of the German New Wave helped get her the role of the dumb Mignon in Wim Wenders film The Wrong Move. In 1976, while still a teenager, Kinski had her first two major roles: in Wolfgang Petersen's feature film-length episode Reifezeugnis of the German TV crime series Tatort. Next, she appeared in the British horror film To the Devil a Daughter (1976), produced by Hammer Film Productions. In regards to her early films, Kinski has stated that she felt exploited by the industry. In an interview with W, she said, "If I had had somebody to protect me or if I had felt more secure about myself, I would not have accepted certain things. Nudity things. And inside it was just tearing me apart."[11]

In 1978, Kinski starred in the Italian romance Stay As You Are (Così come sei) with Marcello Mastroianni, gaining her recognition in the United States after New Line Cinema released it there in December 1979. Time wrote that she was "simply ravishing, genuinely sexy and high-spirited without being painfully aggressive about it."[12] The film also received a major international release from Columbia Pictures.

Kinski met the director Roman Polanski at a party in 1976.[13] He urged her to study method acting with Lee Strasberg in the United States and she was offered the title role in Polanski's upcoming film, Tess (1979). In 1978, Kinski underwent extensive preparation for the portrayal of an English peasant girl, which included acquiring a Dorset accent through elocution studies: 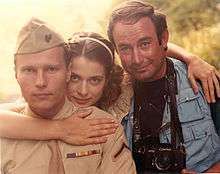 Nastassja Kinski with John Savage and Yoni S.Hamenachem on the set of Maria's Lovers (1984)

The film was nominated for six awards, including Best Picture, at the 53rd Academy Awards, and won three.

In 1981, Richard Avedon photographed Kinski with a Burmese python coiled around her nude body.[5] The image, which first appeared in the October 1981 issue of US Vogue, was released as a poster and became a best-seller, further confirming her status as a sex symbol.[15] 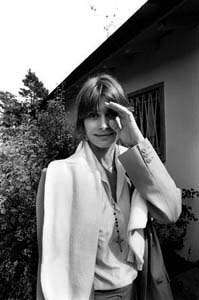 Kinski at the 1990 Cannes Film Festival

During the 1990s, Kinski appeared in a number of American films, including the action movie Terminal Velocity opposite Charlie Sheen, the Mike Figgis 1997 adultery tale One Night Stand, Your Friends & Neighbors (1998), John Landis' Susan's Plan (1998), and The Lost Son (1999).

Her most recent films include David Lynch's Inland Empire (2006) and Rotimi Rainwater's Sugar (2013).

In 1976, when Kinski was 15, she reportedly began a romantic relationship with then 43-year-old director Roman Polanski.[19][20][21][22][23] In a 1999 Guardian interview, the newspaper reports her saying there was categorically no affair and that she said, "There was a flirtation. There could have been a seduction, but there was not. He had respect for me."[7]

In 2001, Kinski stated in an interview for the The Daily Telegraph she was affected by the sleep disorder narcolepsy.[27]