Syed Shamsul Huda KCIE (1862-1922) was a Muslim political leader and scholar in British India. He was born in the village of Gokarna now known as 'Gokarna Nawaab Bari Complex'[1] in Nasirnagar Upazila at Brahmanbaria District earlier integrated into the greater Comilla District, that was a part of Hill Tipperah[2] before Partition.

His father was Syed Riazat Ullah, editor of The Doorbeen, a Persian-language weekly journal.

Syed Shamsul Huda's primary education completed under care of his father in Arabic, Persian, Urdu, Bengali and science of Islam at home. Then he got admitted in Hooghly High Madrasah at Kolkata to complete the traditional education. After that he obtained Bachelor of Arts (BA) degree from Presidency College in 1884 and Bachelor of Law (BL) degree from Kolkata University in 1886. He achieved Master of Arts (MA) from Presidency College on Persian privately in 1889.

Syed Shamsul Huda obtained all kinds of institutional knowledge, and became one of the most eloquent, articulate and educated Muslims of his generation. He carried out a very important roll of Muslim scholar, leader and politician in British India over the beginning of twentieth century.[3]

Syed Shamsul Huda joined in Kolkata Madrasah in 1885 as a lecturer in Arabic and Persian. Same year he became the superintendent in the Department of Arabic and Persian after the death of Mawlana Ubaydullah al-Ubaydi Suhrawardi. Additionally he practiced law at the Kolkata High Court[3] and gradually involved in politics.

The Indian National Congress was established in 1885 by the Kolkata's Hindu leaders. This political body was proposed to symbolize all the people of India, together with Hindu and Muslim population. Prominent Indian Muslim leaders including Sir Syed Ahmad Khan CSI, Nawab Abdul Latif and Syed Ameer Ali, firstly gave their full support to this political body. But later on, the Hindu Congress leaders began practicing partition. Muslim Leaders called Second Annual Meeting of the Kolkata Union about the political attitude and future plan of the Congress in 1895. Syed Shamsul Huda attended and addressed to stop the issue on the title of Indian Politics and the Muhammadans and in this way he became the top of the political dialogue. In his sensitive speech highlighted the political rule of the Indian Muslim and suggested ways how they could make the Congress more united and effective political body.[3]

Syed Shamsul Huda first time opposed as a political leader for the budget in 1905 which spending for the colleges, hospitals and other institutions that have been founded only in districts near Kolkata. He proposed to follow for the same progress for East Bengal too. It was eventually established and proved to remain advantageous to the Muslim of Eastern side Bengal, even though it was sourly opposed by the high society Hindus. As a man of significant education and political consciousness and perceptive, he was pleased to admit the new truth. He wrote:

I claim that after the creation of the new Province, East Bengal has received a great deal more of personal attention. Before the Partition the largest amount of money used to be spent in districts near Calcutta. The best of Colleges, Hospitals and other institutions were founded in or near about the capital of India. Bengal alone now reaps the benefit of those institutions towards which both the Provinces had contributed. We have inherited a heritage of the accumulated neglect of years and cannot be blamed if [we] require large sums to put our house in order.[4]

He also mentioned in another occasion:

They [Hindus] have benefited for very many years out of the revenues of Eastern Bengal and have paid very little for its progress and advancement ... I will only say that if Eastern Bengal now for some years costs money, and if that money is to come from any province outside East Bengal, it should come from Western Bengal and the members from that province should not as any rare grumble at it.[4]

Syed Shamsul Huda was a fellow of Kolkata University in 1902. He was invited for 'Tagore Law Lecture' which was published by Butterworth & Co,(India) Ltd, under the title The Principles of the Law of Crimes in British India.[5] He exposed clarification of the basic law of offenses ideology following works of the British jurists Jeremy Bentham, William Austin, and William Blackstone. He presided over the Provincial Muhammadan Educational Conference at Rajshahi in 1904. He was a member of the 'Legislative Assembly' of the Province of East Bengal and Assam in 1908. He was a 'President' of the All India Muslim League in 1910. He became a member of the Imperial Legislative Council between 1911 and 1915 as a 'Leader' for the Muslim of East Bengal.

He is one of the leaders of public opinion in his Province, and is On the forefront of all movements concerning the Mohammadan community.[6] 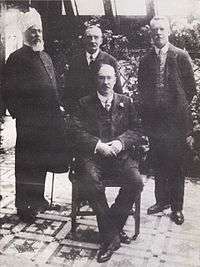 Syed Shamsul Huda was a member of 'Governor’s Executive Council' between 1912 and 1919.[7] He awarded Nawaab in 1913. He awarded KCIE in 1916.[8] He designated Judge of Kolkata High Court in 1917 and became the second Muslim from Bengal occupying the post after Justice Syed Ameer Ali.

In all my endeavours to promote the welfare and to meet the legitimate desires of your community (Musalmans) I have been ably advised by my colleague the Honable Nawab Sir Syed Shamsul Huda and I am glad to take this opportunity to testify to the fact that in my judgement the Mohamedan community in Bengal could have had no more sympathetic or better advocate than he has been.[9]

His term of office as the first President or the Bengal Legislative Council under the reformed constitution was the crowning distinction of a career in which he had already earned honours enough to satisfy the ambition of most men. In accepting that office he rendered the greatest service within his power to Bengal and to the Reforms - a service which will always be held in honourable remembrance. Until failing health compelled his retirement he gave his energies and his exceptional abilities ungrudgingly for the benefit of his countrymen, who will treasure his memory, with gratitude.[10]

The late Nawab Shahib was not a sectarian in any sense of the word. He never made any distinction between Hindus and Muhammadans. He was devoid of all class hatred. He was never unreasonable in his demands for the rights and claims of his co-religionists. In fact he was a gentleman in the highest sense of the word.[11]

Throughout his whole life Sir Shamsul Huda worked for the cause of Islam and he had no other aim in this world. Even if this statement is somewhat exaggerated, there is no doubt that the progress and development of the Muslims of Bengal was very close to his heart. He worked round the clock to improve the existential condition of his fellow Muslims during his long and distinguished career as a jurist, leader and politician.[12]

Syed Shamsul Huda was a patron for the Muslim students of Bengal during the difficult period of colonial and political situation. He created accommodation by founding the Carmichael Hostel for the rural university going Muslim students in Kolkata. For the establishment of the Elliot Madrasah Hostel in 1898, he made two-thirds of the funds by the Government and a sum of Rs. 5,400 was contributed by Nawab Abdul Latif Memorial Committee. He created post of Assistant Director for Muslim education of each division.

Syed Shamsul Huda sanctioned a big sum of Rs. 900,000 by the Bengal Government to purchase land to establish a Government College for the Muslims in Kolkata. During the First World War opening ceremony postponed up to 1926 when Abul Kasem Fazl-ul-Haq became the Education Minister of the united provenance.[13]

He founded a high school in his ancestral property named Gokarna Syed Waliuallah High School in 1915 which bestowed on the name of his same aged uncle.[14] It was Government aided first school in Nasirnagar Upazila for Hindu and Muslim students education. He also established a hostel for the student of Annada Government High School in Brahmanbaria.

Syed Shamsul Huda chose his Kolkata residence in 211, Lawyer Circular Road, Kolkata. He died on 14 October 1922 at the age of 61 and was buried in Tiljola Municipal graveyard. 'The Calcutta weekly Notes' wrote to his death

Starting life as a vakil of the Calcutta High Court, he took for years a leading part in the affairs of his own community, the city and the University and served with distinction in the Legislative Councils of the Province and the Government of India. As a vakil he long enjoyed a Leading practice. For fact, breadth of mind, fair-mindedness and a shrewd yet well balanced judgement which seldom failed to take in the essential of the most complicated situation at a glance, he had hardly an equal and few indeed on this side of India to surpass him. His genial temperament won him many friends in nearly every walk of life. He field several high offices but his services to the public will be chiefly remembered in connection with his appointment as a Member of the Executive Council during Lord Carmichael’s Governorship of Bengal. In this capacity, his countymen found in him a staunch and powerful champion of their just claims and [he] was trusted by Hindus and Mahomedans alike, which itself was a significant tribute to his independence of outlook. catholicity and large heartedness... Sir Shamsul Huda has passed away at the time when his countrymen have stood in the greatest need of their happy combination of qualities which make leadership and which he possessed in a pre-eminent degree.[16]