Aligarh Muslim University (AMU) is a public central university. It was originally established by Sir Syed Ahmad Khan as Mohammedan Anglo-Oriental College in 1875. The Mohammedan Anglo-Oriental College became Aligarh Muslim University in 1920.[2] The main campus of AMU is located in the city of Aligarh. Spread over 467.6 hectares, AMU offers more than 300 courses in both traditional and modern branches of education. In addition to this it has its three off-campus centres at Malappuram (Kerala), Murshidabad (West Bengal) and Kishanganj (Bihar). The university comprises all castes, creeds, religions and genders, and is an Institute of National Importance provided under the Seventh Schedule of the Constitution at its commencement.[3][4]

Bab-e-syed, the gateway to AMU

It was established as Madrasatul Uloom Musalmanan-e-Hind in 1875.[5] The college started on 24 May 1875.[6] The Anglo–Indian statesman Syed Ahmad Khan founded the predecessor of AMU, the Muhammadan Anglo Oriental College, in 1875 having already established two schools.[7] The movement of Muslim awakening associated with Syed Ahmad Khan and M.A.O. College came to be known as Aligarh Movement.[8] He considered competence in English and "Western sciences" necessary skills for maintaining Muslims' political influence, especially in Northern India. Khan's image for the college was based on his visit to Oxford and Cambridge and he wanted to establish an education system similar to the British model.[9]

A committee was formed by the name of foundation of Muslim College and asked people to fund generously. The, then, Viceroy and Governor General of India Sir Lord North Brook gave a donation of Rs 10000 and the Lt. Governor of the North Western Provinces contributed Rs 1000 and by March 1874 the fund for the college stood at Rs 153492 and 8 anas.[6]

In the beginning, the college was affiliated with the University of Calcutta for the matriculate examination but became an affiliate of Allahabad University in 1885. In 1877, the school was raised to college level and Lord Lytton laid the foundation stone of the college building.[6]

Around 1900 efforts began to make the college its own university. The Aligarh Muslim University Act of 1920 made it a central university.[9]

In 1927, a school for the blind was established and, the following year, a medical school was attached to the university. By the end of the 1930s, the university had developed an Engineering faculty. Syed Zafarul Hasan, joined the Aligarh Muslim University in early 1900s as head of Philosophy Department, dean Faculty of Arts. He was a pro-vice chancellor before his retirement. 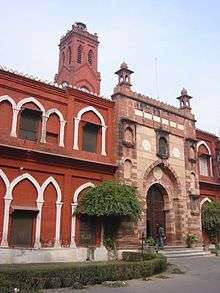 Victoria Gate, a prominent building at the university

Before 1939, faculty members and students supported an all-India nationalist movement. After 1939, political sentiment shifted toward support for a Muslim separatist movement. Students and faculty mobilised behind Muhammad Ali Jinnah and the university became a center of Pakistan Movement.[11][12]

Women's education started at the university with the establishment of the Girls School on 19 October 1906. The All India Muhammadan Educational Conference had started a movement to establish girls education from 1896 onward. The school became intermediate college in 1929 and on 1930 it was made a constituent college of the university and the name was changed to Women's College. Since then it caters to the female undergraduate students of the university.[13]

In late 2014 the university's vice-chancellor Zameer Uddin Shah turned down a demand by female students of the college to be allowed to use the Maulana Azad Library, which was male-only. Shah stated that the issue was not one of discipline, but of space as if girls were allowed in the library there would be "four times more boys," putting a strain on the library's capacity.[14][15][16] Although there was a separate library for the university's Women's College, it was not as well-stocked as the Maulana Azad Library.[14] National human resource and development minister Smriti Irani decried Shah's defense as "an insult to daughters."[15]

Responding to a petition filed by a Human Rights Law Network intern, the Allahabad High Court ruled in November 2014 that the university's ban on female students from using the main library was unconstitutional, and that accommodations must be made to facilitate student use regardless of gender.[16][17] The High Court gave the university until 24 November 2014 to comply.[17]

In 2013, the University was ranked 9th in the top 10 higher education institutions in India by the Times Higher Education World University Rankings.[28]

In 2015, the National Assessment and Accreditation Council rated the school 3.35/A.[30] The US News and World Report, in its education and advice, ranked the university 6th in India, 110th in Asia and 69th in mathematical subjects.[31] The university was ranked 20th by Careers 360 (Magazine).[32]

In 2016, the Faculty of Law retained its 6th rank, third time in a row, in India's best law colleges compiled by India Today.[33] It had consistently ranked in the top 20 in previous years.[34] Jawaharlal Nehru Medical College, the medical school of the university, has been ranked 12th by India Today,[35] it was ranked 14th in the 2015 ranking.[36] Zakir Hussain College of Engineering & Technology, the engineering college of the university, has been ranked 23rd by India Today best college rankings.[37] The MHRD NIRF ranked AMU in the top 10 universities of India. 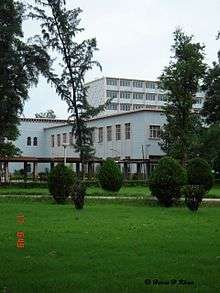 The Maulana Azad Library is the library of the university. It consists of a central library and over 100 departmental and college libraries.

It houses royal decrees of Mughal emperors such as Babur, Akbar and Shahjahan are highlights of the collection.[38]

The foundation of the Library was laid in 1877 at the time of establishment of the Mohammedan Anglo Oriental College by Lord Robert Bulwer-Lytton, 1st Earl of Lytton, the then Viceroy of India and it was named after him as Lytton Library. The present seven-storied building was inaugurated by Jawaharlal Nehru, the first Prime Minister of independent India in 1960 and the Library was named after Abul Kalam Azad popularly known as Maulana Azad, the first Education Minister of the independent India.[38][39]

The social science cyber library was inaugurated by Pranab Mukherjee,the President of India on 27 December 2013.[40] In 2015 the Cybrary was accredited with the International Standard Organisation certification.[41]

In early 2013, Zameer Uddin Shah stoked a controversy by insisting that male students have to wear sherwani if they wanted to meet him.[44]

Sports and cultural activities are executed by various clubs available in the campus. The most important and oldest is the Cricket club[45] and Horse riding club.[46]

Throughout its history a sizable number of university alumni, popularly known as Aligs, have become notable in many varied fields, both academic and otherwise, ranging from Zakir Husain, 3rd President of India;[47] freedom fighter Khan Abdul Ghaffar Khan; the current Vice-President of India Mohammad Hamid Ansari;[48]André Weil the French mathematician of the 20th century;[49] Anwara Taimur the first and the only woman to be the Chief Minister of Assam.[50] Sheikh Abdullah, and Mufti Mohammad Sayeed both former Chief Ministers of Jammu and Kashmir.[51][52] Sports persons like Dhyan Chand, Lala Amarnath and Zafar Iqbal[53] are some among the many alumni of the university.

University in literature and other media

The Aligarh Muslim University is the setting for numerous works of fiction. Films set in the university include Mere Mehboob, a 1963 film directed by Harnam Singh Rawail and starring Rajendra Kumar, Sadhana, Ashok Kumar, Nimmi, Pran, Johnny Walker and Ameeta. The 1966 film Nai Umar Ki Nai Fasal was also filmed on the campus.[54] Aligarh 2015, a film on Ramchandra Siras a gay professor from the university, has been released and received a warm response worldwide.[55]