The University of Dhaka (Bengali: ঢাকা বিশ্ববিদ্যালয় [ɖʰaka biʃʃobid̪d̪alɔe̯], also known as Dhaka University or simply DU), is the oldest university in modern Bangladesh. Established in 1921 during the British Raj, it has made significant contributions to the modern history of Bangladesh.[4][5][6][7] After the Partition of India, it became the focal point of progressive and democratic movements in Pakistan. Its students and teachers played a central role in the rise of Bengali nationalism and the independence of Bangladesh.

Today, it is the largest public university in Bangladesh, with a student body of 33,000 and a faculty of 1,800. It was identified by AsiaWeek as one of the top 100 universities in Asia.[9] However, since the 1990s, the university has suffered from intensely politicized, partisan, and violent campus politics promoted by Bangladesh's political parties.[10] 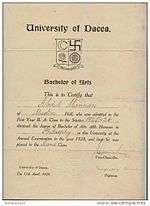 Earliest Bachelor of Arts certificate from the University, 1928

1904 image of Dhaka College, which was in existence from 1841 to 1921 before the founding of Dhaka University

Before Dhaka University was established, near its grounds were the former buildings of Dhaka College. In 1873 the college was relocated to Bahadur Shah Park. Later it shifted to Curzon Hall, which would become the first institute of the university.[11]

The establishment of the university was a compensation of the annulment of the 1905 Partition of Bengal. The partition had established East Bengal and Assam as a separate province, with Dhaka as its capital. However, the partition was abolished in 1911 due to severe opposition from Indian National Congress and Bengali Hindus.[12] To appease the people of East Bengal, Lord Curzon declared that a university as a center of excellence would be established in Dacca. Khwaja Salimullah, the Nawab of Dhaka, also played a pioneering role in establishing a university in Dhaka.[13]

In 1913, public opinion was invited before the university scheme was given its final shape. The secretary of state approved it in December 1913.[11] The first vice-chancellor of the university, Dr. Philip Joseph Hartog, formerly academic registrar of the University of London for 17 years was appointed.[14] 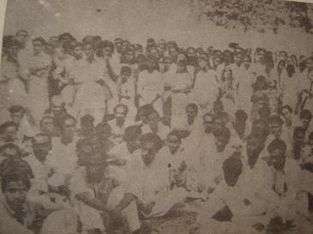 Meeting on the University of Dhaka premises on 21 February 1952

Established in 1921 under the Dacca University Act 1920 of the Indian Legislative Council, it is modelled after British universities. Honorable Chancellor Lord Ronaldshay was the Governor of Bengal between 1917 and 1922. He designated Nawaab Syed Shamsul Huda as a life member. On his recommendation, Lord Ronaldshay designated Sir Ahmad Fazlur Rahman as a provost, earlier he was in Aligarh Muslim University.[15] Academic activities started on 1 July 1921 with 3 Faculties: Arts, Science and Law; 12 Departments: Sanskrit and Bengali, English, Education, History, Arabic and Islamic Studies, Persian and Urdu, Philosophy, Economics and Politics, Physics, Chemistry, Mathematics, and Law; 3 Dormitories for students: Salimullah Muslim Hall, Dacca Hall and Jagannath Hall.[16]

The university played a significant role in the Bengali Language Movement, when Bengalis joined together to fight against Urdu being the official language in East Pakistan. Dhaka University was the main place where the movement started with the students joining together and protesting against the Pakistan government. Later countless students were massacred in where the Shaheed Minar stands today. After the incident, Bengali was restored as official language.[17]

President's Order No. 11 of 1973 re-constitute and re-organize the University of Dhaka to improve the teaching and research provided thereby and the administration after 1971 Independence war. Throughout this order the word Dhaka was substituted for the word Dacca by section 2 of the University Laws (Amendment) Act, 1987 (Act No. XXXVI of 1987).

There are 23 residence halls for the students and dormitories for the teachers as well as for the officials of the university.[18] 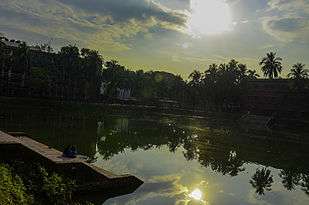 Bank of pond at Shahidullah Hall, University of Dhaka.

The University Library, housed in three separate buildings, is the biggest in Bangladesh. The library holds a collection of more than 617,000 volumes, including bound volumes of periodicals. In addition, it has a collection of over 30,000 manuscripts in other languages and a large number of microfilms, microfiche and CDs. It subscribes to over 300 foreign journals.[20]

Besides the Faculty of Business Studies of the university has an E-Library which is the largest in the Asia of its kind.[22] This advanced level E-Library is connected with 35 internationally renowned libraries and publication houses in the world. Teachers, students and researchers are able to read all journals, books research papers and articles of these leading libraries, including the Dhaka University, Oxford University and Cambridge University libraries, by using the E-Library facilities.[22] 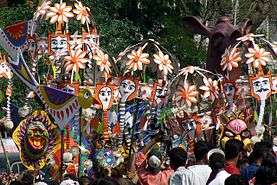 The Medical Center of the University of Dhaka, near the Science Annex Building, offers free medical service and free pathological examinations to students, teachers and staff and also family members of the teachers and staffs. The centre provides service round the clock, seven days a week, with 30 doctors working in shifts. The centre has a dental unit, eye unit, X-ray department and two ambulances.[23]

There are cafeterias on campus, some of which hold historical and architectural interest. In 1971 Pakistani soldiers killed the owner of the Madhur Canteen.[24]

The Teacher-Student Centre, University of Dhaka of the university has its own cafeteria while another cafeteria stands on the Dhaka University Snacks (DUS) chattar. The Faculty of Business Studies has a modern food court for its students.[25]

The university has 70 departments under 13 faculties.

Faculty of Engineering and Technology

Faculty of Earth and Environmental Sciences

See also: List of colleges under University of Dhaka 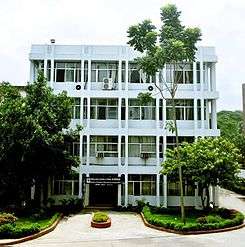 Institute of Statistical Research and Training (ISRT), University of Dhaka 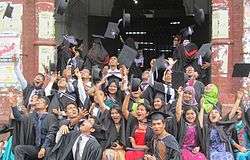 Graduates of University of Dhaka celebrate the day of Convocation 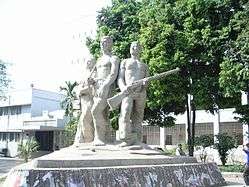 Aparajeyo Bangla, a statue on the Bangladesh Liberation War, at the center of Dhaka University Campus 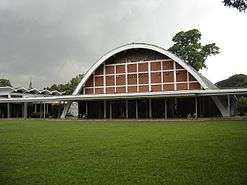 In the best Asian (and Australian) universities ranking, AsiaWeek ranked the University of Dhaka 37th in 1999[31] and 64th (overall and multi-disciplinary category) out of 77 ranked universities in 2000.[32]

In 2000, the university got a comparatively higher rank in student selectivity (23rd) while got lower ranking in academic reputation (74th), faculty resources (59th), research (65th) and financial resources (74) categories.[33]

The university of Dhaka organizes sports and other extracurricular and recreational activities. Office of the director of physical education provides three types of programs:

The Dhaka University Rover Scout Group established in the 1960s. Till now 21 rover scouts from this group have received the "President's Rover Scout Award" from the Honourable President of the People's Republic of Bangladesh. In 2016, the group will be celebrating its golden jubilee with year-long programs and activities.

DUTIMZ which is officially known as The Dhaka University Times, is an online portal of the University of Dhaka which was inaugurated on 26 February 2013.[35]

Since then, Badhan has become a pioneer of voluntary blood donors with 34 wings in universities of the country. The zonal office of Badhan in the university is on the ground floor of Teacher-Student Centre. Other than donating blood, Badhan motivates the youths and the students to donate blood, tests the blood group of the students and the poor population for free, etc.[37]

The Dhaka University Cultural Society, from 2015, also known as DUCS is a university affiliated voluntary organization with the motto is 'Express to Explore'.

DUMUNA is credited for organizing the most prestigious internationally recognized MUN conference of Bangladesh, Dhaka University National Model United Nations (DUNMUN).[41][42] DUMUNA has been successfully organizing this conference since 2012. In addition, DUMUNA organizes workshops on MUN, mock MUN, and sends delegation to MUN conferences including Harvard National Model United Nations. DUMUNA, besides being a campus based voluntary organization, is recognized by United Nations Information Center, Dhaka.[43]

Dhaka University Tourist Society was formed on 30 October 1995 and has been being functional till date. The motto of DUTS is “To develop the tourism sector we need a social movement”.[44]

DUTS focuses on the tourism development of the country and facilitates tours for the students of the university at comparatively lower cost. DUTS works to create awareness among the people of the country regarding tourism and promote tourism in every aspect. DUTS organizes programs like National Tourism Rally, Migratory Bird Fair, Indigenous Fair etc.

DUITS aims to build ICT based campus through technology friendly environment for students. National Campus IT Festival, an event to encourage the innovations and creativity of the students from national arena, is one of the most significant initiatives DUITS has taken so far.[45] DUITS is organizing the festival since 2012.[46]

Dhaka University Film Society also known as DUFS is a voluntary students' organization of the University of Dhaka in Bangladesh.[47][48]

It is one of the pioneers of film society movement in Bangladesh. DUFS's motto is 'Better Films, Better Viewers'. DUFS is an active member of the Bangladesh Federation of Film Societies (BFFS).[49] DUFS is TSC based students' organization. Professor Dr. Mohammad Touhidul Anwar was the first club moderator. Present moderator of Dhaka University Film Society is AAMS Arefin Siddique; present vice chancellor of the university.

Dhaka University Photographic Society (DUPS) was established on 29 August 1999 and is working till date relentlessly to encourage the students of the university to learn to art of photography to open the eyes of the society.[50] DUPS not only facilitates the privileged and professionals, and motivates the passionate ones.

DUPS organizes photography courses for the students of the university. National Photography Festival is one of the flagship projects of DUPS while it is well known for arranging many local and international exhibitions and photography contests.[51] 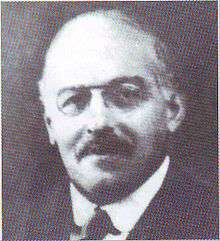 Philip Joseph Hartog, the first Vice Chancellor of the University of Dhaka

Main article: Alumni and Faculty Members of University of Dhaka