Ulrich "Uli" Stielike (born 15 November 1954) is a former German footballer who is the current manager of South Korea national football team. Usually a central midfielder or sweeper, Stielike was well known for his stamina and footballing intelligence.[2] Stielike is one of a small handful of players (Rainer Bonhof and Manfred Kaltz are others) to have played in all 3 European club finals (the European Cup/Champions League, UEFA Cup Winners' Cup and UEFA Cup), the World Cup Final and the European Championship Final.

Stielike was a West Germany youth international for hometown club SpVgg Ketsch when he got signed by UEFA Cup runner-up Borussia Mönchengladbach in 1973, first coming to action as a full back for the then two times German Bundesliga champion. Playing in defending midfield for his club, afterwards, he was part of the Mönchengladbach team that won the Bundesliga titles in 1975, 1976 and 1977, the UEFA Cup in 1975 and gained a runner-up medal in the European Cup in 1977 following a 1–3 against Liverpool F.C. in Rome. In five seasons he amassed 109 Bundesliga matches.[3]

Ahead of the 1977–78 season, Stielike moved on to join Real Madrid to become a reliable fan-favourite in his eight years with Los merengues. His first three seasons at Santiago Bernabéu all ended in Real winning La Liga. In 1980 and 1982, he was part of the side winning Copa del Rey, in 1985 he added the Copa de la Liga, and finished off his Madrid years with the UEFA Cup triumph of the same summer.

In 1985, Stielike joined Neuchâtel Xamax and won two Swiss Super League trophies in 1987 and 1988 with the club.

Stielike retired from his playing career in 1988. He appeared for Mönchengladbach, Real and Xamax in 83 matches in the European cup competitions.[4]

Stielike was capped in 42 internationals with West Germany from 1975 to 1984[5] with whom he won 1980 UEFA European Football Championship and the runner-up medal at the 1982 FIFA World Cup.[6] Stielike did not feature for his country in the 1978 FIFA World Cup after the German Football Association under Hermann Neuberger had temporarily decided to force their coaches not to select players playing their club football outside the Bundesliga. A central figure for the defence of Real Madrid in the late 1970s and the early 1980s, Stielike could just partially live up to those expectations in his duties for West Germany. Early hopes had been that he could be the ideal successor of legendary sweeper Franz Beckenbauer, with whom he played in a few internationals in the 1970s. Stielike played in the now legendary semi-final match of the 1982 world cup, which ended in a 3–3 draw, resulting in penalties. A poignant scene in the penalty shooutout showed the young Pierre Littbarski consoling a tearful Stielike, who missed a penalty, burying his head in Littbarski's shirt, as West Germany's goalkeeper, Harald Schumacher saved Didier Six's penalty to even the score, with the Germans eventually winning 5–4 on penalties. West Germany lost 3–1 to Italy in the 1982 World Cup final.

Stielike's final appearance for his country took place against Argentina (1–3) in September 1984 in Beckenbauer's first match in charge of West Germany. Over those years Stielike scored three, the latest in a 3–2 win over Bulgaria in Varna in February 1984. Shortly after that, he was part of Jupp Derwall's squad for the 1984 UEFA European Football Championship. 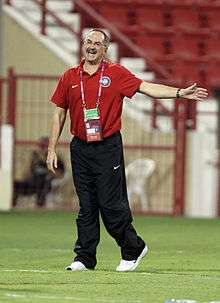 After retirement from his playing career, Stielike was the coach of the Switzerland national football team from 1989 to 1991 as successor of Daniel Jeandupeux and predecessor of Roy Hodgson.

From 1994 to 1996, Stielike also had managerial spells at club level with UD Almería in Spain and SV Waldhof Mannheim in the 2nd Bundesliga, Germany.

In 1998, Stielike had been interviewed by Egidius Braun, the then chairman of the German Football Association, following a vacancy occurred through the resignation of Berti Vogts from the head coaching job of Germany in 1998. He believed Braun would offer him the succession of Vogts, consequently heading into an interview with Kicker (Sports magazine) in this (mistaken) belief. After further talks with Braun had disclosed that Stielke would only be appointed assistant coach rather than head coach, Stielike had to retract some remarks (e.g. concerning Andreas Möller).

From 9 September 1998 to 7 May 2000, Stielike had been the assistant to then Germany coach Erich Ribbeck. Shortly before 2000 UEFA European Football Championship, which ended in a disaster for the Germans, Stielike stepped down from his role as assistant due to differences in some respects with Ribbeck. He was replaced by Horst Hrubesch for the tournament.

On 14 September 2006, Stielike penned a contract with to take over the Ivory Coast national football team in succession of Frenchman Henri Michel, subsequent to the elimination of the team at the 2006 FIFA World Cup. Stielike stepped down as Les Éléphants coach on 7 January 2008 due to his son's alarming ill health.[7] On 1 February, Michael Stielike, 23, died after failing to receive a lung transplant, with his health gradually deteriorating until he was eventually put on life support.[8]

On 5 September 2014, Stielike was named as the newly appointed manager of South Korea national football team. His contract is through the 2018 World Cup. In his first game in charge, South Korea defeated Paraguay 2–0 in a friendly match. His side began its 2015 AFC Asian Cup campaign with a 1–0 win over Oman. This was continued with two wins with the same scoreline over Kuwait and hosts Australia. South Korea qualified to the knockout stage as group winners with nine points and faced Uzbekistan in the quarter-finals. Though the game remained 0–0 for the first 90 minutes, two goals from Son Heung Min in extra time helped South Korea reach the semi-finals. South Korea played in the semi-finals against Iraq and won the match 2–0. South Korea finished the tournament as runners-up after losing to Australia 2–1 in the final. Despite the loss, the team's public image, which was damaged after 2014 World Cup, totally restored and they were welcomed like heroes, as the team had one of the strongest defensive line ever in the tournament, conceding no goal before the final.