Tall rod puppets, a signature of the parade. 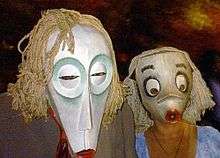 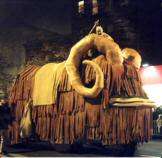 New York's Village Halloween Parade is an annual holiday parade and street pageant presented on the night of every Halloween in New York City's Greenwich Village. The Village Halloween Parade, initiated in 1974 by Greenwich Village puppeteer and mask maker Ralph Lee, is the world's largest Halloween parade[1] and one the major nighttime parade in the United States. Another famous nighttime parade is the Walt Disney's Main Street Electrical Parade which ended Oct. 2016

It has been called "New York's Carnival." Although the parade is currently not as informal and wild as it was in its earliest years, it is in effect still an alternative festival.

Artists went into the schools to create giant puppets with children for the parade. Musical groups were enlisted: pick-up bands, samba bands, Dixieland, Italian, Chinese, Irish, African, steel bands. These groups provided the heartbeat of the parade. Increasingly, more individuals participated dressed in their own fantasies. Bystanders could watch from the sidelines or join the procession.

Starting in 1977, the parade route traversed 10th Street from Greenwich Avenue to Fifth Avenue, entering Washington Square through the Arch. Jefferson Market Library was transformed into a haunted fortress, with a twelve-foot spider crawling up and down the clock tower. On 10th Street, the balconies of Renwick Row became the setting for a gathering of grotesque sophisticates. Washington Square Arch provided another lofty stage. A fat devil appeared up on top, waved to the crowds and released a cascade of balloons; then a dummy of the devil slid down a wire to the middle of the fountain area below. Joel Oppenheimer captured the spirit of the parade that year in the Village Voice:

"This was a huge and good and happy gathering of all of us, grown-ups and children, men and women, straights and gays, blacks and whites, all the dualities out there, holding off the darkness and the ghosts, and saying Goodbye, Sun, see you next year." [2]

With the size of the parade having reached over 250,000, in 1985 the route was moved out of the narrow streets of the West Village and onto 6th Avenue.[3] After the 1985 parade, Ralph Lee stepped down from his position as director, stating, "The parade has always been a celebration of the individual imagination in all its infinite variety. It continues to provide a framework for this expression and invites the participation of everyone."[4] Subsequently Jeanne Fleming, who had been working on the parade for three years, took over as director. Fleming continues to manage the parade today. 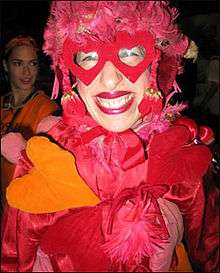 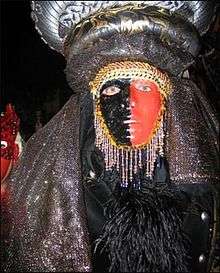 A masquerader poses in front of a wrought iron fence in historic Greenwich Village.

Straightforward, everyday Halloween costume fare — monsters, witches, aliens, pirates, cartoon and storybook characters, animals, royalty and celebrities — are easily upstaged by the unpredictable variety of creations that sometimes defy description. The key to the competition seems to be to come up with a one-of-a-kind, entertaining idea, execute it cleverly, and address the costume's technical and artistic challenges. Simple but clever also works, as well as the absurd juxtaposing of unrelated ideas. There is also strength in numbers in this parade; one may be overlooked dressing like Richard Simmons, but twenty Simmons look-alikes, in wigs and hot pink shorts, cannot fail to attract attention.

The audience is likely to see old women in a Kazoo band, a puppet ship with a full set of sails, a Statue of Liberty stabbed in the chest, a group of bulldogs on leashes all dressed as Batman, skeletons playing the tuba, skeletons dressed as Krispy Kreme employees, brides and grooms, brides and brides, grooms and grooms, politicians, and madrigal drum corps. Onlookers have been entertained by walking Scrabble tiles that rearrange themselves to spell various words; decks of playing cards shuffling up the avenue; and armies of chess pieces marching in regiments of black and white, with small children as pawns.

"Walls are down tonight for the marchers, revealing an indescribably beautiful, powerful, scary realm of diversity," reflects cultural anthropologist Greg Steinbrenner. He recalls once watching a "...group of giddy yuppies dressed as the Hundred and One Dalmatians [sic] join forces with 101 other Dalmatians fleeing a Cruella De Vil [sic] of questionable gender."

Although the parade is billed as family friendly, costumes depicting sexual organs, paraphernalia, and related themes are common. Walking penises, condoms, faux- bare-chested and bare-bottomed women, and flashers exposing prop privates do not faze the New York audience, and it is rare that anything is banned. (An independent, alternative parade exclusively for small children and their parents takes place in nearby Washington Square Park.) On one occasion, the NYPD prevented The Village Voice's float from entering the parade, on the grounds that its tires were flat, and its float was overloaded with people, some of them throwing things at other marchers. The float featured performer and DJ Lola Rock 'N' Rolla dressed as a vagina.[5] Jen Gapay, promotions director for the Voice, suggested a different reason for the crackdown: "I think it had something to do with the pussy." Lola Rock 'N' Rolla agreed: "If I was a big dick, this never would have happened." Lola finished the parade on foot.[6] 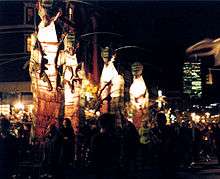 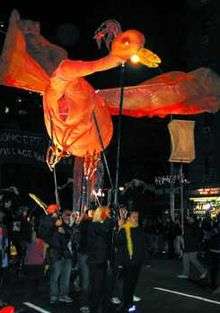 An incandescent baby phoenix conceived and designed by Sophia Michahelles of Superior Concept Monsters rises from fiery ashes to new life in 2001, after the September 11 attacks.

Finishing touches are made to a giant dinosaur puppet in the staging area on parade day.

In 2001, the parade presented a work of puppetry that would become celebrated for its artistry, and remembered in the city's history. After terrorists struck Lower Manhattan on September 11, 2001, events citywide and nationwide were being cancelled. Organizers believed the parade would give the city a much-needed emotional release, reform the community, and help it to begin the healing process. They felt that this was the most positive way they, as artists, could serve the city at such a desperate time. "This is the meaning of the Dancing Skeletons that always lead the march: they know better than anyone what they have lost, and so they dance this one night of the year to celebrate life," Fleming told CNN in an interview.

By September 15, Fleming had scrapped the old theme and chosen a new one. Although no one was certain the parade would take place, designer Sophia Michahelles conceived of a new theme, Phoenix Rising, to galvanize the spirit of New York in the wake of the tragedy. A giant puppet of a phoenix, the mythical bird that rises up out of its own ashes, was created by Michahelles in the workshop of Official Parade Puppeteers Superior Concept Monsters. The animated creation was mechanically configured to spread its wings and rise out of fiery ashes, represented by flickering lanterns lifted on poles, encircling the parading figure. On October 25 the parade received final authorization to go ahead. In light of the widely established community relationships which Fleming had cultivated, and the parade's long tradition, Mayor Rudy Giuliani insisted it go on.

The parade was cancelled in 2012, the first time it had been cancelled, due to Hurricane Sandy leaving Lower Manhattan without power.

At Spring Street and Sixth Avenue, heading south on Sixth to Broome Street, costumed marchers gather well before the official line-up scheduled for 6:00 p.m. In fact, beginning at Noon on parade day, areas on adjoining streets are designated for groups with puppets, floats, and other complicated presentations requiring more set-up and rehearsal. Parade marshals and volunteers keep order and answer questions, assisted by the police. At 7:00 p.m., the first enormous puppets and theme performance enter the parade route to lead the march straight up Sixth Avenue (officially known as The Avenue of the Americas). After the puppets safely pass, the waiting throngs of costumed participants join behind the puppets, and throughout the evening more puppets, floats, bands and other performers are introduced into the stream. It can take two to three hours to enter the parade, so the staging area becomes its own party. Masqueraders continue to show up for hours, stake out a position in the line-up, and gather around their favorite live bands.

Hours before the event, onlookers begin to fill the sidewalks, up to ten deep, behind police barricades. Those wishing for a better view sometimes climb trees and stand on anything else available, including fences, garbage receptacles and telephone booths, but only until police take notice. Streets intersecting the route are closed at 6 p.m., and at these points the crowds swell. Those wishing to enter the parade there are not allowed, but are directed by police to Spring Street. Unlike Macy's Thanksgiving Day Parade, no viewing stands are provided.

The parade is unlit, and relies on whatever street light is normally available. During this time of year in New York, the sun sets shortly before the parade. These night conditions are ideal for the puppets, which theme designers Kahn and Michahelles illuminate from within using LEDs, electroluminescent wire, and LCD projection . One portion of the parade is lit, however, to provide enough visibility for television cameras and professional photographers. This area requires a press pass from organizers. Print and broadcast media from many countries cover New York's Village Halloween Parade, and it is broadcast locally on NY1 television. In 2000, it was broadcast nationally by USA and the SciFi Channel with limited success.

The distinction between participant and spectator is blurry. Many in the audience are themselves in costume — some show up to watch and end up joining — and attention-seeking revelers zigzag across the avenue to interact with the audience, receive applause and cheers, pose for snapshots, throw candy to the children, and mug for the hungry international media. Organizers specifically encourage the marchers to play to the crowd, and the giant puppets' reach often extends over the barricades deep into the crowd.

The parade crosses the intersections of Houston Street, Bleecker Street, Christopher Street, and Greenwich Avenue, then ends at 16th Street, though it once ran to 21st Street. This is not the end of the evening, however; after participants are directed off the route to the east on 16th Street, they disperse to the many costume parties planned at area bars, nightclubs, and restaurants.