Nicholas "Nicky" Butt (born 21 January 1975) is an English football coach and former player who is the head of coaching at the Manchester United youth academy. He is also a co-owner of Salford City.

He played professional football as a midfielder from 1992 to 2011. He began his career with Manchester United and spent 12 years in their first-team, winning six Premier League titles, three FA Cups, four FA Community Shields, the UEFA Champions League and the Intercontinental Cup, before moving to Newcastle United in 2004. He spent one season on loan to Birmingham City in 2005–06. He is also a former England international; he won 39 caps in a seven-year England career. He finished his career abroad, playing for South China. 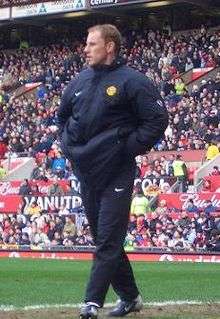 Butt on the sidelines at Old Trafford in March 2004

Born in Gorton, Manchester, Butt began his career at Manchester United as an important part of their youth team before turning professional in 1993.

He made his first-team debut in the 1992–93 season as a substitute against Oldham Athletic in a 3–0 Premier League win on 21 November 1992, but did not get his big break in the team until the 1994–95 season, often covering for Roy Keane in the event of injuries and suspension. One of his first appearances for the first team came in the FA Cup semi-final on 10 April 1994, also against Oldham as a substitute, this time in a 1–1 draw at Wembley Stadium. United won the replay 4–1 at Maine Road but he was not included in the squad. 1994–95 saw Butt play 35 games in all competitions, scoring one goal and featuring in the starting eleven for the FA Cup final, which United lost to Everton.

With the departure of Paul Ince to Internazionale in the 1995 close season, manager Alex Ferguson chose to draft in Butt as Ince's successor in midfield alongside Roy Keane. Butt was part of a notable batch of Manchester United young talent dubbed Fergie's Fledglings, who had all been unleashed into the first team in 1995 having won the FA Youth Cup in 1992.

Butt performed remarkably in his first two full seasons at United, and often started in the lineup, scoring crucial goals, such as against Liverpool in Eric Cantona's famous comeback match in October 1995, and forcing Nigel Winterburn to concede an own goal for the winner against Arsenal in 1996. Butt also functioned as a steady replacement for Roy Keane as the hard tackler of the midfield, especially when Keane was injured for much of the 1997–98 season, earning a PFA Team of the Year award that year. However, when Keane returned, and after striker Paul Scholes developed into a midfielder around the end of the 1990s, Butt's first-team chances started to become increasingly limited.

Butt still went on to collect many honours at United, as the club capped their domination of the 1990s with a remarkable and unique treble win in 1999 (with Butt playing the whole of the Champions League Final due to Roy Keane being suspended), and several more titles in the years up till 2001. By the time of his departure from Old Trafford, Butt had gained six Premier League title winner's medals, three FA Cup winner's medals and a Champions League winner's medal. He had also collected an FA Cup runners-up medal in 1995.

Butt handed in a transfer request in January 2004,[2] but turned down a proposed move to Birmingham City during the January transfer window.[3] He was signed by Bobby Robson for Newcastle United in July 2004 for a fee of £2.5 million on a four-year deal, where he was seen as a replacement for the veteran Gary Speed, who had moved to Bolton Wanderers.[4]

Butt had a disappointing and injury-marred 2004–05 season, prompting the then Newcastle manager Graeme Souness to sign Senegalese midfielder Amdy Faye in January 2005. Despite a promising start, the fans turned on Butt after the 4–1 defeat against Manchester United in the FA Cup semi-final. The acquisition of Scott Parker and Emre in the summer of 2005 pushed Butt further down the pecking order, and his move to Birmingham City (managed by former Manchester United team-mate Steve Bruce) on a season-long loan was announced on 3 August 2005.[5]

However, on 13 February 2006, Butt walked out on his manager and former Manchester United team mate Steve Bruce, after finding out Bruce placed his son Alex Bruce in the squad ahead of himself, and was later fined two weeks wages. After Birmingham were relegated from the Premier League, Butt returned to Newcastle who were being managed by Glenn Roeder.

Although not an instant fan favourite at St. James' Park, Butt won over some fans with two goals scored through headers in a pre-season friendly against Villarreal.[6] There was some speculation that newly appointed Sunderland manager Roy Keane would try to sign his former Manchester United midfield partner. However, due to the lack of back-up midfielders at Newcastle and his good pre-season form, Butt remained at Newcastle. 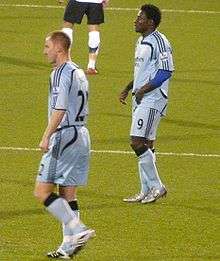 During the 2006–07 season, Butt was much more involved in the first team at Newcastle, playing in the holding role which allowed the likes of Parker and Emre to go forward. On 14 January 2007, Butt scored his first Newcastle goal in over 2 years when he scored the winner against Tottenham Hotspur in a 3–2 victory at White Hart Lane.[7] Butt's return to form was encapsulated when he captained Newcastle in a UEFA Cup match against Zulte Waregem on 15 February when Parker was injured.[8] His good form that season continued, as on 9 April, Butt won the man of the match award for his performance against Arsenal. He continued to captain Newcastle whenever Parker was injured, and by the end of the season it was widely considered that he had won over the Newcastle fans.[9]

With Parker having moved to West Ham United, Butt continued to play a big part in Newcastle's 2007–08 campaign. On 21 December, he penned a new contract keeping him at the club until the end of next season.[10] After being an almost ever-present in that season, he expressed a desire to finish his career with Newcastle.[11] Butt also started the season as captain, filling in for the injured Michael Owen, and proved to be a popular choice. Butt played his 100th league game for Newcastle on 21 December 2008, marking it with a 2–1 home win against Tottenham. Newcastle were eventually relegated that season, meaning that Butt's record of playing in every Premier League season has been relinquished.

Butt was made permanent club captain for the 2009–10 season, his first outside the top flight, following Michael Owen's departure to Manchester United as a free agent during the summer transfer window. However, vice-captain Alan Smith's impressive form has seen him take the armband more often than Butt. Butt started fewer games, but still effectively carried out his holding role well, leading his side to gritty shutouts in most of the games he started.

The club eventually won both promotion to the Premier League and the Championship title, and Butt announced his retirement in the build-up to Newcastle's last home game against Ipswich Town.[12] He entered his penultimate game as a substitute and won a penalty en route to a 2–2 draw. Butt lifted the Championship trophy alongside vice-captain Alan Smith.

After leaving Newcastle he was backed by former Newcastle boss Chris Hughton to move into coaching, although a coaching position with Newcastle is not something Hughton had spoken with Butt about.[13] 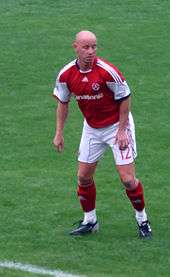 On 6 November 2010, the chairman of Hong Kong club South China, Steven Lo, said that the club expected Butt to sign for them at the end of the month.[14] Butt signed for South China on 22 November. His first match was against TSW Pegasus in a 2–1 win for South China. Butt scored from a freekick during this game but also missed a penalty.[15] He went back to the UK right after the game. He came back to Hong Kong in mid January 2011. His second match with South China was against Tai Po FC in a 0-1 defeat on 29 January 2011. Mateja Kežman also debuted for South China in the same match. Butt received his first red card against rivals Kitchee in a league match which later prove to be crucial in deciding the league title. Butt left South China and returned to England in May 2011.

After leaving South China, he featured in Gary Neville's testimonial against Juventus on 24 May 2011 in central midfield alongside Paul Scholes, rekindling the old times in a midfield that also contained David Beckham. However, they lost the game to the Old Lady. Butt also featured in midfield for Eric Cantona's New York Cosmos in Paul Scholes' testimonial match against Manchester United at Old Trafford on 5 August 2011.[16]

In October 2012 he returned to Manchester United as a coach for the club reserve team.[17][18]

In 2014, it was announced that Butt, along with fellow Manchester United legends Gary Neville, Ryan Giggs, Paul Scholes, and Phil Neville had agreed a deal to purchase Salford City ahead of the 2014–15 season.[19][20] with plans to get the club to the Football League.[21] The group announced they would take part in a special friendly, with Salford facing a Class of '92 team.[22][23][24] On 22 September, the group agreed to sell a 50% stake in the club to billionaire Peter Lim.[25][26]

On April 22, 2014, with the departure of David Moyes from the position of manager of Manchester United, it was announced that Ryan Giggs was going to be interim manager, and that Butt was to be his assistant manager, alongside Paul Scholes.

Having been capped five times at under-21 level, he won his first England cap during the 1996–97 season against Mexico and became a squad regular, providing reliable backup for the central midfield positions. An injury to first choice midfielder Steven Gerrard before the 2002 FIFA World Cup gave Butt his chance in the starting line-up alongside Manchester United team-mates David Beckham and Paul Scholes. Ahead of England's quarter-final game against Brazil, he was named "the best player of the England squad" by Brazilian legend Pelé,[28] a compliment to his performance in the unattractive holding role. England eventually crashed out of the World Cup after a 2–1 defeat to Brazil.

After the World Cup he returned to his role as a squad player, providing experienced cover for the first-choice midfield pairing of Steven Gerrard and Frank Lampard. He was selected for UEFA Euro 2004, but missed the tournament through injury. His last international appearance was in a friendly against Spain on 17 November 2004. In total he has appeared 39 times for England.

In June 2003, Butt was arrested over allegations of the assault of a woman at Brasingamen's nightclub in Alderley Edge on 4 May 2003.[33]