Ning’an (Chinese: 宁安; Pinyin: Níng'ān) is a city located approximately 20 km southwest of Mudanjiang, in Heilongjiang province of China. It is located on the Mudanjiang River (formerly known as Hurka River), which flows north, eventually falling into the Sungari River near Sanxing.

Administratively, Ning'an is now a county-level city, and a constituent part of the prefecture-level city of Mudanjiang.

Notable geographic features of the county-level city of Ning'an include Lake Jingpo and a crater underground forest (火山口地下森林). Lake Jingpo is a natural reservoir on the Mudanjiang River upstream (about 40 km southwest, straight-line distance) from Ning'an central urban area, result of the volcanic eruptions about 10,000 years ago. 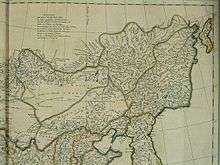 Northeastern part of the map of China and Chinese Tartary (1735; based on the expedition of 1709), with Ninguta shown within Jilin Province

During the early Qing dynasty, the town of Ning'an, known then under the Manchu name Ningguta (transcribed into Chinese as 宁古塔, Ningguta), was one of the most important towns in the entire Manchuria beyond the "Willow Palisade". The name "Ningguta" literally means "six" in Manchu language because it was once guarded by six grandsons of Möngke Temür (猛哥帖木儿).

The Hurka River valley, where Ninguta was located, was the traditional homeland of the Jianzhou Jurchens (who later started calling themselves Manchus), Ninguta and Sanxing being the two oldest centers of the incipient Manchu state.[3] After the Manchus conquered all of China in 1644, the Ninguta area continued to be considered by the Qing dynasty ruling family as the place of its origin.[4]

Already in 1652 the Qing government sent 2000 horsemen, armed with bows, matchlock firearms, and iron cannons, commanded by Sarhuda to set a garrison at Ninguta, which was the first Qing garrison beyond the Willow Palisade.[5] In June 1653 Sarhuda's position became styled "military deputy-lieutenant governor" (昂邦章京, or amban-jianggin in Manchu)[6][7] and a deputy lieutenant general (副都统, fu dutong) were appointed to command the Ninguta garrison.[8]

The suitability of Ninguta as an administrative center was in part due to its location on the Hurka River (or, for the original site, on the Hurka's tributary Hailang), which provided a convenient transportation route connecting Ninguta with the lower Sungari and the lower Amur River. Early on, a great dockyard operated in Ninguta, building boats for the Mudanjiang/Sungari/Amur river system, although it was later relocated to Jilin City.[9]

In 1658 Sarhuda, in charge of a Manchu fleet of several dozen ships, and including also General Shin Ryu's Korean force, sailed from Ninguta down the Hurka and the Sungari, to defeat the smaller fleet of the Russian Cossack Onufriy Stepanov near the fall of the Sungari into the Amur.[10]

After the death of Sarhuda in 1659, his son Bahai (巴海) was appointed to occupy Sarhuda's position.[7]

In 1662, the title of the military deputy-lieutenant governor (amban-jianggin) position was changed to the Ninguta Military Governor (镇守宁古塔等处将军, Zhenshou Ninguta Dengchu Jiangjun), Bahai being the first occupant of this post,[7] while the office of the deputy lieutenant general was relocated to Jilin City.[8] 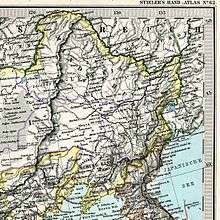 In 1891, just a few years before the beginning of the construction of the Chinese Eastern Railway and the rise of Mudanjiang, Ninguta still remained one of the most important cities of Manchuria. In Jilin Province as it existed at the time, it was second only to Jilin City

Growth of the more conveniently located Jilin City resulted in the decrease of the relative importance of Ninguta. Still, Ninguta was the main seat of government of the eastern half of the beyond-the-palisade Manchuria until 1676,[5] when the Military Governor (jiangjun) moved from Ninguta to Jilin City (then called Jilin Ula Cheng, i.e. Jilin River City), and the Deputy Lieutenant-General (副都统, fu dutong) was transferred in the opposite direction (from Jilin City to Ninguta).[7][8]

Although now lower-ranked than Jilin City, Ninguta retained its importance into the 18th and 19th century as one of the few cities existing beyond the Willow Palisade. The Deputy Lieutenant-General stationed there was the top government official for the entire region stretching east to the Sea of Japan and populated primarily by a variety of Tungusic peoples, such as the Nanais.[4][11]

According to the evidence of the Jesuits who visited the area in 1709 along with a government-sponsored ginseng-harvesting expedition,[12] by the early 18th century Ninguta had become an important center of trade in the local forest products, namely ginseng harvested in the region, and the sable pelts, collected as tax from the Nanai natives. Therefore, besides the Manchu garrison and the officials, Ninguta was home to numerous Chinese civilians, some of whom had come to Ninguta from faraway provinces in order to participate in the profitable commerce.[4] There were already numerous peasant villages around the town, some at quite a distance from it, populated both by Manchus and by Han Chinese exiled to this area for various offenses against the law. (Convicts started being sent to Ninguta area as early as 1660; anti-Qing rebels, captured in southern China, followed in 1661[13]) A variety of cereal crops, such as millet and oats were grown there.[4]