Most county-level cities were created in the 1980s and 1990s by replacing counties.

A county-level city is a "city" (Chinese: 市; pinyin: shì) and "county" (Chinese: 县; pinyin: xiàn) that have been merged into one unified jurisdiction. As such it is simultaneously a city, which is a municipal entry, and a county which is an administrative division of a prefecture.

County-level cities are not "cities" in the strictest sense of the word, since they usually contain rural areas many times the size of their urban, built-up area. This is because the counties that county-level cities have replaced are themselves large administrative units containing towns, villages, and farmland. To distinguish a "county-level city" from its actual urban area (the traditional meaning of the word "city"), the term 市区 shìqū, or "urban area", is used.

Comparable territorial divisions in other countries 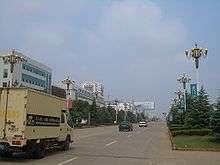 In the main urban area of Daye, a county-level city within the prefecture-level city of Huangshi, Hubei. Daye also includes some separate towns, such as Dajipu (大箕铺)

In France, an equivalent of a county-level city is an agglomeration community.

While the idea of a "city" being a unit consisting of several "towns" is not a common one in English-speaking world, a somewhat similar naming convention is used for local government areas in some parts of Australia. For example, in New South Wales such a unit may often be called a "city" (rather than a traditional "shire"), and consist of "towns". E.g. City of Blue Mountains is made of a number of towns (Katoomba, Springwood, etc.).

Another example would be "municipal government" in the Canadian province of Ontario. Small municipalities (cities) and towns, along with urban, sub-urban and rural areas were merged or integrated into a "super" area, in part to obtain economies in administrative overhead by not having for each city and town individual library commissions, fire fighting units, health care, and other social services common to all areas. So for example, there has been for less than 10 years the "Municipality of Chatham-Kent" wherein the Corporation of the City of Chatham serves as the "seat" for the newly Chatham-Kent merged municipality. This agglomeration includes all of the "townships" in the county of Kent, with cities and towns like Wallaceberg, Thamesville, Dresden, Wheatley. This "amalgamation" as it is referred to, was controversial when it was essentially "forced" upon the constituents through provincial legislation.

Today, instead of each city having its own mayor and city councillors, there is a council with representatives from the various areas surrounding Chatham city. 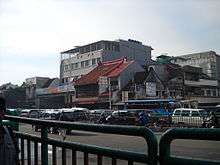