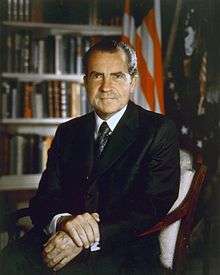 The Nixon shock [1] was a series of economic measures undertaken by United States President Richard Nixon in 1971, the most significant of which was the unilateral cancellation of the direct international convertibility of the United States dollar to gold.

In 1944 in Bretton Woods, New Hampshire, representatives from 44 nations met to develop a new international monetary system that came to be known as the Bretton Woods system. Conference members had hoped that this new system would “ensure exchange rate stability, prevent competitive devaluations, and promote economic growth."[2] It was not until 1958 that the Bretton Woods System became fully operational. Countries now settled their international accounts in dollars that could be converted to gold at a fixed exchange rate of $35 per ounce, which was redeemable by the U.S. government. Thus, the United States was committed to backing every dollar overseas with gold. Other currencies were fixed to the dollar, and the dollar was pegged to gold.

For the first years after World War II the Bretton Woods system worked well. With the Marshall Plan, Japan and Europe were rebuilding from the war, and countries outside the US wanted dollars to spend on American goods — cars, steel, machinery, etc. Because the U.S. owned over half the world's official gold reserves — 574 million ounces at the end of World War II — the system appeared secure.[3]

However, from 1950 to 1969, as Germany and Japan recovered, the US share of the world's economic output dropped significantly, from 35% to 27%. Furthermore, a negative balance of payments, growing public debt incurred by the Vietnam War, and monetary inflation by the Federal Reserve caused the dollar to become increasingly overvalued in the 1960s.[3]

In France, the Bretton Woods System was called "America's exorbitant privilege"[4] as it resulted in an "asymmetric financial system" where non-US citizens "see themselves supporting American living standards and subsidizing American multinationals". As American economist Barry Eichengreen summarized: "It costs only a few cents for the Bureau of Engraving and Printing to produce a $100 bill, but other countries had to pony up $100 of actual goods in order to obtain one".[4] In February 1965 President Charles de Gaulle announced his intention to exchange its U.S. dollar reserves for gold at the official exchange rate.[5]

By 1966, non-US central banks held $14 billion, while the United States had only $13.2 billion in gold reserve. Of those reserves, only $3.2 billion was able to cover foreign holdings as the rest was covering domestic holdings.[6]

By 1971, the money supply had increased by 10%.[7] In May 1971, West Germany left the Bretton Woods system, unwilling to revalue the Deutsche Mark.[8] In the following three months, this move strengthened its economy. Simultaneously, the dollar dropped 7.5% against the Deutsche Mark.[8] Other nations began to demand redemption of their dollars for gold. Switzerland redeemed $50 million in July.[8] France acquired $191 million in gold.[8] On August 5, 1971, the United States Congress released a report recommending devaluation of the dollar, in an effort to protect the dollar against "foreign price-gougers".[8] On August 9, 1971, as the dollar dropped in value against European currencies, Switzerland left the Bretton Woods system.[8] The pressure began to intensify on the United States to leave Bretton Woods.

On the afternoon of Friday, August 13, 1971, these officials along with twelve other high-ranking White House and Treasury advisors met secretly with Nixon at Camp David. There was great debate about what Nixon should do, but ultimately Nixon, relying heavily on the advice of the self-confident Connally, decided to break up Bretton Woods by suspending the convertibility of the dollar into gold; freezing wages and prices for 90 days to combat potential inflationary effects; and impose an import surcharge of 10 percent,[11] to prevent a run on the dollar, stabilize the US economy, and decrease US unemployment and inflation rates, on August 15, 1971:[12][13]

Speaking on television on August 15, the Sunday before the markets opened, Nixon said the following:

The third indispensable element in building the new prosperity is closely related to creating new jobs and halting inflation. We must protect the position of the American dollar as a pillar of monetary stability around the world.

In the past 7 years, there has been an average of one international monetary crisis every year...

I have directed Secretary Connally to suspend temporarily the convertibility of the dollar into gold or other reserve assets, except in amounts and conditions determined to be in the interest of monetary stability and in the best interests of the United States.

Now, what is this action — which is very technical — what does it mean for you?

Let me lay to rest the bugaboo of what is called devaluation.

If you want to buy a foreign car or take a trip abroad, market conditions may cause your dollar to buy slightly less. But if you are among the overwhelming majority of Americans who buy American-made products in America, your dollar will be worth just as much tomorrow as it is today.

The effect of this action, in other words, will be to stabilize the dollar.[14]

The American public felt the government was rescuing them from price gougers and from a foreign-caused exchange crisis.[15][16] Politically, Nixon's actions were a great success. The Dow rose 33 points the next day, its biggest daily gain ever at that point, and the New York Times editorial read, "We unhesitatingly applaud the boldness with which the President has moved."[3]

By December 1971, the import surcharge was dropped as part of a general revaluation of the Group of Ten (G-10) currencies, which under the Smithsonian Agreement were thereafter allowed 2.25% devaluations from the agreed exchange rate. In March 1973, the fixed exchange rate system became a floating exchange rate system.[17] The currency exchange rates no longer were governments' principal means of administering monetary policy.

The Nixon Shock has been widely considered to be a political success, but an economic mixed bag in bringing on the stagflation of the 1970s and leading to the instability of floating currencies. The dollar plunged by a third during the '70s. According to the World Trade Review's report "The Nixon Shock After Forty Years: The Import Surcharge Revisited", Douglas Irwin reports that for several months, U.S officials could not get other countries to agree to a formal revaluation of their currencies. The German mark appreciated significantly after it was allowed to float in May 1971. Further, the Nixon Shock unleashed enormous speculation against the dollar. It forced Japan’s central bank to intervene significantly in the foreign exchange market to prevent the yen from increasing in value. Within two days August 16–17, 1971, Japan’s central bank had to buy $1.3 billion to support the dollar and keep the yen at the old rate of 360 Yen to the dollar. Japan’s foreign exchange reserves rapidly increased: $2.7 billion (30%) a week later and $4 billion the following week. Still, this large-scale intervention by Japan’s central bank could not prevent the depreciation of US dollar against the yen. France also was willing to allow the dollar to depreciate against the franc, but not allow the franc to appreciate against gold (Page 14 Douglas). Even much later, in 2011, Paul Volcker expressed regret over the abandonment of Bretton Woods: "Nobody's in charge," Volcker said. "The Europeans couldn't live with the uncertainty and made their own currency and now that's in trouble."[3]

The current world monetary system assigns no special role to gold; indeed, the Federal Reserve is not obliged to tie the dollar to anything. It can print as much or as little money as it deems appropriate. There are powerful advantages to such an unconstrained system. Above all, the Fed is free to respond to actual or threatened recessions by pumping in money. To take only one example, that flexibility is the reason the stock market crash of 1987—which started out every bit as frightening as that of 1929—did not cause a slump in the real economy.

While a freely floating national money has advantages, however, it also has risks. For one thing, it can create uncertainties for international traders and investors. Over the past five years, the dollar has been worth as much as 120 yen and as little as 80. The costs of this volatility are hard to measure (partly because sophisticated financial markets allow businesses to hedge much of that risk), but they must be significant. Furthermore, a system that leaves monetary managers free to do good also leaves them free to be irresponsible—and, in some countries, they have been quick to take the opportunity.[18]

Debate over the Nixon Shock has persisted to the present day, with economists and politicians across the political spectrum trying to make sense of the Nixon Shock and its impact on monetary policy in the light of the financial crisis of 2007–08.