The Asaf Jah Dynasty was founded by Mir Qamar-ud-Din Siddiqi, a viceroy of the Deccan under the Mughal Empire from 1713 to 1721. He intermittently ruled after Aurangzeb's death in 1707. In 1724, Mughal control lapsed, and Asaf Jah declared himself independent in Hyderabad.

Following the decline of the Mughal power, India saw the rise of Maratha Empire. The Nizam himself saw many invasions by the Marathas, which resulted in the Nizam paying a regular tax (Chauth) to the Marathas. The major battles fought between the Marathas and the Nizam include Palkhed, Udgir, Rakshasbhuvan, and Kharda, in all of which the Nizam lost.[1][2]

In 1947, at the time of the partition of India, Britain offered the 566 princely states in the sub-continent the option of acceding to either India or Pakistan, or remaining independent.

Hyderabad was the largest and most prosperous state of all princely states in India. It covered 82,698 square miles (214,190 km2) of fairly homogeneous territory and had a population of roughly 16.34 million people (as per the 1941 census), of which a majority (85%) was Hindu. Hyderabad State had its own army, airline, telecommunication system, railway network, postal system, currency and radio broadcasting service. In spite of the overwhelming Hindu majority, Hindus were severely under-represented in government, police and the military. Of 1765 officers in the State Army, 1268 were Muslims, 421 were Hindus, and 121 others were Christians, Parsis and Sikhs. Of the officials drawing a salary between Rs.600-1200 per month, 59 were Muslims, 5 were Hindus and 38 were of other religions. The Nizam and his nobles, who were mostly Muslims, owned 40% of the total land in the state

The Nizam decided to keep Hyderabad independent, unlike the other princely states, most of which acceded to India or to Pakistan voluntarily. The leaders of the new Indian Union did not want an independent - and possibly hostile - state in the heart of their new country, and were determined to assimilate Hyderabad into the Indian Union, by force if necessary. In September 1948, in Operation Polo, the Indian Army marched into Hyderabad, deposed the Nizam, and annexed the state into the Indian Union.[3][4]

Seven Nizams ruled Hyderabad for two centuries until 1947. The Asaf Jahi rulers were great patrons of literature, art, architecture, and culture, and rich food. The Nizams patronized aspects of a Persianate society, copied from their Turco-Mongol Mughal overlords, and which became central to the Hyderabadi Muslim identity. The last Nizam had been the richest man in the world in his time.[5] The Nizams also developed the railway, and the introduction of electricity; developed roads, airways, irrigation and reservoirs; in fact, all major public buildings in Hyderabad City were built during his reign under the British Raj. He pushed education, science, and establishment of Osmania University.

Origin of the title

Nizām-ul-mulk was a title first used in Urdu around 1600 to mean Governor of the realm or Deputy for the Whole Empire. The word is derived from the Arabic language, as in Abu Ali Hasan ibn Ali Tusi (11 April 1018 – 14 October 1092), better known by his honorific title of Nizam al-Mulk (Arabic: نظام‌الملک, "Order of the Realm"), Nizām (نظام), meaning order, arrangement. The Nizam was referred to as Ala Hadrat / Ala Hazrat or Nizam Sarkar, meaning His Exalted Highness.

Rise of the Nizams

The first Nizam ruled on behalf of the Mughal emperors. After the death of Aurangzeb, the Nizams split from the Mughals to form an independent kingdom. When the British achieved paramountcy over India, the Nizams were allowed to continue to rule their princely states as client kings. The Nizams retained internal power over Hyderabad State until 17 September 1948 when Hyderabad was integrated into the new Indian Union.

The Asaf Jah dynasty had only seven rulers; however there was a period of 13 years after the rule of the first Nizam when three of his sons (Nasir Jung, Muzafar Jung and Salabath Jung) ruled. They were not officially recognised as the rulers.

A legend about the first Nizam states that, on one of his hunting trips he was offered some kulcha oval bread (an Indian bread) by a holy man and was asked to eat as many as he could. The Nizam could eat seven kulchas and the holy man then prophesied that seven generations of his family would rule the state.

By tradition no Nizam has ever left India no matter how good a reason might exist for doing so, as it was said, "the Sovereign is too precious to his people ever to leave India." After the Nizam family, the next group in the hierarchy was the Paigah family. The royal family had matrimonial relations only with them and were the closest group of nobles during the Nizam's period. 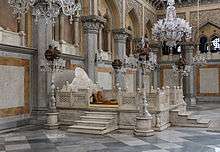 The Nizam's of Hyderabad throne in Chowmahalla Palace

During the period of Nizam rule, Hyderabad State became the richest. Osman Ali Khan, Asaf Jah VII and his family including Salar Jung I were taught by Nawab Sarwar Ul Mulk and Agha Mirza Baig Bahadur, who was his political advisor,[6] and the senior-most salute state among the Indian princely states. It was spread over 223,000 km2 (86,000 sq mi) in the Deccan, ruled by the Asaf Jahi dynasty. The Nizams were conferred with the title of His Exalted Highness, and "Faithful Ally of the British Government" by the imperial-colonial British government for their collaborating role in the wars against Tipu Sultan of Mysore, the First war of Indian Independence of 1857–1858,[7] becoming the only Indian prince to be given both these titles.[8] The rule of the Nizams brought cultural and economic growth for Hyderabad city. One example of the wealth of Nizam rule is the Jewels of the Nizams, which is an international tourist attraction occasionally displayed in Salar Jung Museum. In 1948 Hyderabad state had an estimated population of 17 million (1.7 crore), and it generated an estimated annual revenue of £90,029,000.[7] The state had its own currency known as the Hyderabadi rupee, until 1951.[9] The pace at which the last Nizam Mir Osman Ali Khan amassed wealth made him one of the world's richest men in 1937 and he was also known for his miserliness.[8] He was estimated to be worth ₹660 crores (roughly US$2 billion by the then exchange rates).[10] According to the Forbes All-Time Wealthiest List of 2008, Nizam Mir Osman Ali Khan is the fifth richest man in recorded history per the figures, with an estimated worth of US$210.8 billion adjusted by Forbes as per the growth of the US GDP since that period and the present exchange-rate of the US dollar against the Indian rupee.[9] The Nizams set up numerous institutions in the name of the dynasty including hospitals and schools, colleges, universities that imparted education in Urdu.[9] Inspired by the Indian Civil Service, the Nizams established their own local Hyderabad Civil Service. They were great engineers: for example, they built large reservoirs. Survey work on the Nagarjuna Sagar Dam was initiated during this time, although the actual work was actually completed under the aegis of the Government of India in 1969.[11][12] 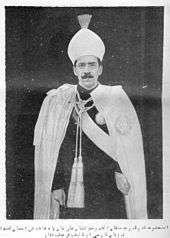 On 22 February 1937 a cover story by TIME called Osman Ali Khan, Asif Jah VII as the wealthiest man in the world

The last Nizam, Osman Ali Khan, Asif Jah VII, had 28 sons and 44 daughters. The Asaf Jah dynasty followed the Order of Precedence of male primogeniture regardless of the mother's marital status or rank. Among his children were Azam Jah, Prince of Berar (21 February 1907 – 9 October 1970) the eldest son.

Although many Muslim princes would have welcomed a matrimonial alliance with the Nizam's family, the Nizam's daughters had been married traditionally to young men of the Paigah family. This family belonged to the Sunni sect, and from the second Nizam's time they had been personal bodyguards of the Nizam.

italics – Considered pretenders by most historians; refrained from exercising traditional authority during their reigns.[13]

Palaces of the Nizams

The Asaf Jahis were prolific builders. Several palaces of the Nizams were:

Other landmarks include the High Court of Judicature at Hyderabad, City College, Public Gardens, also known as Bagh-e-aam, Jubilee Hall, Asafia library, The Assembly building, Niloufer Hospital, the Osmania Arts College and the Osmania Medical College are among their notable constructions.

The Nizams liked the European style of architecture and created a fusion of European traditions with Hindu and Islamic forms and motifs.

End of the Dynasty and Removal of the Last Nizam 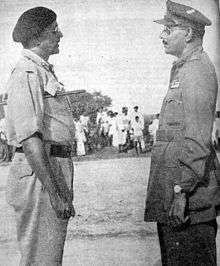 After the British left India in 1947, the Nizam of Hyderabad initially chose to join neither India nor Pakistan. He later declared Hyderabad a free, self-governing independent state but the Government of India, desirous of ending marginalization of the population under Nizam, refused to accept his point of view citing as reasons: Hyderabad being surrounded by India on all sides and not having an access to the sea. After extensive attempts by India to persuade the Nizam to accede to India failed, the Indian government finally launched a military operation named Operation Polo to overthrow his rule. When the Indian Army invaded his princely State on 13 September 1948, his overwhelmingly untrained forces were unable to withstand the Indian army and were defeated. The Nizam capitulated in surrendering his forces on 17 September 1948; that same afternoon he broadcast the news over the State radio network. The Nizam was forced to accept accession to the new Republic of India. His abdication on 17 September 1948 marked the end of the dynasty's ambitions. Mir Osman Ali Khan, the last Nizam, died on Friday 24 February 1967. All the Nizams are buried in royal graves at the Makkah Masjid near Charminar in Hyderabad excepting the last, Mir Osman Ali Khan, who wished to be buried beside his mother, in the graveyard of Judi Mosque facing King Kothi Palace opposite, befitting the rulers in time and place.

Places and things named after the Nizam