Nobeoka (延岡市, Nobeoka-shi) is a city located in the north of Miyazaki Prefecture, Japan.

On February 20, 2006, Nobeoka absorbed the towns of Kitakata and Kitaura (both from Higashiusuki District).

On March 31, 2007, the town of Kitagawa (also from Higashiusuki District) was also merged into Nobeoka.

Nobeoka has a humid subtropical climate (Köppen climate classification Cfa), which is hot and humid in the summer (above 30 °C (86 °F)) and is somewhat cold in the winter with temperatures dropping to around freezing (0 °C (32 °F)). Snowfall can be seen in the winter months, but does not accumulate because of coastal warming effects.

The city's economy depends strongly on the company Asahi Kasei, a producer of synthetic and industrial fibers. It is known regionally for its Ayu fish. 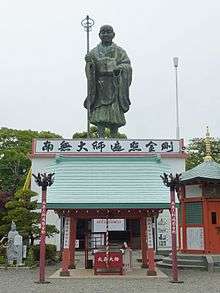 Nobeoka is serviced by the Higashikyushu Expressway which brings transportation time to Miyazaki City down to one hour and travel time to Oita City down to about 1 hour 30 minutes.

Nobeoka has its own municipal bus service with routes to most destinations in the city.