Miyazaki Prefecture (宮崎県, Miyazaki-ken) is a prefecture of Japan located on the island of Kyushu.[1] The capital is the city of Miyazaki.

Miyazaki Prefecture is located on the eastern coast of the island of Kyushu, surrounded by the Pacific Ocean to the south and east, Ōita Prefecture to the north, and Kumamoto and Kagoshima Prefectures to the west. It is one of only two locations on Earth where the fungus Chorioactis geaster is found.[3] Miyazaki is the home of the hyuganatsu fruit. 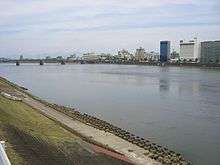 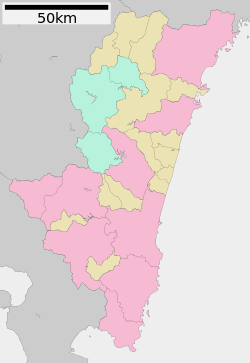 These are the towns and villages of each district:

The sports teams listed below are based in Miyazaki.