Miyazaki (宮崎市, Miyazaki-shi) is the capital city of Miyazaki Prefecture on the island of Kyushu in Japan. Located on the coast and crossed by several rivers, Miyazaki City enjoys scenic views of both ocean and nearby, verdant mountains. A popular resort destination for Japanese tourists, the city offers many attractions, including the SeaGaia event center (though the indoor ocean facility is no longer operational), the Phoenix Zoo, and many large hotels and onsens (public baths). The city is the primary shopping destination for eastern Kyushu residents in smaller towns around the prefecture. The city was founded on April 1, 1924.[1] 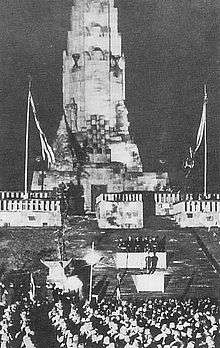 In 1940, the imperialist Shōwa regime constructed the 37 meter Hakkō Ichiu pillar upon the legendary site of Emperor Jimmu's palace. Located near Miyazaki, it was originally intended to symbolize the divine right of the Empire of Japan to "unify the eight corners of the world". The tower survived the war and is now the center piece of the Heiwadai-koen peace park.[4]

On January 1, 2006, the towns of Sadowara and Tano (both from Miyazaki District), and the town of Takaoka (from Higashimorokata District) were merged into Miyazaki.

Located on its grounds is the Misogi-ike, Pound of Purification, that according to legend is the birthplace of the sun goddess Amaterasu.

Miyazaki has a warm humid temperate climate with hot, humid summers and cool winters. During the summer, the city is particularly prone to typhoons, one of which drenched the city with 587.2 millimetres (23.12 in) of rain in one day on 16 October 1939. The wettest month since records began has been September 1886 with 1,259.3 millimetres (49.58 in) and the driest December 1988, which stands as the only month with no measurable precipitation.