The Northern Qi (simplified Chinese: 北齐; traditional Chinese: 北齊; pinyin: Běi Qí; Wade–Giles: Pei3-Ch'i2) was one of the Northern dynasties of Chinese history and ruled northern China from 550 to 577. The dynasty was founded by Emperor Wenxuan, and it was ended following attacks from Northern Zhou. 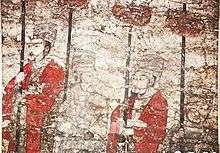 Mural painting from the tomb of Kao Yang.

Murals from a tomb of Northern Qi Dynasty (550-577 AD) in Jiuyuangang, Xinzhou, showing a rural hunting scene on horseback 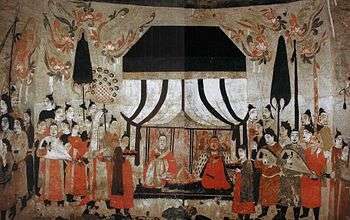 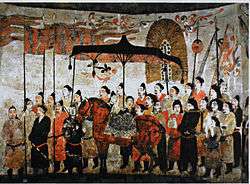 Northern Qi was the strongest state of the three main Chinese states (the other two being Northern Zhou state and Chen Dynasty) when it was established. Northern Qi however was plagued by violence and/or incompetent emperors (in particular Houzhu),[7] corrupt officials, and deteriorating armies. In 571, an important official who guide the emperors Emperor Wucheng and Houzhu, He Shikai, was killed. Houzhu attempted to strengthen the power of throne, instead he triggered a series of purges that became violent in late 573.[7]

In 577, Northern Qi was assaulted by Northern Zhou, a kingdom with poorer resources.[8] The Northern Qi, with ineffective leadership, quickly disintegrated within a month, with large scale defections of court and military personnel.[9] Both Houzhu and the last emperor Youzhu were captured, and both died in late 577. Emperor Wenxuan's son Gao Shaoyi, the Prince of Fanyang, under protection by Tujue, later declared himself the emperor of Northern Qi in exile, but was turned over by Tujue to Northern Zhou in 580 and exiled to modern Sichuan. It is a matter of dispute whether Gao Shaoyi should properly be considered a Northern Qi emperor, but in any case the year 577 is generally considered by historians as the ending date for Northern Qi. 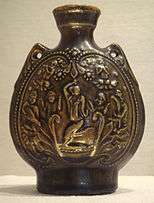 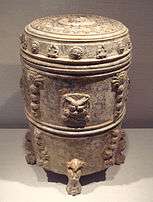 Northern Qi ceramics mark a revival of Chinese ceramic art, following the disastrous invasions and the social chaos of the 4th century.[15] Northern Qi tombs have revealed some beautiful artifacts, such as porcellaneous ware with splashed green designs, previously thought to have been developed under the Tang dynasty.[13]

Markedly unique from earlier depictions of the Buddha, Northern Qi statues tend to be smaller, around three feet tall, and columnar in shape.[16]

A jar has been found in a Northern Qi tomb, which was closed in 576 CE, and is considered as a precursor of the Tang Sancai style of ceramics.[17]

Also, brown glazed wares designed with Sasanian-style figures have been found in these tombs.[13] These works suggest a strong cosmopolitanism and intense exchanges with Western Asia, which are also visible in metalworks and relief sculptures across China during this period.[13] Cosmopolitanism was therefore already current during the Northern Qi period in the 6th century, even before the advent of the notoriously cosmopolitan Tang dynasty, and was often associated with Buddhism.[13][18] 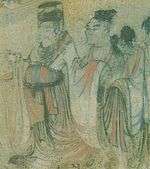 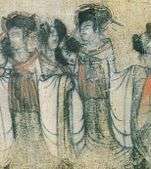 Details of the mural painting describes a nobility outing, discovered in the tomb of Ts'ui Fên.

The Northen Qi, although founded by a ruler of mixed Han/Xianbei origin, strongly asserted their Xianbei ethnic cultural identity. They regarded surviving ethnic Tuoba (themselves also Xianbei) and non-Chinese of the Northern Wei court and as well as literati of all ethnicities as near Chinese, referring to them as Haner (漢兒).[9] However they made use of Chinese and sometimes Central Asian courtiers.[19] While some Qi elite families had expressed strongly anti-Chinese sentiments, they may also lay claim to Chinese elite origin.[7] Emperor Wenxuan's father Gao Huan himself, who was reported as having said to his soldiers in the Xianbei language: "The Chinese are your slaves",[20][21] was descended from the Han Chinese Gao family of Bohai (渤海高氏) in what is now modern Hebei.[22] He had became Xianbeified as his family had lived for some time in Inner Mongolia after his grandfather was relocated from Bohai.[23][24]

A Chinese scholar translated the Buddhist text Nirvana Sutra text into a Turkic language during this era. Some Zoroastrianism influences that went into previous states continued onto the state of Northern Qi court, such as the love for Persian dogs (sacred in Zoroastrianism) as they were taken as pets by nobles and eunuchs. The Chinese utilized a number of Persian artifacts and products.[25]