Western Asia, West Asia, Southwestern Asia or Southwest Asia is the westernmost subregion of Asia. The concept is in limited use, as it significantly overlaps with the Middle East (or Near East), the main difference being the exclusion of Egypt (which would be counted as part of North Africa). The term is sometimes used for the purposes of grouping countries in statistics.

The total population of Western Asia is estimated at about 300 million as of 2015.

In an unrelated context, the term is also used in ancient history and archaeology to divide the Fertile Crescent into the "Asiatic" or "Western Asian" cultures as opposed to ancient Egypt.

However, the term "Western Asia" is mostly used as a convenient division of contemporary sovereign states into a manageable number of world regions for statistical purposes; it is sometimes used instead of the more geopolitical term "Middle East", for example by the United Nations Statistics Division (UNSD) statistics office or Canada's government.[1] 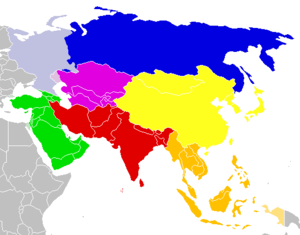 The UNSD notes that the "assignment of countries or areas to specific groupings is merely for statistical convenience and does not imply any assumption regarding political or other affiliation of countries or territories."[5] The countries and territories in the UNSD subregion of Western Asia,[6] listed below:

"Western Asia" was in use as a geographical term in the early 19th century, even before "Near East" became current as a geopolitical concept.[7] In the context of the history of classical antiquity, "Western Asia" could mean the part of Asia known in classical antiquity, as opposed to the reaches of "interior Asia", i.e. Scythia, and "Eastern Asia" the easternmost reaches of geographical knowledge in classical authors, i.e. Transoxania and India.[8] In the 20th century, "Western Asia" was used to denote a rough geographical era in the fields of archaeology and ancient history, especially as a shorthand for "the Fertile Crescent excluding Ancient Egypt" for the purposes of comparing the early civilizations of Egypt and the former.[9]

Use of the term in the context of contemporary geopolitics or world economy appears to date from the 1960s.[10]

Western Asia is located directly south of Eastern Europe. The region is surrounded by seven major seas; the Aegean Sea, the Black Sea, the Caspian Sea, the Persian Gulf, the Arabian Sea, the Red Sea, and the Mediterranean Sea.

To the north, the region is delimited from Europe by the Caucasus Mountains, to the southwest, it is delimited from Africa by the Isthmus of Suez, while to the east, the region adjoins Central Asia and South Asia. The Dasht-e Kavir and Dasht-e Lut deserts in eastern Iran naturally delimit the region somewhat from Asia itself.

European geographers historically viewed the North Caucasus as part of Western Asia, as well as much of what is today European Russia. 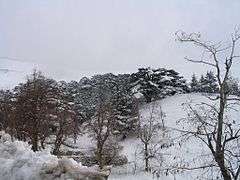 A Lebanese cedar forest in winter. 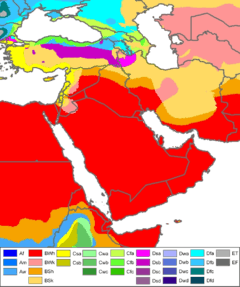 Western Asia is primarily arid and semi-arid, and can be subject to drought, but it also contains vast expanses of forest and fertile valleys. The region consists of grasslands, rangelands, deserts, and mountains. Water shortages are a problem in many parts of West Asia, with rapidly growing populations increasing demands for water, while salinization and pollution threaten water supplies.[11] Major rivers, including the Tigris and Euphrates, provide sources for irrigation water to support agriculture.

There are two wind phenomena in Western Asia: the sharqi and the shamal. The sharqi (or sharki) is a wind that comes from the south and southeast. It is seasonal, lasting from April to early June, and comes again between late September and November. The winds are dry and dusty, with occasional gusts up to 80 kilometers per hour (50 miles per hour) and often kick up violent sand and dust storms that can carry sand a few thousand meters high, and can close down airports for short periods of time. These winds can last for a full day at the beginning and end of the season, and for several days during the middle of the season. The shamal is a summer northwesterly wind blowing over Iraq and the Persian Gulf states (including Saudi Arabia and Kuwait), often strong during the day, but decreasing at night. This weather effect occurs anywhere from once to several times a year.[12]

Western Asia contains large areas of mountainous terrain. The Anatolian Plateau is sandwiched between the Pontus Mountains and Taurus Mountains in Turkey. Mount Ararat in Turkey rises to 5,137 meters. The Zagros Mountains are located in Iran, in areas along its border with Iraq. The Central Plateau of Iran is divided into two drainage basins. The northern basin is Dasht-e Kavir (Great Salt Desert), and Dasht-e-Lut is the southern basin.

In Yemen, elevations exceed 3,700 meters in many areas, and highland areas extend north along the Red Sea coast and north into Lebanon. A fault-zone also exists along the Red Sea, with continental rifting creating trough-like topography with areas located well-below sea level.[13] The Dead Sea, located on the border between the West Bank, Israel, and Jordan, is situated at 418 m (1371 ft) below sea level, making it the lowest point on the surface of the Earth.[14]

Rub' al Khali, one of the world's largest sand deserts, spans the southern third of the Arabian Peninsula in Saudi Arabia, parts of Oman, the United Arab Emirates and Yemen. Jebel al Akhdar is a small range of mountains located in northeastern Oman, bordering the Gulf of Oman.

Three major tectonic plates converge on Western Asia, including the African, Eurasian, and Arabian plates. The boundaries between the tectonic plates make up the Azores-Gibraltar Ridge, extending across North Africa, the Red Sea, and into Iran.[15] The Arabian Plate is moving northward into the Anatolian plate (Turkey) at the East Anatolian Fault,[16] and the boundary between the Aegean and Anatolian plate in eastern Turkey is also seismically active.[15]

Several major aquifers provide water to large portions of Western Asia. In Saudi Arabia, two large aquifers of Palaeozoic and Triassic origins are located beneath the Jabal Tuwayq mountains and areas west to the Red Sea.[17] Cretaceous and Eocene-origin aquifers are located beneath large portions of central and eastern Saudi Arabia, including Wasia and Biyadh which contain amounts of both fresh water and saline water.[17] Flood or furrow irrigation, as well as sprinkler methods, are extensively used for irrigation, covering nearly 90,000 km² across Western Asia for agriculture.[18]

The population of Western Asia was estimated at 272 million as of 2008, projected to reach 370 million by 2030 by Maddison (2007; the estimate excludes the Caucasus and Cyprus). This corresponds to an annual growth rate of 1.4% (or a doubling time of 50 years), well above the world average of 0.9% (doubling time 75 years). The population of Western Asia is estimated at about 4% of world population, up from about 39 million at the beginning of the 20th century, or about 2% of world population at the time.[19]

Culturally, Western Asia is predominantly Arab, Persian, Turkish, and the dominating languages are correspondingly Arabic, Persian and Turkish, each with of the order of 70 million speakers, followed by smaller communities of Hebrew, Iranian and Turkic speakers, the largest of which are the Kurds and the Azerbaijanis. The dominance of Arabic and Turkish is the result of the medieval Arab and Turkic invasions which displaced the formerly dominant Aramaic and Hebrew in the Levant, and Greek in Anatolia, although Hebrew is once again the dominant language in Israel, and Aramaic and Greek both remain present in their respective territories as small minority languages.

The West Asian Tennis Federation regulates the championships and leagues in the region.

The West Asian Billiards & Snooker Federation regulates the championships related to billiards and snooker, amongst which an annual tournament.

The West Asia Basketball Association organizes the WABA Championship since 1999. 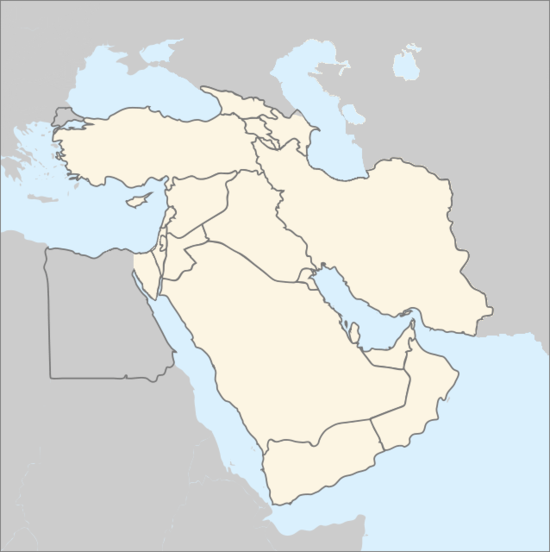