The Norwegian Armed Forces (Norwegian: Forsvaret, "The Defence") is the military organisation responsible for the defence of Norway. It consists of five branches, the Norwegian Army, the Royal Norwegian Navy, which includes the Coast Guard, the Royal Norwegian Air Force, the Home Guard and the Cyber Force, as well as several joint departments. The armed forces number 23,000 personnel, including civilian employees, and have a full-mobilisation combat strength of 83,000.[4]

The armed forces are subordinate to the Ministry of Defence, led by Ine Marie Eriksen Søreide. The formal commander-in-chief is King Harald V; however, the de facto commander-in-chief is Chief of Defence Haakon Bruun-Hanssen. His staff is located at Akershus Fortress in Oslo, while the Norwegian Joint Headquarters, responsible for commanding operations, is located in Bodø. The main naval base is Haakonsvern in Bergen, the main army camps are in Bardu, Målselv and Rena, and the main air station is Ørland.

An organised military was first assembled in Norway in the 9th century and was early focused around naval warfare. The army was created in 1628 as part of Denmark–Norway, followed by two centuries of regular wars. A Norwegian military was established in 1814, but the military did not see combat until the German occupation of Norway in 1940. Norway abandoned its position as a neutral country in 1949 to become a founding member of the North Atlantic Treaty Organisation (NATO). The Cold War saw a large build-up of air stations and military bases, especially in Northern Norway. Since the 2000s, the military has transformed from a focus on defence from an invasion to a mobile force for international missions. Among European NATO members, the military expenditure of US$7.2 billion is the highest per capita.

The Chief of Defence (a four-star general or admiral) heads the armed forces, and is the principal military adviser to the Minister of Defence.

Military branches (in order of seniority):

Other main structures, include:

Norway employs a weak form of mandatory military service for men and women. While 63,841 men and women were called in for the examination of persons liable for military service in 2012 (mandatory for men), 9265 were conscripted.[6] In 2015 conscription was extended to women making Norway the first NATO member and first European country to make national service compulsory for both men and women.[7] There is a right of conscientious objection. 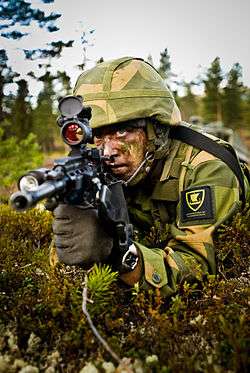 Norwegian soldier during a field exercise

The Armed Forces ordered a Meatless Monday in November 2013, where only vegetarian rations are served. The press statements read, that this serves as a mean to “fight climate change”.[11][12]