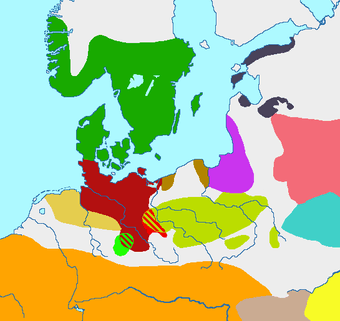 The Oksywie culture (ger. Oxhöft-Kultur) was an archaeological culture that existed in the area of modern-day Eastern Pomerania around the lower Vistula river from the 2nd century BC to the early 1st century AD. It is named after the village of Oksywie, now part of the city of Gdynia in northern Poland, where the first archaeological finds typical of this culture were discovered.

Archaeological research during the last few decades near Pomerania in Poland suggests that the transition of the local component of the Pomeranian culture into the Oksywie culture occurred in the 2nd century BC. A connection with the Rugii has been suggested.

Like other cultures of this period, the Oksywie culture related to La Tène cultural characteristics, and possessed traits typically shown from the Baltic cultures. Oksywie culture's ceramics and burial customs indicate strong ties with the Przeworsk culture. Men only had their ashes placed in well made black urns with fine finish and a decorative band around. Their graves were supplied with practical items for the afterlife such as utensils and weapons. Typically buried with the man, this culture would also place swords with one-sided edge, and the graves were often covered or marked by stones. Women's ashes were buried in hollows and supplied with feminine items.