The Funnel(-neck-)beaker culture, in short TRB or TBK (German: Trichter(-rand-)becherkultur, Dutch: Trechterbekercultuur; ca 4300 BC–ca 2800 BC) was an archaeological culture in north-central Europe. It developed as a technological merger of local neolithic and mesolithic techno-complexes between the lower Elbe and middle Vistula rivers, introducing farming and husbandry as a major source of food to the pottery-using hunter-gatherers north of this line. It was preceded by Lengyel-influenced Stroke-ornamented ware culture (STK) groups/Late Lengyel and Baden-Boleráz in the southeast, Rössen groups in the southwest and the Ertebølle-Ellerbek groups in the north.

The TRB techno-complex is divided into a northern group including modern northern Germany and southern Scandinavia (TRB-N, roughly the area that previously belonged to the Ertebølle-Ellerbek complex), a western group in the Netherlands between the Zuiderzee and lower Elbe that originated in the Swifterbant culture, an eastern group centered on the Vistula catchment, roughly ranging from Oder to Bug, and south-central groups (TRB-MES, Altmark) around the middle and upper Elbe and Saale. Especially in the southern and eastern groups, local sequences of variants emerged. In the late 4th millennium BC, the Globular Amphora culture (KAK) replaced most of the eastern and subsequently also the southern TRB groups, reducing the TRB area to modern northern Germany and southern Scandinavia. The younger TRB in these areas was superseded by the Single Grave culture (EGK) at about 2800 BC. The north-central European megaliths were built primarily during the TRB era.

The Funnelbeaker culture is named for its characteristic ceramics, beakers and amphorae with funnel-shaped tops, which were found in dolmen burials.

The TRB ranges from the Elbe catchment in Germany and Bohemia with a western extension into the Netherlands, to southern Scandinavia (Denmark up to Uppland in Sweden and the Oslofjord in Norway) in the north and to the Vistula catchment in Poland in the east.

Variants of the Funnelbeaker culture in or near the Elbe catchment area include the Tiefstich pottery group in northern Germany as well as the cultures of the Baalberge group (TRB-MES II and III; MES = Mittelelbe-Saale), the Salzmünde and Walternienburg and Bernburg (all TRB-MES IV) whose centres were in Saxony-Anhalt.

With the exception of some inland settlements such as Alvastra pile-dwelling, the settlements are located near those of the previous Ertebølle culture on the coast. It was characterised by single-family daubed houses ca 12 m x 6 m. It was dominated by animal husbandry of sheep, cattle, pigs and goats, but there was also hunting and fishing. One find assigned to the Funnelbeaker culture is the Bronocice pot from Poland, which shows the oldest known depiction of a wagon, presumably drawn by aurochs whose remains were found with the pot. Primitive wheat and barley was grown on small patches that were fast depleted, due to which the population frequently moved small distances. There was also mining (in the Malmö region) and collection of flintstone, which was traded into regions lacking the stone, such as the Scandinavian hinterland. The culture imported copper from Central Europe, especially daggers and axes. 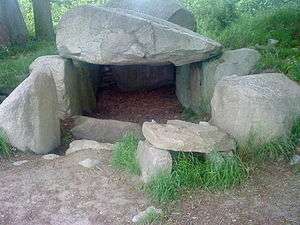 Dolmen in Lancken-Granitz, one of about 1,000 preserved TRB burial sites in Mecklenburg-Vorpommern

The houses were centered on a monumental grave, a symbol of social cohesion. Burial practices were varied, depending on region and changed over time. Inhumation seems to have been the rule. The oldest graves consisted of wooden chambered cairns inside long barrows, but were later made in the form of passage graves and dolmens. Originally, the structures were probably covered with a heap of dirt and the entrance was blocked by a stone. The Funnelbeaker culture marks the appearance of megalithic tombs at the coasts of the Baltic and of the North sea, an example of which are the Sieben Steinhäuser in northern Germany. The megalithic structures of Ireland, France and Portugal are somewhat older and have been connected to earlier archeological cultures of those areas. At graves, the people sacrificed ceramic vessels that contained food along with amber jewelry and flit-axes.

Flint-axes and vessels were also deposed in streams and lakes near the farmlands, and virtually all Sweden's 10,000 flint axes that have been found from this culture were probably sacrificed in water.

They also constructed large cult centres surrounded by pales, earthworks and moats. The largest one is found at Sarup on Fyn. It comprises 85,000 m2 and is estimated to have taken 8000 workdays. Another cult centre at Stävie near Lund comprises 30,000 m2.

In the context of the Kurgan hypothesis, the culture is seen as non-Indo-European, representing a culture of Neolithic origin, as opposed to the Indo-European-language-speaking peoples (see Yamna culture) who later intruded from the east. Marija Gimbutas postulated that the political relationship between the aboriginal and intrusive cultures resulted in quick and smooth cultural morphosis into the Corded Ware culture.[1] By contrast a number of other archaeologists in the past have proposed that the Corded Ware culture was a purely local development from Funnel Beaker.[2]

Thus the question of continuity versus migration at the cusp of the cultural change was of interest to geneticists specialising in ancient DNA. A sample of Corded Ware people from Germany has been modelled as approximately three-quarters Yamnaya, clear evidence of migration into the heartland of Europe from its eastern periphery.[3]

It has been suggested that the Funnelbeaker culture was the origin of the gene allowing adults of Northern European descent to digest lactose. It was claimed that in the area formerly inhabited by this culture, prevalence of the gene is virtually universal.[5] A paper published in 2007 by Burger et al.[6] indicated that the genetic variant that causes lactase persistence in most Europeans (-13,910*T) was rare or absent in early farmers from central Europe. A study published by Yuval Itan and colleagues in 2010 [7] clearly shows this. A study published in 2009, also by Itan et al.,[8] suggests that the Linear Pottery culture (also known as Linearbandkeramik or LBK), which preceded the TRB culture by some 1,500 years, was the culture in which this trait started to co-evolve with the culture of dairying.