This article is about the TV series. For the first spin-off film, see On the Buses (film).

On the Buses is a British sitcom created and written by Ronald Wolfe and Ronald Chesney (although stars Stephen Lewis and Bob Grant also wrote several episodes) broadcast from 1969 to 1973. It spawned three spin-off feature films and a stage version. Despite the writers' previous successes with The Rag Trade and Meet the Wife with the BBC, the corporation rejected On the Buses, not seeing much comedy potential in a bus depot as a setting. The comedy partnership turned to a friend, Frank Muir, Head of Entertainment at London Weekend Television, who loved the idea; the show was accepted and despite a poor critical reception became a hit with viewers.[1] In a 2004 poll to find Britain's Best Sitcom, On the Buses was rated 53rd.

The characters of On the Buses (left to right): Arthur, Olive, Stan, Mum, Jack and Blakey 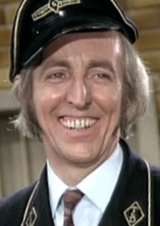 Seventy-four 25-minute episodes were made, as well as three spin-off films.

At the beginning of the seventh (and last) series Arthur, who is not seen, has left Olive and they are divorced. Olive again gets a job as a clippie on the buses as they are short of money. Stan takes a job in the north of England in a car factory in the "Goodbye Stan" episode, and the Inspector takes Stan's old room.

In addition, two five-minute Christmas specials were made by LWT as part of an All Star Comedy Carnival in 1969 and 1972, ITV's answer to the BBC's Christmas Night with the Stars programme. The 1969 edition has been lost, but the 1972 edition – featuring a goose that the cast are chasing for Christmas dinner – exists in the Thames Television archive, which is now owned by FremantleMedia. A spin-off series, Don't Drink the Water (1974–75), ran for thirteen episodes, featuring Blake retiring to Spain with his sister Dorothy (Pat Coombs).

Reg Varney undertook a PSV (now known as a PCV - Passenger Carrying Vehicle) driving test in order to be filmed driving the bus for the exterior scenes.

The earlier series were recorded at London Weekend Television's original studios in Wembley (now Fountain Studios). In late 1972, LWT relocated to new studios on the South Bank of the River Thames; here the outside doors to the main and secondary studios were too small to accommodate the double-decker buses used in the series. Therefore, single decker buses were used and a plywood mock up of an upper deck was lowered from a lighting rig.

Filmed external shots were part of the series. LWT arranged with the now defunct Eastern National Omnibus Company to use its buses at the long-gone Wood Green bus garage in north London. They were shown as belonging to Luxton and District. Luxton is supposed to be in Essex, and actual Essex towns including Southend-on-Sea, Basildon, Braintree and Tilbury are all mentioned. One of the bus route termini was "Cemetery Gates", for which LWT used the entrance to Lavender Hill Cemetery. A different Lavender Hill in Battersea also features in the last episode of the last series, featuring the town hall, now the Battersea Arts Centre.

The fourth series was affected by the ITV colour strike, with seven of thirteen episodes being made in black and white.

The theme music for the series, entitled "Happy Harry", was written by Tony Russell.[2]

The films were set in a different canon to the series – in the films, Arthur and Olive manage to have a child despite their apparently sexless marriage and Arthur's operation - the three films follow a loose story arc which follows the child (Little Arthur) growing up. Olive is pregnant with a second child at the end of Mutiny, but no further mention of this was made in the third film. Arthur's operation is mentioned in the first film, but later Olive gives birth to their baby son. The bus depot becomes The Town & District Bus Company instead of The Luxton & District Traction Company. The buses in the films are mostly red ones and one green one (not counting the Windsor Safari Park tour bus in Mutiny On The Buses).

The format of On the Buses was sold to America, where it was remade by NBC as Lotsa Luck, starring Dom DeLuise as Stanley Belmont with Kathleen Freeman as Iris Belmont, his mum, Wynn Irwin as Arthur Swann, Beverly Sanders as Olive Swann and Jack Knight as Bummy Pfitzer, his best friend. After a pilot was made, it ran for one series of 22 episodes in 1973–74. Episodes based on the original On The Buses scripts were adapted by such American writers as Carl Reiner, Bill Persky and Sam Denoff. The American version was unsuccessful and has never been screened in Britain. Inspector Blake did not appear in the American version, as Stan worked at the lost property office at the bus depot rather than being a driver.

Despite the popularity of On the Buses with sections of the public, TV reviewers and historians have generally held the show in lower regard.[3] In its section on situation comedies, The Guinness Book of Classic British TV describes On the Buses as ITV's "longest running and most self-consciously unfunny series".[3] TV reviewer Victor Lewis-Smith later criticised the then head of London Weekend Television, Frank Muir, for green-lighting the programme, which Lewis-Smith called "the wretched On the Buses".[4] Daily Telegraph journalist Max Davidson, discussing 1970s British comedy, listed On the Buses as one of the "unfunny sitcoms of the time",[5] while The Guardian's David Stubbs referred to On the Buses as "a byword for 70s sitcom mediocrity".[6]

The red Town & District buses were Bristol KSWs with Eastern Coach Works bodies. These were ex-Eastern National. Stan and Jack's "regular" bus appeared to be VNO 857.

The green Luxton & District buses were Bristol Lodekkas with bodywork by Eastern Coach Works of Lowestoft. In reality these were Eastern National buses (in some episodes buses could be seen with Eastern National on the side), although as mentioned earlier, the later interior depot shots were in fact 'dummy' buses. Some 'dummy' buses were real single deck buses with a wooden frame on top, such as in the Series 3 episode "Radio Control", when the bus has crashed into the bridge. The most commonly used bus in the series was AVW 399F. In later episodes the NBC symbol appears next to Luxton & District.

In the first episode of series 6, former London Transport bus RTL1557 (OLD 666) is featured and burnt out.

A stage play called Busman's Holiday, written by Sam Cree, starred Stephen Lewis, Bob Grant and Anna Karen. It was performed as a 1973 summer season at the Pavilion Theatre, Torquay. All of the character names were different from those in the original television series.

Look-in, a UK children's magazine, serialised On the Buses in comic strips between August 1971–May 1974). They were drawn by cartoonist Harry North and the TV series' often bawdy, sexist humour was suitably diluted for a younger audience.

A board game of On the Buses was released by Denys Fisher games in 1973.

In 1990 there were plans to revive the series as Back on the Buses, and the original cast appeared on Wogan to promote the new series. However, although a pilot script was written, it wasn't made. Back On The Buses was to feature Stan Butler, having run his own business for some years and made some money, starting his own bus company in the newly deregulated market, and hiring Jack to work with him. As they attempt to get the company off the ground, they discover a rival company has set up in the town, owned by none other than Blakey. The comedy in the series would have come from the conflict between the two businesses, and how Stan and Jack attempted to battle Blakey's bigger and more professional outfit.

Visual Entertainment released On the Buses: The Ultimate Collection, an eleven-disc box set featuring the complete series on DVD on 12 September 2006.

Network DVD released On the Buses: The Complete Series box set on DVD on 13 November 2006 for the very first time. On 25 May 2008 the box set was re-released in a new repackaged version. They have also released each series individually.

Beyond Home Entertainment released the entire series on DVD in seven series sets between 2 July 2007–8 April 2009. In 2010 they released The Complete Series 11-DVD box set.

The original series has been repeated quite often on ITV3 since 2009, still being shown in 2016.

Fox Classics on the Australian Fox cable network regularly shows the series, with the latest run commencing on 5 March 2016.