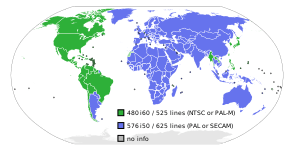 SDTV resolution by nation; due to historical reasons, different countries use either 480i or 576i as the standard-definition picture format.

In North America, digital SDTV is broadcast in the same 4:3 aspect ratio as NTSC signals with widescreen content being center cut.[1] However, in other parts of the world that used the PAL or SECAM color systems, standard-definition television is now usually shown with a 16:9 aspect ratio, with the transition occurring between the mid-1990s and mid-2000s. Older programs with a 4:3 aspect ratio are broadcast with a flag that switches the display to 4:3 (some broadcasters prefer to reduce the horizontal resolution by anamorphically scaling the video into a pillarbox).

Standards that support digital SDTV broadcast include DVB, ATSC, and ISDB. The last two were originally developed for HDTV, but are more often used for their ability to deliver multiple SD video and audio streams via multiplexing, than for using the entire bitstream for one HD channel.

For SMPTE 259M-C compliance, a SDTV broadcast image is scaled to 720 pixels wide (with only 704 center pixels containing the image with 16 pixels reserved for horizontal blanking, a number of broadcasters fill the whole 720 frame) for every 480 NTSC (or 576 PAL) lines of the image with the amount of non-proportional line scaling dependent on either the display or pixel aspect ratio. The display ratio for broadcast widescreen is commonly 16:9 (with a pixel ratio of 40:33 for anamorphic), the display ratio for a traditional or letterboxed broadcast is 4:3 (with a pixel aspect ratio of 10:11).

An SDTV image outside the constraints of the SMPTE standards requires no non-proportional scaling with 640 pixels (as defined by the adopted IBM VGA standard) for every line of the image. The display and pixel aspect ratio is generally not required with the line height defining the aspect. For widescreen 16:9, 360 lines define a widescreen image and for traditional 4:3, 480 lines define an image.

Digital SDTV in 4:3 aspect ratio has the same appearance as regular analog TV (NTSC, PAL, SECAM) without the ghosting, snowy images and white noise. However, if the reception has interference or is poor, where the error correction can not compensate one will encounter various other artifacts such as image freezing, stuttering or dropouts from missing intra-frames or blockiness from missing macroblocks. The audio encoding is the last to suffer loss due to the lower bandwidth requirements.

Television signals are transmitted in digitally encoded form, and the lines are scaled to fit SMPTE SDI bandwidth requirements, as opposed to unrestricted uses such as when lines are rendered or overlaid to a modern computer monitor and modern SMPTE implementations of HDTV. The table below summarizes pixel aspect ratios for the scaling of various kinds of SDTV video lines. Note that the actual image (be it 4:3 or 16:9) is always contained in the center 704 horizontal pixels of the digital frame, regardless of how many horizontal pixels (704 or 720) are used. In case of digital video line having 720 horizontal pixels, only the center 704 pixels contain actual 4:3 or 16:9 image, and the 8 pixel wide stripes from either side are called nominal analogue blanking for horizontal blanking and should be discarded before displaying the image. Nominal analogue blanking should not be confused with overscan, as overscan areas are part of the actual 4:3 or 16:9 image.