The organization comprises 57 member states and governments, three associate members and twenty observers. The term francophonie (with a lowercase "f"), or francosphere (often capitalised in English) also refers to the global community of French-speaking peoples,[5] comprising a network of private and public organizations promoting equal ties among countries where French people or France played a significant historical role, culturally, militarily or politically.

French geographer Onésime Reclus, brother of Élisée Reclus, coined the word Francophonie in 1880 to refer to the community of people and countries using the French language. Francophonie was then coined a second time by Léopold Sédar Senghor, founder of the Négritude movement, in the review Esprit in 1962, who assimilated it into Humanism.[6][7]

The modern organisation was created in 1970. Its motto is égalité, complémentarité, solidarité ("equality, complementarity, and solidarity"),[1] a deliberate allusion to France's motto liberté, égalité, fraternité. Started as a small club of northern French-speaking countries, the Francophonie has since evolved into a global organization whose numerous branches cooperate with its member states in the fields of culture, science, economy, justice, and peace.

The convention which created the Agency for Cultural and Technical Co-operation (Agence de Coopération Culturelle et Technique) was signed on 20 March 1970 by the representatives of the 21 states and governments under the influence of African Heads of State, Léopold Sédar Senghor of Senegal, Habib Bourguiba of Tunisia, Hamani Diori of Niger and Prince Norodom Sihanouk of Cambodia.

The position of Secretary-General was created in 1997 at the seventh leaders' summit held in Hanoi. Canadian Jean-Louis Roy was secretary of the Agence de coopération culturelle et technique from 1989 until the formal creation of the Agence intergouvernementale de la Francophonie in 1997 with former Secretary-General of the United Nations Boutros Boutros-Ghali as the first secretary-general of La Francophonie. Abdou Diouf, the former president of the Republic of Senegal, became Secretary General in January 1, 2003. He was reelected on 29 September 2006, for a second mandate during the Summit of the Francophonie of Bucharest, and elected again in 2010 at the Summit of the Francophonie of Montreux for another mandate which ran until 31 December 2014. At the 2014 summit in Dakar, former Governor General of Canada Michaëlle Jean was chosen to lead the organization starting in January 2015.[9][10] 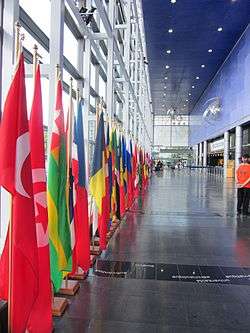 Flags of the Francophonie members.

The Summit, the highest authority in the Francophonie, is held every two years and gathers the Heads of states and governments of all member countries of the International Organization of the Francophonie around themes of discussion. It is chaired by the Head of state and government of the host country, and this person assumes that responsibility until the next Summit. By enabling the Heads of state and government to hold a dialogue on all of the international issues of the day, the Summit serves to develop strategies and goals of the Francophonie so as to ensure the organization's influence on the world scene.[12]

The Ministerial Conference of the Francophonie gathers the foreign or francophone affairs ministers of member states and governments every year to ensure the political continuity of the Summit. This conference ensures that the decisions made during the previous Summits are carried out and to plan the next Summit. It also recommends new members and observers to the Summit.[11]

The Permanent Council of the Francophonie gathers the Ambassadors of the member countries, chaired by the General Secretary of the Francophonie and under the authority of the Ministerial Conference, its main task is to plan Summits. This conference also supervises the execution of the Summit decisions made by the ministerial conferences on a day-to-day basis, about the examination of the propositions of the budget distribution.[11]

Agency of the Francophonie

The Agency of the Francophonie is the main operator of the cultural, scientific, technical, economic and legal cooperation programs decided at the Summits. It is also the legal seat of the Secretary General and is used by him as an administrative support. The agency also contributes to the development of the French language and to the promotion of the diverse languages and cultures of its members, while encouraging mutual understanding between them and the Francophonie. For this reason, it is a place of exchange and dialogue and its simultaneous in Francophone countries. The Agency's headquarters are in Paris and it has three regional branches in Libreville, Gabon; Lomé, Togo; and Hanoi, Vietnam.[19]

See also: Member states of the International Organization of the Francophonie

Members of and participants in the Francophonie. In addition to countries, Belgian and Canadian subdivisional memberships are also represented, in dark blue.

Established in 1961 in Montreal, the Association of Francophone Universities gathers institutions of higher education and research among the Francophone countries of Africa, the Arab world, Southeast Asia, Central and Eastern Europe, and the Caribbean.

Its mission is to contribute to the construction and consolidation of a scientific space in French. It supports the French language, cultural and linguistic diversity, law and democracy, and the environment and sustainable development. It also provides an important mobility program for the students, the researchers and the professors.[26]

Established in 2008 in The Hague, the Assemblée des francophones fonctionnaires des organisations internationales (AFFOI) gathers international civil servants from all international organisations of the world—such as United Nations, the European Commission of the African Union—and coming from the member countries of the Francophonie.[27]

Its mission is to support the French language and the linguistic diversity within International Organisations. Every year the association coordinates the day of French language within International Organisations.[28] It also organizes seminaries to increase awareness about the importance of linguistic, cultural and conceptual diversity. The president is the French international civil servant Dominique Hoppe.

TV5Monde is the first international French language television network, available in many countries. On television and online the audience of TV5Monde has grown rapidly. TV5 is one of the three largest television networks in the world (along with the BBC and CNN), and is considered one of the greatest achievements of the Francophonie.[29] It provides wide access to original television programmes in French, and contributes to the development of the language and French-speaking cultures. It broadcasts the different forms of the French language spoken around the world, with all their accents. It reaches beyond native speakers of French; the majority of those who can receive it and part of its audience comprise viewers for whom French is not the mother tongue. Thanks to subtitles in various languages, it provides access to the Francophonie to non-French speakers - it is translated into 12 languages.[30]

The International Association of French-speaking Mayors was created in Quebec City in 1979 on the initiative of Jean Pelletier and Jacques Chirac, then the respective mayors of Quebec City and Paris. It is an operating agency for urban development gathering 48 countries or governments. The goal is to establish close cooperation in all areas of municipal activities. Its missions are to strengthen local democracy, building municipal capacities, and to support the populations. The association pursues its actions in the domains of health, culture, youth and education, urban development, training, and municipal infrastructures.[31][32]

The project of creation of a French-speaking university in the service of the African development was presented and adopted following the Dakar Summit in 1989. The Senghor University is a private postgraduate institution that trains managers and high-level trainers in areas that are a priority for development in Francophone Africa.[33] It directs the capacities of the managers and trainers to the action and the exercise of responsibilities in certain domains for the development: the project management, the financial institutions, the environment, the nutrition-health and of the cultural heritage. The Senghor University organizes regularly seminaries to help its students and of the public specialized in the domains of its action, by collaborating with the other operators and the institutions of the Francophonie.[34] 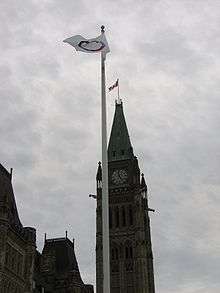 The Francophonie flag flying at the Parliament of Canada in Ottawa.

The Charte de la Francophonie defines the role and missions of the organization. The current charter was adopted in Antananarivo, on 23 November 2005. The summit held in Ouagadougou, Burkina Faso on 26–27 November 2004 saw the adoption of a strategic framework for the period 2004–2014.

The four missions drawn by the Summit of the Francophonie are:

The primary mission of the organization is the promotion of the French language as an international language and the promotion of worldwide cultural and linguistic diversity in the era of economic globalization. In this regard, countries that are members of the Francophonie have contributed largely to the adoption by the UNESCO of the Convention on the Protection and Promotion of the Diversity of Cultural Expressions (20 October 2005).

At the national level, there is the problem of promoting the French language within the context of its co-existence with other partner or international languages in most member countries, especially in Africa. Maintaining the relative importance of the status of French is an imperative that requires solidarity and the pooling of means and resources among countries committed to the French language within their respective societies.

Similar to the Commonwealth of Nations, the Francophonie has as its stated aims the promotion of democracy and human rights. Following the 3 November 2000 Déclaration de Bamako,[37] the Francophonie has given itself the financial means to attain a number of set objectives in that regard.

The Francophonie intends to contribute significantly to promoting peace, democracy and support for the rule of law and human rights by focusing on prevention. Political stability and full rights for all, the subject of the Bamako declaration, are considered key to sustainable development.

The Francophonie has chosen to provide its member countries with access to the expertise of its extensive intergovernmental, institutional, academic and non-governmental network with a view to building national capacities, resolving conflict and providing support for ending crises.[38]

In recent years, some participating governments, notably the governments of Canada and Quebec, pushed for the adoption of a Charter in order for the organization to sanction member States that are known to have poor records when it comes to the protection of human rights and the practice of democracy. Such a measure was debated at least twice but was never approved.

The International Organization of the Francophonie aims at connecting the various peoples using French as a common language through their knowledge. Education, like access to autonomy and information for all, begins with all children having access to a full primary education free of gender inequality. It involves an integrated approach of teaching and training from primary to secondary school that will lead to employment. Education policies must also give French an integral place alongside the partner languages. Last, the research potential of French-language academic streams must be promoted.[38]

The Francophonie is committed to working towards sustainable development by supporting the improvement of economic governance, capacity building, cooperation and the search for common positions in major international negotiations. It's necessary to manage durably the natural resources, particularly the energy and the water, and politics are established to make sure of the conservation of these resources with effective anti-poverty campaigns.[39]

In 2013, the United Nations Volunteers programme received a financial contribution from the Federal Public Service (FPS) Foreign Affairs, Foreign Trade and Development Cooperation of the Kingdom of Belgium for the years 2013 and 2014 to support the outreach to the francophone world and the promotion of volunteerism via its Online Volunteering service.[40]