Libreville is the capital and largest city of Gabon, in west central Africa. The city is a port on the Komo River, near the Gulf of Guinea, and a trade center for a timber region. As of 2013 its census population was 703,904.[1] 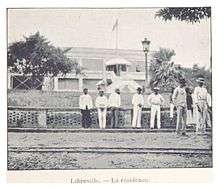 The area was inhabited by the Mpongwé tribe long before the French acquired the land in 1839. In 1846, the slave ship Elizia was captured by the French navy near Loango, and fifty-two of the freed slaves were resettled on the site of Libreville (French for "Freetown") in 1849. It was the chief port of French Equatorial Africa from 1934 to 1946 and was the central focus of the Battle of Gabon in 1940.

In 1910, French Equatorial Africa (Afrique équatoriale française, AEF) was created, and French companies were allowed to exploit the Middle Congo (modern-day Congo Brazzaville). It soon became necessary to build a railroad that would connect Brazzaville, the terminus of the river navigation on the Congo River and the Ubangui River, with the Atlantic coast. As rapids make it impossible to navigate on the Congo River past Brazzaville, and the coastal railroad terminus site had to allow for the construction of a deep-sea port, authorities chose the site of Ponta Negra instead of Libreville as originally envisaged. Construction of the Congo-Ocean Railway began in 1921, and Libreville was surpassed by the rapid growth of Pointe-Noire, farther down the coast.

Libreville was named in imitation of Freetown and grew only slowly as a trading post and a minor administrative centre to a population of 32,000 on independence in 1960. It only received its first bank branch when Bank of West Africa (BAO) opened a branch in 1930. Since independence, the city has grown rapidly and now houses nearly half the national population 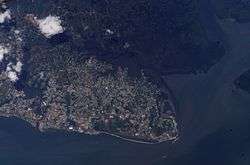 From north to south, major districts of the city are the residential area Batterie IV, Quartier Louis (known for its nightlife), Mont-Bouët and Nombakélé (busy commercial areas), Glass (the first European settlement in Gabon), Oloumi (a major industrial area) and Lalala, a residential area. The city's port and train station on the Trans-Gabon Railway line to Franceville lie in Owendo, south of the main built-up area. Inland from these districts lie poorer residential areas. North-west of the Equatorial Guinea is where the city stands, labeling the city as a part of North-west Gabon. In terms of the country's surrounding boundaries, north is Cameroon, east is Congo, and south-east is the Democratic Republic of the Congo. It also rides the shores of the South Atlantic Ocean, which is on the country's west coast for reference. Additionally, in terms of aquatic geography, the Komo River passes through the city and empties into the ocean. The Komo River also stands as a potential hydroelectric source of power for the city which could generate supportive amounts of energy and power. Several city districts provide distinct and separate benefits throughout the city as well. In terms of night life, the Quartier Louis sector is most renown. One of this zone's sides includes the coast and this heavily influences the possibilities in terms of activities available in the area. Commercial areas within Libreville are housed in the Mont-Bouët and Nombakélé which feature several shopping centers and stations selling purchasable goods. Industry within the capital city is heavy in Oloumi, integrating production separately from the districts that focus upon other aspects. Finally, Lalala and Batterie IV serve as residential and housing sectors, where much of the populous are placed.[2]

Libreville features a tropical monsoon climate with a lengthy wet season and a short dry season. Libreville's wet season spans about nine months (September through May), with a heavy amount of rain falling during these months. The city's dry season lasts from June through August and is caused by the cold Benguela Current reaching its northernmost extent and suppressing rainfall. Despite the lack of rain, Libreville remains very cloudy during this time of year.

As common with many cities with this climate, average temperatures remain relatively constant throughout the course of the year, with average high temperatures at around 29 °C (84 °F).

Libreville International Airport is the largest airport in Gabon and is located around 11 kilometres (6.8 mi) north of the city.

National Taxis operate around the city. Each district has a colour for its taxis and Libreville's is red.

The National Society of Transport (SOGATRA) just launched the new taxis that operate on a counter system.[4] 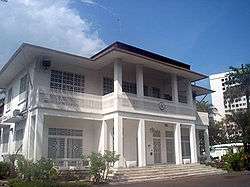 The Embassy of the United States in Libreville.

Sights in Libreville include:

Libreville's main market lies in Mont-Bouët. Gabon's school of administration and school of law are in Libreville. Libreville also hosts the Omar Bongo University (est. 1970), various research institutes and a library. Alongside the Komo estuary is the Pongara National Park of 929 km2. Behind Cap Esterias is Akanda National Park, famed for its large congregations of migrating waterbirds.

The city is served by Libreville Hospital.

There are several high-end international schools in Libreville, including:

Libreville is one of the few African cities where French is truly becoming a native language,[5] with some local features. 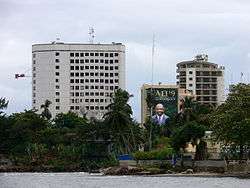 The city is home to a shipbuilding industry, brewing industry and sawmills. The city exports raw materials such as wood, rubber and cocoa from the city's main port, and the deepwater port at Owendo.[6]

Gabon Airlines has its headquarters in Libreville.[7] Prior to their dissolutions, both Air Gabon and Gabon Express were headquartered on the grounds of Libreville International Airport.[8][9]