Oriental (Berber: ⵜⴰⴳⵎⵓⴹⴰⵏⵜ, Tagmuḍant; Arabic: جهة الشرق; French: Oriental) is one of the twelve regions of Morocco, located in the northeastern part of the country. It covers an area of 90,127 km² and has a population of 2,314,346 (2014 census).

The name Oriental is a French word for "eastern", and comes directly from the Latin orientalis, "of the east", being that the region is located in the east of Morocco.[1] The name Tagmuḍant (from agmuḍan) is a direct translation from the French word oriental in the Berber Language.

It is situated in the northeastern part of the country, with a northern coastline on the Mediterranean Sea. The regions of Taza-Al Hoceima-Taounate, Fès-Boulemane and Meknès-Tafilalet lie to its west, with the Algerian provinces of Tlemcen and Naâma to its east and Béchar to the south. Melilla, a Spanish autonomous city, also borders the region. In 2015, Oriental was expanded to include Guercif Province

The region is made up into the following prefectures and provinces:[2] 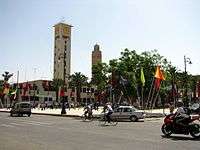 Main square of Oujda, the regional capital and largest city.