Oujda (Berber: ⵡⴻⵊⴷⴰ,Wejda ; Arabic: وجدة‎‎) is a city located in the northeastern Rif area of Morocco,with an estimated population of 450,000. It is located about 15 kilometres (9 miles) west of the Algerian border and about 55 km (34 miles) south of the Mediterranean Sea. It is the capital city of the Oriental administrative region of Morocco. 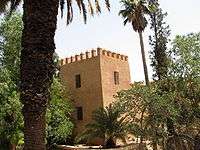 There is a difference of opinions on the origin of Oujda's name, a group of researchers suggest that its name is derived from the Arabic word for units (وجدات) in reference to the ambushes carried out by Bashi-bazouks. However, it is likely that the name is linked to the hunt for Sulaiman Al-Chamakh who assassinated King Idris the first by order of the Abbasid Caliphate. They had sent him to kill the King who had established an emirate, independent of the Abbasid Caliphate, in today's Morocco. He poisoned the King before fleeing to the east. He was, however, tracked by the Moors who found and killed him in an area not far from current day Oujda. Ever since this event (which occurred around the same time Oujda became the capital of eastern Morocco) the city has been called Oujda.[1][2]

There is some evidence of a settlement during the Roman occupation, which seems to have been under the control of Berbers rather than Romans.[3]

Uqba ibn Nafi began the Umayyad-Arab conquest of the region, during the reign of the Umayyad Caliphate, a conquest which was completed in AD 705 by Musa bin Nusayr. The city was founded in 994 by Ziri ibn Atiyya, Berber king of the Zenata tribes.[4] Further additions were made in 1048.

In the mid-11th century, Oujda acquired prominence through its strategic position on the road east from Sijilmasa. Throughout the history of the dynasties of the Muslim West, Oujda played an important strategic role among the Merinids, settled in Fes, in this case as a rear base in their conflict with the Abdalwadids of the Kingdom of Tlemcen.

The city was rebuilt in the 13th century by sultan Abu Yusuf Yaqub. The city experienced great difficulty in making peace with its neighbours to the east, and sometimes to the west, because of its position in respect to the clashes between the Saadi dynasty and Turks. It was torn between the rulers of Fes and the disputed Tlemcen, and from the 16th century, it was contested by the Alaouite dynasty of Morocco and the Turks in Algiers. In 1692, Sultan Ismail led in the Turks, who established their hegemony on Algeria. Oujda fell again under Turkish rule in the following century for few weeks.

The French occupied it in 1844 and again in 1859. To the west of the city is the site of the major Franco-Moroccan Battle of Isly in 1844. The French had to withdraw because of the strong Moroccan resistance. In 1907 and 1908 Oujda was reconquerred by general Bugeaud and marechal Lyautey and used as a French military base to control eastern Morocco. The modern city owes much of its present form to the French, it developed along the roads built at that time.

The 1948 Anti-Jewish Riots in Oujda and Jerada[5] occurred in this city. The crowd, sparked off by a minor incident, poured into the Jewish quarter. In the three hours that passed before the army could control the mob, five people (including one Frenchman) had been killed, thirty had been severely injured, shops and homes had been sacked.[6]

In 2010, Rod Solaimani famously visited Oujda and chronicled his trip for MTV.

The Moroccan border with Algeria is just east of Oujda; on the other side of the border is the Algerian town of Maghnia. The state of the border crossing depends on relations between the two countries, which are often strained. The border has been closed since 1994 due to a terrorist attack of an Algerian group.

Into the east of this forest is located Sidi Maafa park. 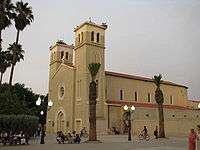 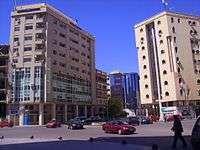 The main characteristic of the city is having the old city in the centre. The old city maintains traditional features of the Moroccan architecture with its narrow and twisted alleys which leads to the houses and different markets such as jewelry market and the leather market.

Gharnati refers to a variety of music originating in Andalusia. Its name is related, being derived from the Arabic name of the Spanish city of Granada.

Gharnati constitutes the musical mode most used in the Moroccan city of Oujda, where besides this musical kind is omnipresent and where one organizes each year in June the International Festival of the Gharnati music. Like Oran is Oujda the destination of raï.

The province is divided administratively into the following:[10]

Oujda is home to Mohammed the First University.

Oujda has a cement works.

A techno-pole is under construction near the airport.

The city is served by Angads Airport, which has connecting flights to Amsterdam, Brussels, Madrid, Marseille and Paris.

The city is the endpoint of the main railroad from Casablanca via Fes and Taourirt before the border with Algeria. There are several day and night trains to and from the city, linking it to the western part of the country.

Apart from this rail link and many bus/coach services, the city also has Angads Airport offering both national and international destinations.

Oujda has a strategic importance because of its location on the border. There are many economic and natural resources however, problems of overpopulation of the city and increase in unemployment rate up to 18% of the 11% on the national level. Migration to foreign countries was up to 28.3% of the national total.

Oujda relies heavily on trading because of its location between west of Algeria and east of Morocco. The economy of the city is directly related to the border's condition as it represents a passage for businesses directed towards Fes in the west, Talmasan in the east, Figuig in the south and Melilla in the north. As for the Industry in Oujda, the first mill was founded in 1928. The industry showed significant improvement during the seventies and eighties but was still humble compared to the industry of major Moroccan cities.

There are few touristic and historic locations such as Sidi Yahya's oasis. However, due to the lack of resources tourism does not contribute much to Oujda's economy. On March 18, 2003 king Muhammad the sixth has indicated to the importance of reviving the economy of the eastern area. In the context of this effort, Technopol Oujda was established. Other efforts such as road improvement, airport expansion and other project to improve the cities economy was founded.

The sports infrastructure in Oujda is composed of a municipal stadium, an Olympic venue, the Honneur Stadium of Oujda, built in 1976, the sports complex 'Rock' including a rugby stadium, a complex tennis in the park Lala Aicha, a golf course and two sports halls.

After teen years, the Mouloudya of Oujda came back to win in 1972 the Maghreb Cup, three years after MCO won The Botola Pro of Morocco.[12]

There is also the USMO, the second most popular Football club in Oujda.

Since 2009, the city has been twinned with Trowbridge in England due to the huge number[13] of diasporans, most of whom originate from villages close to Oujda. Trowbridge has the largest Moroccan community in the UK outside London.