The commune of Molenbeek has gained a reputation for being a safe haven for jihadists in relation to the support shown by some residents towards the bombers who carried out the Paris and Brussels attacks.[4][5][6][7]

The name Molenbeek comes from two Dutch words: molen, meaning "mill", and beek, meaning "brook". Although first applied to the brook that ran through the village, the name eventually came to be used to designate the village itself around the year 985. In the early Middle Ages, Molenbeek was known for its miraculous well of Saint Gertrude, which attracted thousands of pilgrims.

The village was made part of Brussels in the 13th century. As a result, Molenbeek lost a lot of its land to its more powerful neighbour. In addition, its main church was dismantled in 1578, leading to further decline. The town's character remained mostly rural until the 18th century.

At the end of the 18th century, the Industrial Revolution and the building of the Brussels-Charleroi Canal brought prosperity back to Molenbeek through commerce and manufacturing. In 1785, the town regained its status as an independent commune. Attracted by the industrial opportunities, many workers moved in, first from other Belgian provinces and France, then from South European, and more recently from East European and African countries. The growth of the community continued unabated throughout the 19th century, leading to cramped living conditions, especially near the canal.

The town became known as "Little Manchester"[8] and its inhabitants lived through an extended period of misery. At the end of the 19th century, Brussels reintegrated the canal area within its new port, which was thus lost to Molenbeek. The industrial decline, which had already started before World War I, accelerated after the Great Depression.

In some areas of the town, the ensuing poverty left its mark on the urban landscape and scarred the social life of the community, leading to rising crime rates and pervading cultural intolerance. Various local revitalisation programs are currently under way, aiming at relieving the most impoverished districts of the municipality.

Attempts at revitalizing the municipality have, however, not been successful. In June 2011, the multinational company BBDO, citing over 150 attacks on their staff by locals, posted an open letter to mayor Philippe Moureaux announcing its withdrawal from the town.[9] As a result, serious questions were raised about governance, security and the administration of Moureaux.[10]

Where Molenbeek was once a centre of intense industrial activity, concentrated around the canal and the railway, most of those industries have disappeared to make way for large-scale urban renewal following the modernist Athens Charter. The industrial past is remembered in a museum of social and industrial history built on the site of the foundry.

There are two distinct areas of Molenbeek: a lower area and a higher area. The lower area consists of working-class, mainly migrant, communities, mostly of Turkish and Moroccan descent, with many being second- and third-generation. The higher area features newer construction and is mostly residential.[14]

According to Le Monde, the assassins who killed anti-Taliban commander Ahmed Shah Massoud both came from Molenbeek.[15] Hassan el-Haski, one of the 2004 Madrid terror bombers came from Molenbeek.[16][17] The perpetrator of the Jewish Museum of Belgium shooting, Mehdi Nemmouche, lived in Molenbeek for a time.[18] Ayoub El Khazzani, the perpetrator of the 2015 Thalys train attack, stayed with his sister in Molenbeek.[19] French police believe the weapons used in the Porte de Vincennes siege the same day as the Charlie Hebdo shooting were sourced from Molenbeek.[20] The bombers of the November 2015 Paris attacks were also traced to Molenbeek;[21] during the Molenbeek capture of Salah Abdeslam, an accomplice of the Paris bombers, protesters "threw stones and bottles at police and press during the arrest", stated the Interior Minister of Belgium, Jan Jambon.[22]

At least three of the terrorists in the November 2015 Paris attacks — the brothers Brahim and Salah Abdeslam, alleged accomplice Mohamed Abrini, and the alleged mastermind Abdelhamid Abaaoud — are men who grew up and lived in Molenbeek. According to French President François Hollande, that was also where they organised the attacks.[23] On 18 March 2016, Salah Abdeslam, a suspected accomplice in those attacks, was captured in two anti-terrorist raids in Molenbeek that killed another suspect and injured two others. At least one other suspect remains at large.[24][25][26][27] Ibrahim (born 9 October 1986 in Brussels) was involved in the attempted robbery of a currency exchange office in January 2010, where he shot at police with a Kalashnikov rifle. The Mayor of Brussels, Freddy Thielemans, and the Mayor of Molenbeek, Philippe Moureaux, described the shooting as a "fait divers" (a small daily news item) and "normal in a large city", causing controversy.[28]

As of 2016 there is one main minority group in Molenbeek, Belgian Moroccans. That year Françoise Schepmans, Mayor of Molenbeek, stated that the lack of diversity in the foreign population of Molenbeek and the fact they are all clustered in the same area is a problem.[29]

As of 2016 40% of young people in Molenbeek are unemployed. The commune is in an area of Brussels called the "poor croissant".[29]

The municipality is governed by an elected municipal council and an executive college of the mayor and aldermen. The longtime mayor from 1992 to 2012 was Philippe Moureaux (PS). Following the Belgian local elections, 2012, an alternative majority was formed headed by mayor Françoise Schepmans (MR) and consisting of MR (15 seats), CDH-CD&V (6 seats) and Ecolo-Groen (4 seats). The Socialist Party (16 seats) became the opposition next to the Workers' Party of Belgium (PTB), Democratic Federalist Independent (DéFI), the ISLAM party and the New Flemish Alliance (N-VA), each having one seat.

The Molenbeek football team, FC Brussels, used to play in the Belgian first division. They folded at the end of 2012/13 as members of the Belgian second division.

There are 17 French-language and six Dutch-language primary schools.[30] 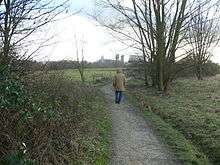