For other uses, see Outback (disambiguation). 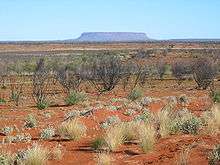 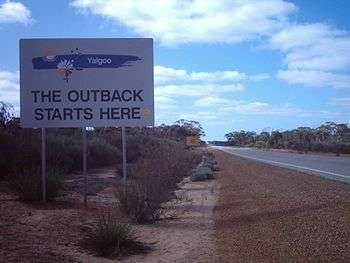 The Dingo Fence near Coober Pedy 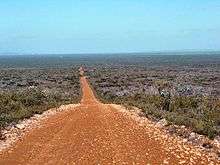 The Outback is the vast, remote, arid interior of Australia. The term "the outback" is generally used to refer to locations that are comparatively more remote than those areas named "the bush" which, colloquially, can refer to any lands outside the main urban areas.

Early European exploration of inland Australia was sporadic. More focus was on the more accessible and fertile coastal areas. The first party to successfully cross the Blue Mountains just outside Sydney was led by Gregory Blaxland in 1813, 25 years after the colony was established. People starting with John Oxley in 1817, 1818 and 1821, followed by Charles Sturt in 1829–1830 attempted to follow the westward-flowing rivers to find an "inland sea", but these were found to all flow into the Murray River and Darling River which turn south. Over the period 1858 to 1861, John McDouall Stuart led six expeditions north from Adelaide into the outback, culminating in successfully reaching the north coast of Australia and returning, without the loss of any of the party's members' lives. This contrasts with the ill-fated Burke and Wills expedition in 1860–61 which was much better funded, but resulted in the deaths of three of the members of the transcontinental party.

The Overland Telegraph line was constructed in the 1870s [1] along the route identified by Stuart.

Exploration of the outback continued in the 1950s when Len Beadell explored, surveyed and built many roads in support of the nuclear weapons tests at Emu Field and Maralinga and rocket testing on the Woomera Prohibited Area. Mineral exploration continues as new mineral deposits are identified and developed.

While the early explorers used horses to cross the outback, the first woman to make the journey riding a horse was Anna Hingley, who rode from Broome to Cairns in 2006.[2]

Other than agriculture and tourism, the main economic activity in this vast and sparsely settled area is mining. Owing to the complete absence of mountain building and glaciation since the Permian (in many areas since the Cambrian) ages, the outback is extremely rich in iron, aluminium, manganese and uranium ores, and also contains major deposits of gold, nickel, iron, lead and zinc ores. Because of its size, the value of grazing and mining is considerable. Major mines and mining areas in the outback include opals at Coober Pedy, Lightning Ridge and White Cliffs, metals at Broken Hill, Tennant Creek, Olympic Dam and the remote Challenger Mine. Oil and gas are extracted in the Cooper Basin around Moomba.

In Western Australia the Argyle diamond mine in the Kimberley is the world's biggest producer of natural diamonds and contributes approximately one-third of the world's natural supply. The Pilbara region's economy is dominated by mining and petroleum industries.[3] Most of Australia's iron ore is also mined in the Pilbara and it also has one of the world's major manganese mines.

A view of dunefields and mesa, Central Australia

Aboriginal communities in outback regions, such as the Anangu Pitjantjatjara Yankunytjatjara lands in northern South Australia, have not been displaced as they have been in areas of intensive agriculture and large cities, in coastal areas. 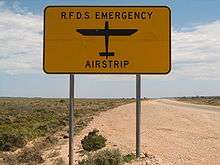 A sign on the Eyre Highway indicating that an RFDS emergency airstrip is ahead.
Main article: Royal Flying Doctor Service of Australia

The Royal Flying Doctor Service (RFDS) started service in 1928 and helps people who live in the outback of Australia. In former times, serious injuries or illnesses often meant death due to the lack of proper medical facilities and trained personnel.

Main article: School of the Air

In most outback communities, the number of children is too small for a conventional school to operate. Children are educated at home by the School of the Air. Originally the teachers communicated with the children via radio, but now satellite telecommunication is used instead. Some children attend boarding school, mostly only those in secondary school.

The concept of 'back' country, which initially meant land beyond the settled regions, was in existence in 1800. Crossing of the Blue Mountains and other exploration of the inland however gave a different dimension to the perception. The term "outback" was first used in print in 1869, when the writer clearly meant west of Wagga Wagga, New South Wales.[5]

It is colloquially said that 'the outback' is located "beyond the Black Stump". The location of the black stump may be some hypothetical location or may vary depending on local custom and folklore. It has been suggested that the term comes from the Black Stump Wine Saloon that once stood about 10 kilometres out of Coolah, New South Wales on the Gunnedah Road. It is claimed that the saloon, named after the nearby Black Stump Run and Black Stump Creek, was an important staging post for traffic to north-west New South Wales and it became a marker by which people gauged their journeys.[6] 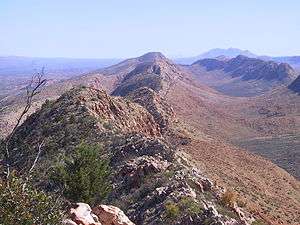 The MacDonnell Ranges in the Northern Territory are found in the centre of the country.

"The Never-Never" is a term referring to remoter parts of the Australian outback. The outback can be also referred to as "back of beyond", "back o' Bourke" although these terms are more frequently used when referring to something a long way from anywhere, or a long way away. The well-watered north of the continent is often called the "Top End" and the arid interior "The Red Centre", owing to its vast amounts of red soil and sparse greenery amongst its landscape.

A brumby in the Outback

The Australian Outback is full of very important well-adapted wildlife, although much of it may not be immediately visible to the casual observer. Many animals, such as red kangaroos and dingoes, hide in bushes to rest and keep cool during the heat of the day.

Birdlife is prolific, most often seen at waterholes at dawn and dusk. Huge flocks of budgerigars, cockatoos, corellas and galahs are often sighted. On bare ground or roads during the winter, various species of snakes and lizards bask in the sun, but they are rarely seen during the summer months.

Feral animals such as camels thrive in central Australia, brought to Australia by the early Afghan drivers. Feral horses known as 'brumbies' are station horses that have run wild. Feral pigs, foxes, cats and rabbits are also imported animals that degrade the environment, so time and money is spent eradicating them in an attempt to help protect fragile rangelands. 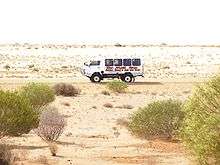 The Coober Pedy Oodnadatta One Day Mail Run OKA bus in the outback. The bus serves as a tour bus and mail carrier.

Gosses Bluff crater, one of a number of meteor impact craters that can be found across outback Australia.

There are many popular tourist attractions in the outback. Some of the well known destinations include:

Visitors to the outback often drive their own or rented vehicles, or take organised tours. Travel through remote areas on main roads is easily done and requires no planning. However travel through very remote areas, on isolated tracks, requires planning and a suitable, reliable vehicle (usually a four-wheel drive). On very remote routes considerable supplies and equipment may be required, this can include prearranged caches. It is not advisable to travel into these especially remote areas with a single vehicle, unless fully equipped with good communication technology (e.g. a satellite phone, EPIRB etc.). Many visitors prefer to travel in these areas in a convoy. Deaths from tourists and locals becoming stranded on outback trips occasionally occur, sometimes because insufficient water and food supplies were taken, or because people have walked away from their vehicle in search of help. Travellers through very remote areas should always inform a reliable person of their route and expected destination arrival time, and remember that a vehicle is much easier to locate in an aerial search, than a person, so in the event of a breakdown, they must not leave their vehicle. The outback is home to a diverse set of animal species, such as the kangaroo, emu and dingo. The Dingo Fence was built to restrict dingo movements into agricultural areas towards the south east of the continent. The marginally fertile parts are primarily utilised as rangelands and have been traditionally used for sheep or cattle grazing, on cattle stations which are leased from the Federal Government. While small areas of the outback consist of clay soils the majority has exceedingly infertile palaeosols. Riversleigh, in Queensland, is one of Australia's most renowned fossil sites and was recorded as a World Heritage site in 1994. The 100 km2 (39 sq mi) area contains fossil remains of ancient mammals, birds and reptiles of Oligocene and Miocene age. 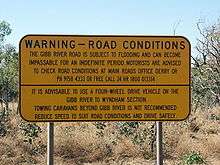 A road sign warning of potentially dangerous conditions ahead.

The outback is criss-crossed by historic tracks. Most of the major highways have an excellent bitumen surface and other major roads are usually well-maintained dirt roads. Tracks in very sandy or exceedingly rocky areas may require high-clearance four wheel drives and spare fuel, tires, food and water before attempting to travel them, however most outback roads are easily traversed in ordinary vehicles, provided care is taken. Drivers unused to dirt roads should be especially cautious – it is recommended that drivers reduce their speed, drive with extra care, and avoid driving at night because animals can stray on to roads. Travelling in remote areas in northern Australia is not advisable during the wet season (November to April), as heavy tropical downpours can quickly make dirt roads impassable. In the remotest parts of Australia fuel sellers are located hundreds of kilometres apart, so spare fuel must be carried or refuelling spots calculated carefully in order not to run out of fuel in between towns. In addition, multiple trailer trucks (known as Road Trains) traverse these roads and extreme care must be taken when around these vehicles, due to their weight, length (often three full trailers long) and amount of dust thrown up by 46+ tyres.

The Stuart Highway runs from north to south through the centre of the continent, roughly paralleled by the Adelaide–Darwin railway. There is a proposal to develop some of the roads running from the SW to the NE to create an all-weather road named the Outback Highway, crossing the continent diagonally from Laverton, Western Australia (north of Kalgoorlie, through the Northern Territory to Winton, in Queensland.

Air transport is relied on for mail delivery in some areas, owing to sparse settlement and wet-season road closures. Most outback mines have an airstrip and many have a fly-in fly-out workforce. Most outback sheep stations and cattle stations have an airstrip and quite a few have their own light plane. Medical and ambulance services are provided by the Royal Flying Doctor Service. The School of the Air is a radio-based school using the RFDS radios.