Paarl (/ˈpɑːrl/; Afrikaans: [ˈpɑːrəl]; derived from Parel, meaning Pearl in Dutch[2]) is a city with 191,013 inhabitants in the Western Cape province of South Africa. It is the third oldest town and European settlement in the Republic of South Africa (after Cape Town and Stellenbosch) and the largest town in the Cape Winelands. Due to the growth of the Mbekweni township, it is now a de facto urban unit with Wellington. It is situated about 60 kilometres (37 mi) northeast of Cape Town in the Western Cape Province and is renowned for its haunting scenic beauty and deep viticulture and fruit growing heritage.

Paarl is the seat of the Drakenstein Local Municipality; although not part of the Cape Town metropolitan area, it falls within its economic catchment. Paarl is unusual in South Africa in that the name of the place is pronounced differently in English and Afrikaans. An unusual feature of the name of the town is that Afrikaners customarily attach the definite article to it: people say in die Paarl ("in the Paarl"), rather than in Paarl.

Paarl gained international attention when, on 11 February 1990, Nelson Mandela walked out of Victor Verster Correctional Centre (now known as Drakenstein Correctional Centre) in Paarl ending 27 years of imprisonment and beginning the march to South Africa's post-apartheid era and multi-racial elections.[3] Mandela spent three years in prison here living in a private house within the walls. Today, a bronze statue of Mandela stands outside the prison, where he still resides to this day.

Paarl hosted a match from the ICC Cricket World Cup 2003. The headquarters of Ceres Fruit Juices are located in the city, although its namesake, Ceres valley and source of much of the fruit, is around one hour's drive to the northeast.

The district is particularly well known for its Pearl Mountain or "Paarl Rock". This huge granite rock is formed by three rounded outcrops that make up Paarl Mountain and has been compared in majesty to Uluru (formerly known as Ayers Rock) in Australia. (However, they are not geologically similar. Paarl Rock consists of intrusive igneous rock, while Uluru is a sedimentary remnant).

The area that is now known as Paarl was first inhabited by the Khoikhoi and San people. The Peninsular Khoikhoi people and the Cochoqua people lived in this area divided by the Berg River Valley. The Cochaqua were cattle herding people and among the richest of the Khoi tribes. They had between 16,000-18,000 members and originally called Paarl Mountain, Tortoise Mountain.[4]

The Dutch East India Company under the leadership of Jan van Riebeeck established meat trading relationships with the Khoikhoi people on the Table Bay coastline. In 1657, in search of new trading relationships inland, Abraham Gabemma saw a giant granite rock glistening in the sun after a rainstorm and named it "de Diamondt en de Peerlberg" (Diamond and Pearl Mountain) from which Paarl is derived.[2][5] Gabemma (often also spelled Gabbema) was the Fiscal (public treasurer) for the settlement on the shores of Table Bay. The "diamonds" disappeared from the name and it became known simply as Pearl Rock or Pearl Mountain.

In 1687, Governor Simon van der Stel gave title to the first colonial farms in the area to "free burghers". The following year, the French Huguenots arrived in the Western Cape and began to settle on farms in the area.[4] The fertile soil and the Mediterranean-like climate of this region provided perfect conditions for farming. The settlers planted orchards, vegetable gardens and above all, vineyards.[6] Thus began Paarl's long and continuing history as a major wine and fruit producing area of South Africa.

The arrival of the European settlers brought on conflict with the Khoikhoi people, as land and water resources began to be contested and the Khoi traditions of communal land use came in conflict with the settler's concept of private property. The Khoi peoples were defeated in local war and were further decimated by European diseases. The population scattered inland toward the Orange River or became laborers on settler farms.[4] 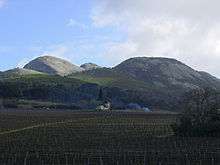 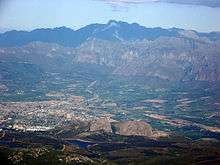 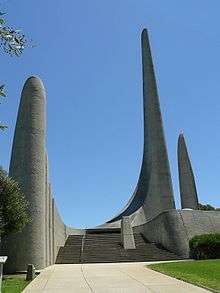 Like many towns in the Cape Winelands, Paarl is home to a prosperous community, with many well maintained and attractive Cape Dutch houses, beautiful gardens and streets lined with old oak trees.

Paarl boasts a unique cultural attraction: it was here that the foundations of the Afrikaans language were laid by the Genootskap van Regte Afrikaners. The "Afrikaanse Taalmonument" (monument to the Afrikaans language) on the slopes of Paarl Mountain, the Language Museum (Taalmuseum) and the Afrikaans Language Route through Dal Josaphat are memorials to this achievement.

The former headquarters of the wine industry in South Africa is also situated here.: This was the famous "Co-operative Wine Growers' Association" (better known by its Afrikaans initials KWV). KWV became a South African institution that has acquired an international reputation based on its unique achievements and its imprint of quality on the local wine industry. Over the past decade, however, KWV has been privatized and no longer has an administrative role in the South African wine industry. (KWV's main wine production and maturation facilities are on its Paarl premises, while its brandy production takes place in Worcester and grape juice concentrate production in Upington in the Northern Cape.)

The town and its surroundings attract many visitors with an array of activities and interests. There are magnificent Cape Dutch buildings (17-19th Century), scenic drives, hiking trails, excellent restaurants and the Paarl wine route, with its many wine tasting opportunities.[8]

The old Spice Route Paarl, which was initiated in 1997 by Charles Back, the owner of this estate as well as of Fairview, provides an opportunity for visitors to appreciate and taste local delicacies from the Western Cape, like biltong, draft beer or red and white wines from the surrounding wine yards in Malmesbury and Darling. Back's vision was "to offer local and international tourists a selection of hand-picked artisanal producers who put as much thought, skill and passion into their products as Spice Route wine maker, Charl du Plessis, puts into his wines".[9] Besides that a range of art galeries and the traditional way of organic dark chocolate production can be explored. The heritage of the Spice Route farm goes back to the historical marieners who used to trade Eastern spices to Europe along the "Spice Route" for spice trade in the 15th century.[10]

Paarl from the summit of Paarl Mountain, looking across to the Klein-Drakenstein and Du Toitskloof Mountains

The Paarl Rock itself is these days a popular Mecca for rock climbers. However, in the pioneering period of rock climbing in South Africa, the mountain was ignored or shunned because its steep faces were so smooth and unfissured that climbers could find no place to attach "runners" or anchor points for belays. The first climbing routes up the rock were pioneered in 1969 by J.W.Marchant and G. Athiros, the former from the University of Cape Town Mountain and Ski Club. Soon afterwards Marchant and John Knight established a few routes on which the rope was run out for 100 m (330 ft) or more with no protection whatsoever.[11] This was in the days before bolting was possible and these achievements are still held in high regard today. Nowadays protection is afforded by bolts in the granite and there are on Paarl Rock a few dozen spectacular, beautiful and very hard routes that attract the best climbers of the current generation. (All of these climbs remain dangerous for the inexperienced.) A guide book for these routes was written in 2006 by Stewart & Scott Noy who lived at the foot of the mountain and were developing many of the new routes at the time.

Amongst the neighborhoods include De Zoete Inval (middle class suburb in the south); Courtrai (a wealthy suburb in the southern part of town); Central Paarl (generally known as Upper-Paarl and also containing a lot of wealthy suburbs, popular area for local Jews); Lemoenkloof (a wealthy suburb between the central and northern parts of town); Northern Paarl (middle class suburb, including the area of Groenvlei); Denneburg (in the south east of the town); Vrykyk (in the south) and areas in the eastern part of the town such as New Orleans, New York, Amstelhof, Lantana and Klein Nederburg.

There are also large gated communities developed towards the South of the town on the way to Franschhoek, such as Boschenmeer (golf estate), Val de Vie (polo estate) and Pearl Valley (golf estate).

Municipality (1) — On 18 July 1905, the municipal council accepted a coat of arms presented by Adriaan Moorrees.[13] It was the arms of Hendrik van Reede van Drakenstein : a silver shield charged with two dancetty black bars and crowned with a golden coronet. The supporters were two golden gryphons. The motto was Pour le salut du peuple ("For the wellbeing of the people"). Sometimes, the arms were depicted as silver dancetty bars on a blue shield.

Municipality (2) — The arms were re-designed in 1950 by Colin Graham Botha, and granted by the College of Arms on 22 January 1951. They were published in the Cape Province's Official Gazette in 1955, re-granted by the provincial administrator in 1967, and certified by the Bureau of Heraldry in 1969.[14]

In the new version, each of the dancetty bars on the shield displayed two pearls; the supporters were red with blue wings dotted with golden fleurs de lis; and the crest was a red demi-gryphon with blue wings holding a bunch of grapes.

Divisional Council — The divisional council was the local authority which administered the rural areas outside the town. It registered a coat of arms at the Bureau of Heraldry on 20 October 1978. Once again, the Van Reede shield formed the basis of the design. Down the middle of the shield was a red pale displaying a bunch of grapes between two pearls. The crest was a fleur de lis. The motto was Animus et fata ("Courage and fortune").[14]

Mbekweni — The local authority for the Black township of Mbekweni registered arms at the Bureau on 5 May 1989. The shield is divided per chevron into red and green, with a golden chevron rompu across the centre and a silver cross pommy below it. Above the arms was a green mural crown decorated with a band of red edged in gold. The motto was uXolo neMpulelelo.[14]