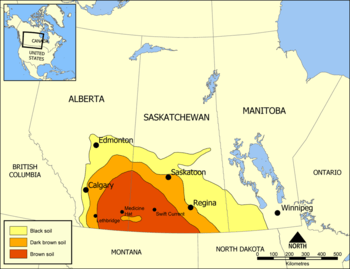 Palliser's Triangle, or the Palliser Triangle, is a largely semi-arid steppe region in the Prairie Provinces of Western Canada that was determined to be unsuitable for agriculture because of its unfavourable climate. The soil in this area is dark brown or black in colour and is very nutrient-rich. The semi-arid conditions, however, initially made this area difficult to farm.

The area was named after John Palliser, the leader of the 1857–1859 survey expedition to Canada's west, who first remarked on this area.[1] Palliser discovered it was a dry land with no trees; thus, he thought it would be unsuitable for growing crops. A few years later John Macoun, a government official, argued that it would be good for growing wheat and advertised it as such to immigrant farmers. The triangle began to be settled and farmed at the start of the 20th century.

For many years this area was very attractive to ranching. The sandy soil, grassy land cover, and dry weather supported cattle grazing, and although precipitation was light, the wettest time of the year was late spring and early summer (when plants most need the moisture). Many U.S. ranchers would bring herds north to graze in the triangle. By 1912, however, much of the land was overgrazed.

For a time yields were high, but a combination of the dry conditions and poor agricultural practices turned the area into a Dust Bowl in the 1930s, helping plunge Canada into the Great Depression. Modern farming techniques and a series of rainy years helped to reestablish the area as an important farming region; however, farming has always been precarious. The north edge of the triangle contains black soil; Farms around Edmonton and Saskatoon are especially notable as good crop land.[2]