Panruti is a town, municipality and taluk headquarters of Cuddalore district, Tamil Nadu, India. Panruti is located between Cuddalore and Viluppuram. Panruti is famous for jackfruit and cashews. The jackfruit grown here is exported worldwide and is very sweet. It is a business center of Cuddalore district. It has been a great commercial area for more than a 200 years. The name Panruti came from pan meaning song and ruti meaning music in Tamil, as the place is where many saints and great religious singers such as nayanmars and vainavas sung. A 150-year-old government school was built here by the British East India Company and a more-than-1000-year-old temple Veeratteswarar temple is nearby in Thiruvathigai. As of 2011, the town had a population of 60,323.

Due to the high revenue of agricultural income from crops such as jackfruit, cashews, and bettlenut this municipality was upgraded as 2nd Grade Municipality as per G.O Order No 533 Dated 22 March 1975 by the Tamil Nadu Govt. As per Water Supply Department this municipality was upgraded as 1st Grade Municipality as per G.O. Order No 715 Dated 6.10.89 Total Area of this Municipality is 18.03 km2. From 1969 onwards the Municipal Election are being conducted as per Tamil Nadu Government Rules. As per Municipal Administration and Water Supply Department Order No 133 Dated 6 June 1996 the strength of municipal councilors was increased from 24 to 33 due to the population increases as per the census in 1971.[2]

The name Panruti evolved from pannargal (a word for people who created music in ancient times). The creators of various panns were also titled as pannar. 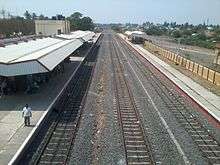 Panruti produces cashews, jackfruit, sugar cane and many vegetables. Panruti plays a major role in the cashew export business, exporting to Malaysia, Australia, Singapore, and the United States. It is known for its famous international jackfruit market, from where jackfruit is exported to many other countries. It is also a commercial center of Cuddalore district. The Rathinampillai market located in the center of the city attracts thousands of people everyday from morning 5:00 a.m. itself. Near by villages Anguchetty palayam, Chinnapettai, Thiruthuraiyur, Puthupettai or Pudupet, Bandrakottai, Mandhipalayam,and number of villages weaving the Lungi, Silk sarees.[4]

A five-foot-tall Gandhi statue at Gandhi park near the Four-Road junction at Panruti was found in the month of September 2016, Dust had accumulated on the layers of paintwork, haphazardly done in bursts of administrative energy. When the civic body officials swung into action to give the park a much-needed facelift, little did they know that amid the thick outgrowth of weeds was hidden a treasure trove. The statue that braved the elements for over six decades was found to be made of Panchaloha - an amalgamation of five precious metals and alloys - worth several crores of rupees, with gold comprising around 25 per cent of the statue’s 200-odd kg weight i.e. 40 kg of gold in it. [24]

during her later years and devoted her lifetime service to the Lord Siva. Also notable saints Thirunavukkarasar, and Arunagirinathar visited and wrote many hymns on the Lord. Afflicted by a painful illness, Thirunavukkarasar prayed for relief at this temple where his sister Thilagavathiyar served and was cured. This temple is the place where Lord shiva destroyed three rakshashas (demons) and the three cities created by them. This temple is one among the 8 veera Siva temples in Tamil Nadu.