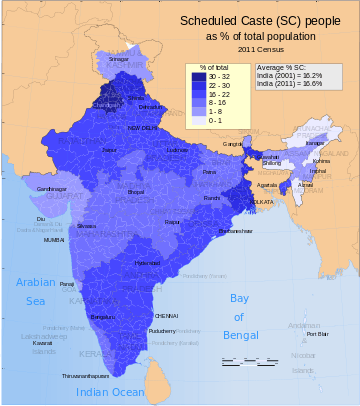 Scheduled castes distribution map in India by state and union territory according to 2011 Census.[1] Punjab had the highest % of its population as SC (~32%), while India's island territories and two northeastern states had 0%.[1] 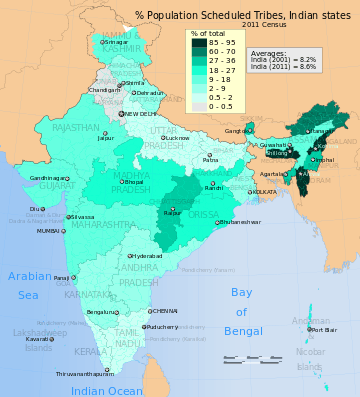 Scheduled Tribes distribution map in India by state and union territory according to 2011 Census.[1] Mizoram and Lakshadweep had the highest % of its population as ST (~95%), while Punjab and Haryana had 0%.[1]

The Scheduled Castes[2] (SCs) and Scheduled Tribes (STs) are various officially designated groups of historically disadvantaged indigenous people in India. The terms are recognised in the Constitution of India and the various groups are designated in one or other of the categories. During the period of British rule in the Indian subcontinent, they were known as the Depressed Classes. The percentage of people in scheduled castes is essentially the percentage of people in the lower part of Indian society.

In modern literature, the Scheduled Castes are sometimes referred to as adi dravida or Dalits.[3] Scheduled Tribes is used as an official term for Adivasis.[4]

The Scheduled Castes and Scheduled Tribes comprise about 16.6 percent and 8.6 percent, respectively, of India's population (according to the 2011 census).[5][6] The Constitution (Scheduled Castes) Order, 1950 lists 1,108 castes across 29 states in its First Schedule,[7] and the Constitution (Scheduled Tribes) Order, 1950 lists 744 tribes across 22 states in its First Schedule.[8]

Since independence, the Scheduled Castes and Scheduled Tribes were given Reservation status, guaranteeing political representation. The Constitution lays down the general principles of affirmative action for SCs and STs.

Since the 1850s these communities were loosely referred to as Depressed Classes, with the Scheduled Tribes also being known as Adivasi ("original inhabitants"). The early 20th century saw a flurry of activity in the Raj assessing the feasibility of responsible self-government for India. The Morley–Minto Reforms Report, Montagu–Chelmsford Reforms Report and the Simon Commission were several initiatives in this context. A highly contested issue in the proposed reforms was the reservation of seats for representation of the Depressed Classes in provincial and central legislatures.

In 1935, Parliament passed the Government of India Act 1935, designed to give Indian provinces greater self-rule and set up a national federal structure. The reservation of seats for the Depressed Classes was incorporated into the act, which came into force in 1937. The Act introduced the term "Scheduled Castes", defining the group as "such castes, races or tribes or parts of groups within castes, races or tribes, which appear to His Majesty in Council to correspond to the classes of persons formerly known as the 'Depressed Classes', as His Majesty in Council may prefer".[9] This discretionary definition was clarified in The Government of India (Scheduled Castes) Order, 1936, which contained a list (or Schedule) of castes throughout the British-administered provinces.

After independence the Constituent Assembly continued the prevailing definition of Scheduled Castes and Tribes, giving (via articles 341 and 342) the president of India and governors of the states a mandate to compile a full listing of castes and tribes (with the power to edit it later, as required). The complete list of castes and tribes was made via two orders: The Constitution (Scheduled Castes) Order, 1950[10] and The Constitution (Scheduled Tribes) Order, 1950,[11] respectively.

According to the Constitution (Scheduled Castes) Orders (Amendment) Act, 1990, Scheduled Castes can only belong to Hindu or Sikh or Buddhist religions.[12][13] There is no religion bar in case of Scheduled Tribes.[14][15] The Sachar Committee report of 2006 revealed that scheduled castes and tribes of India are not limited to the religion of Hinduism. The 61st round Survey of the NSSO found that 90% of the Buddhists, one-third of the Sikhs, and one-third of the Christians in India belonged to the notified scheduled castes or tribes of the Constitution.[16][17]

The Constitution provides a three-pronged strategy[18] to improve the situation of SCs and STs:

There was an initiative to replace the Commissioner with a committee in the 48th Amendment to the Constitution, changing Article 338. While the amendment was being debated, the Ministry of Welfare established the first committee for SCs and STs (with the functions of the Commissioner) in August 1978. These functions were modified in September 1987 to include advising the government on broad policy issues and the development levels of SCs and STs. Now it is included in Article 342.

The Scheduled Castes Sub-Plan (SCSP) of 1979 mandated a planning process for the social, economic and educational development of Scheduled Castes and improvement in their working and living conditions. It was an umbrella strategy, ensuring the flow of targeted financial and physical benefits from the general sector of development to the Scheduled Castes.[23] It entailed a targeted flow of funds and associated benefits from the annual plan of states and Union Territories (UTs) in at least a proportion to the national SC population. Twenty-seven states and UTs with sizable SC populations are implementing the plan. Although the Scheduled Castes population according to the 2001 Census was 16.66 crores (16.23 percent of the total population), the allocations made through SCSP have been lower than the proportional population.. A strange factor has emerged of extremely lowered fertility of scheduled castes in Kerala, due to land reform, migrating Kerala Gulf diaspora and democratization of education.[24]