pronunciation )(also spelled as Villupuram and Vizhupuram)[2] is a municipality and the administrative headquarters of Viluppuram district, the largest district in the state of Tamil Nadu, India. It is well connected by both road and rail to all the important cities in Tamil Nadu. The town serves as a major railway junction, and National Highway 45 passes through it. With agriculture as its main source of income, As of Government Of India 2014 Data Viluppuram had a population of 121,198 and the town's literacy rate has been recorded as 90.16% by Census 2011.[3]

In 1919, Viluppuram was officially constituted as a municipality, which today comprises 36 wards, making it the largest city and municipality in Viluppuram district.

The Chola were the early rulers. Among these rulers, Karikala Chola was the most famous and powerful.

For a short period, the Cholas were overthrown by Simhavishnu Pallava and the Region came under the Pallava rule for sometime. Vijayalaya Chola again revived Chola rule. This was the beginning of great Chola Empire. The later Chola rulers were weak and the power passed on to the hands of Eastern Chalukyas.

Cholas regained their lost position but with the rise of Jatavarman Sundara Pandya-1 (1251 A.D), Chola supremacy came to an end. The sway of Pandyas lasted for over 50 years, followed by Muslim domination from 1334 to 1378 A.D. By 1378, the region came under the rule of Vijayanagara Empire and Nayaks were appointed as the rulers of the region.

In 1677 Shivaji took Gingee area with the assistance of Golkonda forces. Then came the Mughals. During the Mughals regime, both the English and French acquired settlements in South Arcot. During the Anglo-French rivalry, the entire district was turned into a war land. After sometime, the entire area came under the control of East India Company. It remained under British authority till 1947 when India became independent.[6]

The area contains metamorphic rocks formed by pressure and heat belonging to the granite-like gneiss family. There are also three major groups of sedimentary rocks, layers of particles that settled in different geological periods.[9] Kalrayan Hills [10] forest park is located 116 kilometres (72 mi) to the west and Gingee Hills forest park 50 kilometres (31 mi) to the north. The Thatagiri Murugan Temple is about 191 kilometres (119 mi) to the southeast in Senthamangalam [11] with the Lord Siva temple in Koppampatti 153 kilometres (95 mi) southwest of the town.[8]

As of the 2011 census, Viluppuram municipality was divided into 36 wards for which elections are held every five years and had a population of 96,253 of which 47,670 were male and 48,583 female. Population of children aged 0–6 was 10,217, which was 10.61% of the total population. The female sex ratio was 1,019 against a state average of 996. The child sex ratio was around 990 compared to the Tamil Nadu state average of 943. The literacy rate of Viluppuram city was 90.16%, higher than state average of 80.09%. In Viluppuram, male literacy was around 94.93% while female literacy rate was 85.50%. Viluppuram Municipality had total administration over 22,832 houses to which it supplies basic amenities like water and sewerage. It is also authorized to build roads within Municipality limits and impose taxes on properties coming under its jurisdiction. Scheduled Castes (SC) constituted 12.53% of the people while Scheduled Tribes (ST) were 0.29%.

Politically, Viluppuram is part of the Villuppuram Lok Sabha constituency and the Viluppuram State Assembly constituency. The municipality was established in 1919 and was upgraded to a second grade municipality in 1953, a first grade municipality in 1973, and a selection grade municipality in 1988. It has a population of 96,256 (2011 census) and an area of 8.36 square kilometres (3.23 sq mi). The town is divided into 44 wards. The municipal council is composed of 44 ward councillors and is headed by a chairperson elected by voters of the town. Councillors elect a vice-chairperson among themselves while the executive wing is headed by a commissioner, who is assisted by a team of officials including the health officer, municipal engineer, town planning officer, manager, revenue officer and other staff. 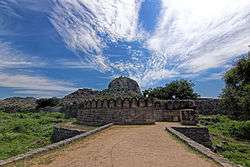 Gingee Fort as seen from the entrance. 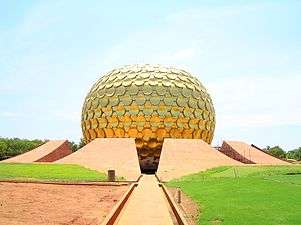 The Matrimandir, a golden metallic sphere in the center of Auroville.

Viluppuram is well connected by roads to major cities and to the rest of the state. Villupuram has the longest National roads of any district in Tamil Nadu. The major national highways of the town are:

Besides the above-mentioned national highways, several state highways also run through the district and town. 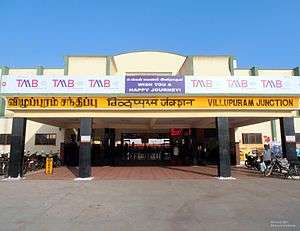 Viluppuram has a well-known railway station.It was first built under the British .The Viluppuram Railway Junction at Viluppuram serves as the distribution point of rail traffic from Chennai, the state capital of Tamil Nadu, towards the southern part of the state. It is one of the important junctions in Southern Railway.[28][29] Five railway lines branch out of Viluppuram:

Viluppuram railway station has been undergone a massive infrastructure upgrade to handle this traffic.

Viluppuram, in the past, was a well-known Railway junction making the town easily accessible from different parts of the state. The Railway station was built by the British, and this meant that the British were keen on building a school to provide English education in the town. The Railway School was amongst the first schools to be built in Viluppuram, and the school was largely staffed by Anglo-Indian teachers, who were able to teach students to speak and write in Engish. In the 1930's an English medium Anglo-Indian school called Sacred Heart Convent Higher Secondary School was opened by the Carmelite Sisters of Saint Teresa. This school became one of the most sought after schools for English education in the state. The school is known to provide students with an all-round development and education, inspired by Christian values. Other notable schools are the Government Girls High School, Government Boys High School, MRIC School, Ramakrishna Matriculation School, John Dewey School and E S Matriculation School.

Since the town is landlocked, the weather in Viluppuram is generally humid and hot. It relies on the monsoon for rain during October, November and December. Summers are very hot, and temperatures can get up to 40 °C (104 °F). Winters are moderate with temperatures ranging between 30 and 35 °C (86 and 95 °F) Viluppuram has a tropical climate. In winter, there is much less rainfall in Viluppuram than in summer. This climate is considered to be Aw according to the Köppen-Geiger climate classification.

The difference in precipitation between the driest month and the wettest month is 216 millimetres (8.5 in). During the year, the average temperatures vary by 7.4 °C (45.3 °F).