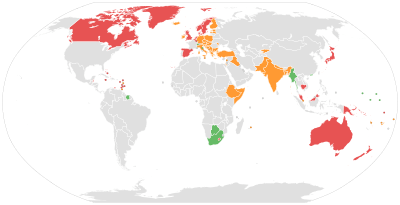 For the first case mentioned above, in particular, the form of executive-branch arrangement is distinct from most other parliamentary and semi-presidential republics that separate the head of state (usually designated as the "president") from the head of government (usually designated as "prime minister", "premier" or "chancellor") and subject the latter to the confidence of parliament and a flexible tenure in office while the head of state lacks either dependency, and investing either office with the majority of executive power.

Mary McAleese, President of Ireland (1997–2011) and Aleksander Kwaśniewski, President of Poland (1995–2005). Both were heads of state of parliamentary republics.

However, in a parliamentary republic with a head of state whose tenure is dependent on parliament, the head of government and head of state may form one office (as in Botswana, the Marshall Islands, Nauru, South Africa and Suriname), but the president is still selected in much the same way as the prime minister is in most Westminster systems. This usually means that they are the leader of the largest party or coalition of parties in parliament.

In some instances, the president may legally have executive powers granted to them to undertake the day-to-day running of government (as in Austria) but by convention they either do not use these powers or they use them only to give effect to the advice of the parliament or head of government. Some parliamentary republics could therefore be seen as following the semi-presidential system but operating under a parliamentary system.

Typically, parliamentary republics are states that were previously constitutional monarchies with a parliamentary system, with the position of head of state hitherto a monarch.[1]

Following the defeat of Napoleon III in the Franco-Prussian War, France once again became a republic – the French Third Republic – in 1870. The President of the Third Republic had significantly less executive powers than those of the previous two republics had. The Third Republic lasted until the invasion of France by Nazi Germany in 1940. Following the end of the war, the French Fourth Republic was constituted along similar lines in 1946. The Fourth Republic saw an era of great economic growth in France and the rebuilding of the nation's social institutions and industry after the war, and played an important part in the development of the process of European integration, which changed the continent permanently. Some attempts were made to strengthen the executive branch of government to prevent the unstable situation that had existed before the war, but the instability remained and the Fourth Republic saw frequent changes in government - there were 20 governments in ten years. Additionally, the government proved unable to make effective decisions regarding decolonization. As a result, the Fourth Republic collapsed and what some critics considered to be a de facto coup d'état, subsequently legitimized by a referendum on 5 October 1958, led to the establishment of the French Fifth Republic in 1959.

Chile became the first parliamentary republic in South America following a civil war in 1891. However, following a coup in 1925 this system was replaced by a Presidential one.

Since the London Declaration of 29 April 1949 (just weeks after Ireland declared itself a republic, and excluded itself from the Commonwealth) republics have been admitted as members of the Commonwealth of Nations. A number of these republics kept the Westminster Parliamentary system inherited during their British colonial rule.

In the case of many republics in the Commonwealth of Nations, it was common for the Sovereign, formerly represented by a Governor-General, to be replaced by an elected non-executive head of state. This was the case in with South Africa (which left the Commonwealth soon after becoming a republic), Malta, Trinidad and Tobago, India and Vanuatu. In many of these examples, the last Governor-General became the first president. Such was the case with Sri Lanka and Pakistan.