The Socialist Party (French: Parti Socialiste, PS) is a social-democratic[4][5][6][7] French-speaking political party in Belgium. As of the 2010 elections, it is the second largest party in the Belgian Chamber of Representatives and the largest Francophone party. The party is led by Paul Magnette, the successor of Elio Di Rupo, who became Prime Minister of Belgium as of 6 December 2011. The party also supplies the Minister-Presidents of the Walloon region and French Community (Rudy Demotte), the Brussels-Capital Region (Charles Picqué) and the German-speaking Community (Karl-Heinz Lambertz) of Belgium. In the German-speaking community, the party is known as the Sozialistische Partei (SP).

The party, or its members, have from time to time been brought into connection with criminal activities and political scandals, mostly concerning bribery and financial fraud (Cools assassination, Agusta scandal, Dassault Affair, Carolorégienne affair, ICDI affair). The Carolorégienne affair caused Jean-Claude Van Cauwenberghe to step down as Minister-President of the Walloon region.

In the 10 June 2007 general elections, the party won 20 out of 150 seats in the Chamber of Representatives and 4 out of 40 seats in the Senate. PS was a member of the Leterme I Government, Van Rompuy I Government, Leterme II Government and currently the Di Rupo I Government of 6 December 2011, with former PS leader Elio Di Rupo serving as Prime Minister of Belgium.

Results for the Chamber of Representatives, in percentages for the Kingdom of Belgium.

The ideology and image of the PS is a mix of social-democracy, combined with a modern electoral marketing (since Elio Di Rupo became the party's strongman). 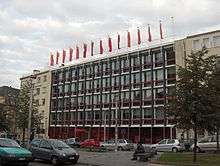 The Brussels headquarters of the PS (2006)