The Pataliputra capital is a monumental rectangular capital with volutes and Classical designs, that was discovered in the palace ruins of the ancient Mauryan Empire capital city of Pataliputra (modern Patna, northeastern India). It is dated to the 3rd century BCE. 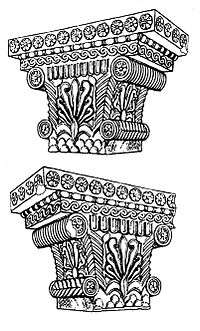 Front[1] and the back[2] views of the Pataliputra capital (drawing). The back has a few broken portions (top right corner), and a slightly less detailed and slightly coarser design.

The monumental capital was discovered in 1895 at the royal palace in Pataliputra, India, in the area of Bulandi Bagh in Patna, by archaeologist L.A. Waddell in 1895. It was found at a depth of around 12 feet (4 meters), and dated to the reign of Ashoka or soon after, to the 3rd century BCE.[3] The discovery was first reported in Waddell's book "Report on the excavations at Pataliputra (Patna)".[4] "The capital is currently in the Patna Museum.[5]

Back of the Pataliputra capital. Design is slightly coarser than the front, with only seven egg-and-darts, and less pebbles at the bottom.

The top is made of a band of rosettes, eleven in total for the fronts and four for the sides. Below that is a band of bead and reel pattern, then under it a band of waves, generally right-to-left, except for the back where they are left-to-right. Further below is a band of egg-and-dart pattern, with eleven "tongues" or "eggs" on the front, and only seven on the back. Below appears the main motif, a flame palmette, growing among pebbles.

The front and the back of the Pataliputra capital are both highly decorated, although the back has a few differences and is slightly coarser in design. The waves on the back are left-to-right, that is reverse of the waves on the front. Also, the back only has seven "eggs" in the egg-and-dart band (4th decorative band from the top), compared to eleven for the front. Lastly, the bottom pebble design is simpler on the back, with less pebbles being shown, and a small plinth or band visually supports them.[8] 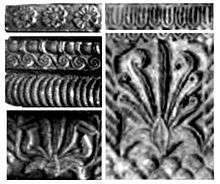 The capital is decorated with Classical Greek designs, such as the row of repeating rosettes, the ovolo, the bead and reel moulding, the wave-like scrolls as well as the central flame palmette and the volutes with central rosettes. It has been described as quasi-Ionic,[9] displaying definite Near Eastern influence,[10] or simply Greek in design and origin.[11] 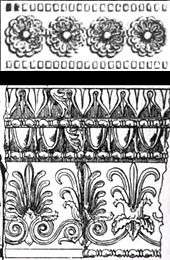 The Archaeological Survey of India, an Indian government agency attached to the Ministry of Culture that is responsible for archaeological research and the conservation and preservation of cultural monument in India, straightforwardly describes it as "a colossal capital in the Hellenistic style".[12]

The Pataliputra capital may reflect the influence of the Seleucid Empire or the neighboring Greco-Bactrian kingdom on early India sculptural art. In particular the city of Ai-Khanoum being located at the doorstep of India, interacting with the Indian subcontinent, and having a rich Hellenistic culture, was in a unique position to influence Indian culture as well. It is considered that Ai-Khanoum may have been one of the primary actors in transmitting Western artistic influence to India, for example in the creation of the manufacture of the quasi-Ionic Pataliputra capital or the floral friezes of the Pillars of Ashoka, all of which were posterior to the establishment of Ai-Khanoum.[13] The scope of adoption goes from designs such as the bead and reel pattern, the central flame palmette design and a variety of other moldings, to the life-like rendering of animal sculpture and the design and function of the Ionic anta capital in the palace of Pataliputra.[14] 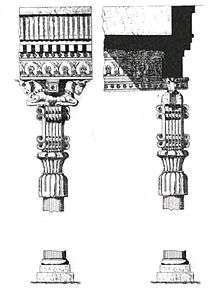 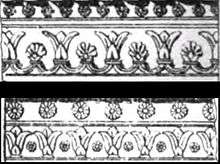 Achaemenid influence has also been noted, especially in relation to the general shape, and the capital has been called a "Persianizing capital, complete with stepped impost, side volutes and central palmettes", which may be the result of the formative influence of craftsmen from Persia following the desintegration of the Achaemenid Empire after the conquests of Alexander the Great.[15]

The authors stress that they are no known precedents in India (baring the hypothetical possibility of now-lost wooden structures), and that therefore the formative influence must have come from the neighbouring Achaemenid Empire.[16]

However, according to art historian John Boardman, everything in the capital goes back to Greek influence: the "pilaster capitals with Greek florals and a form which is of Greek origin (though generally described as Persian) go back to Late Archaic."[17] 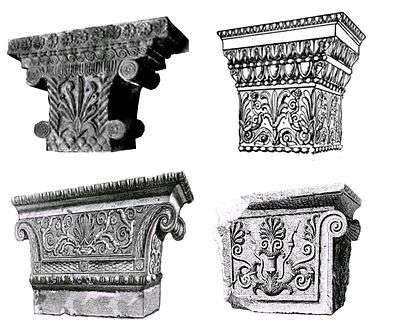 For him, the Pataliputra capital is an anta capital (a capital at the top of the front edge of a wall), with Greek shape and Greek decorations.[19] The general shape of flat, slaying capital is well known among Classical anta capitals, and the rolls or volutes on the side are also a common feature, although more generally located at the top end of the capital.[20] He gives several examples of Greek anta capitals of similar designs from the Late Archaic period.[21]

This type of anta capital with side volutes are considered as belonging to the Ionic order, starting from the archaic period. They are generally characterized by various moldings on the front, arranged in a rather flat manner in order not to protrude from the wall, with superposed volutes on curved sides broadening upwards.[22]

The central motif of the Pataliputra capital is the flame palmette, the first appearance of which goes back to the floral akroteria of the Parthenon (447-432 BCE),[23] and slightly later at the Temple of Athena Nike,[24] and which spread to Asia Minor in the 3rd century BCE, and can be seen at the doorstep of India in Ai-Khanoum from around 280 BCE, in antefix and mosaic designs.[25]

Structure as a pillar capital 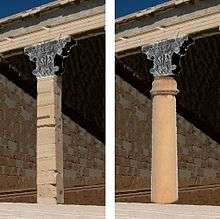 Illustration of two pillar capital arrangements for the Pataliputra capital.

Since both sides of the Pataliputra capital are decorative (there is no blank side corresponding to a wall abutment), it is normally not structurally an anta capital, but rather a pile or pillar capital: the capital of an independent supporting column of square, rectangular or possibly round section.[26] Such capitals, if set on a square column, typically retain the design of an anta capital, but are decorated in all directions, whereas an anta capital is only decorated on the three sides that do not connect to the wall. If set on a round column such as one similar to a pillar of Ashoka, an intermediary piece of round section would be placed between the pillar and the capital, such as a lotus-shaped bulbus capital as those seen on the Ashoka pillars. Rather similar arrangements can be seen, for example, at the Ajanta cave. The Pataliputra capital has two holes on the top, which would imply a mode of fixation with a structural element overhead.[27] 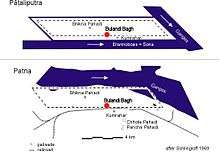 Location of the Pataliputra capital (in red, site of Bulandi Bagh) in the ancient city of Pataliputra and modern Patna.[28] 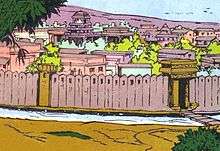 An artistic impression of the palisades, gates and city of Pataliputra.

According to the reconstitution of the city of Pataliputra by Prof. Dr. Dieter Schlingloff, the pillared hall discovered at the other excavation site of Kumhrar was located outside of the city wall, on the banks of the former Sona river (called Erannoboas by Megasthenes). It is located about 400 meters to the South of the portions of the wooden palissade that have been excavated, and just north of the former banks of the Sona river. Therefore the pillared hall could not have been the Mauryan palace, but rather "a pleasure hall outside the city walls".[29]

Monumental capitals with a central palmette design can still be found several centuries later in examples such as the Mathura lion capital (1st century CE).

A later capital found in Mathura dating to the 2nd or 3rd century (Kushan period) displays a central palmettes with side volutes in a style described as "Ionic", in the same kind of composition as the Pataliputra capital but with a coarser rendering. (photograph).[33]

The Corinthian order later became overwhelmingly popular in the Greco-Buddhist art of Gandhara, during the first centuries of our era. Various designs involving central palmettes with volutes are closer to the later Greek Corinthian anta or pilaster capital. Many such examples of Indo-Corinthian capitals can be found in the art of Gandhara. 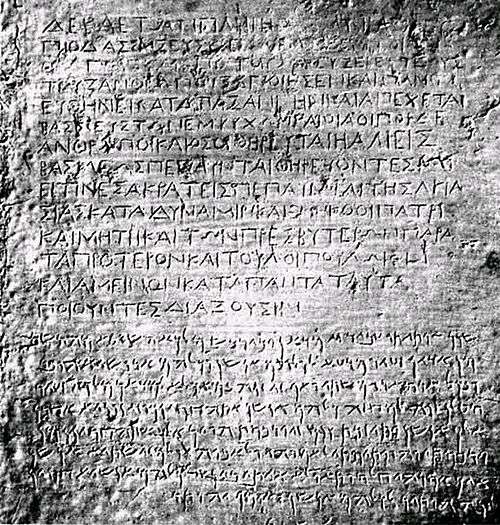 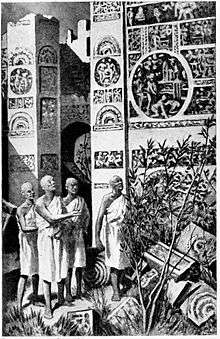 Fa-Hien at the ruins of Ashoka's palace in Pataliputra (artist impression).

The existence of such an Hellenistic capital so far east in the capital of the Maurya Empire suggest at the very least the presence of a Greek or Greek-inspired stone structure in the city. Although Pataliputra was originally built of wood, various accounts describe Ashoka as a remarkable builder of stone buildings, and he is known for certain to have built many stone pillars.[34][35] The 4th century Chinese pilgrim Fa-Hien also commented admiringly on the remains of the palace of Ashoka in Pataliputra:

"It was the work not of men but of spirits which piled up the stones, reared the walls and gates, and executed elegant carvings and in-laid sculptured works in a way which no human hand of this world could accomplish"[36]

The influence of Greek art is also well attested in some of the Pillars of Ashoka, such as the Rampurva capital with its Hellenistic floral scrolls. It is also known that Ashoka redacted some of his stone edicts in excellent Greek in Kandahar, on the doorstep to the neighboring Seleucid Empire and Greco-Bactrian kingdom.

The presence in Pataliputra of Greek diplomats such as Megasthenes is well known, but the capital raises the possibility of simultaneous artistic influence and even the possibility that foreign artists were present in the capital.[37]

According to Boardman, such foreign influence on India was important, just as many other Old World empires have been influenced by foreign cultures as well:

"The visual experience of many Ashokan and later city dwellers in India was considerably conditioned by foreign arts, translated to an Indian environment, just as the archaic Greek had been by the Syrian, the Roman by the Greek, and the Persian by the arts of their whole empire."[38]