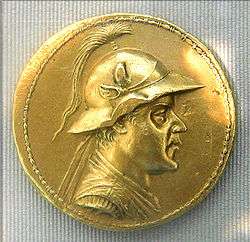 Gold 20-stater of Eucratides I within a "bead and reel" border. Cabinet des Médailles, Paris.

Bead and reel motif at the base of the capital of a Pillar of Ashoka, in Vaishali.

Frieze of the lost capital of the Allahabad pillar, with two lotuses framing a "flame palmette" surrounded by small rosette flowers, over a band of beads and reels.

"Bead and reel" is an architectural motif, usually found in sculptures, moldings, and numismatics. It consists in a thin line where beadlike elements alternate with cylindrical ones.[1][2] It is found throughout the modern Western world in architectural detail, particularly on Greek/Roman style buildings, wallpaper borders, and interior moulding design. It is often used in combination with the "egg and dart" motif.

According to art historian John Boardman, the bead and reels motif was entirely developed in Greece from motifs derived from the turning techniques used for wood and metal, and was first employed in stone sculpture in Greece during the 6th century BCE. The motif then spread to Persia, Egypt and the Hellenistic world, and as far as India, where it can be found on the abacus part of some of the Pillars of Ashoka or the Pataliputra capital. [3] Bead and reel motifs can be found abundantly in Greek and Hellenistic sculpture and on the border of Hellenistic coins.