Pattaya United Football Club (Thai: สโมสรฟุตบอลพัทยา ยูไนเต็ด) is a Thai football club based in Pattaya, Chonburi province. The club currently plays in the 2016 Thai Premier League, also known as the Toyota Thai League, and formerly known as Thai Premier League.[1] For the 2016 season the club is known as Pattaya NNK United reflecting new title sponsor. Situated in Pattaya City, one of Thailand's top tourist destinations. The Football club is one of the city's best attractions, alongside the beaches and the nightlife. The club known as Coke-Bangpra Chonburi FC before it changed to Pattaya United FC in 2008 as the team was promoted to TPL.

Pattaya United's first ever competitive game was against Thailand Division 2 League side Raj Pracha in the 2009 Queen's Cup which they won 5–0. For 6 years the club remained in the TPL, and finished as high as sixth, and fourth in 2010 and 2011 respectively. The Dolphins were relegated to the Yamaha League One in 2014. When, in January 2015, the club was officially sold to Enigma Sport Ventures, this marked the first change in ownership in the club history.

The club was founded under the name Coke-Bangpra Chonburi FC which derived from the sponsor and the community Bang Phra (บางพระ) in the district of Sriracha, the province of Chonburi. After several years in the Provincial League of Thailand, the club was promoted to the Thai Premier League for 2008 season. As the result of the promotion to the TPL, the team was renamed to "Pattaya United" and moved to the city of Pattaya. In the first season in the top flight division, the team finished in 11th place at the end of the season.

The team moved to Pattaya for the 2008 season, and changed its name to Pattaya United FC (The Dolphins), in their first season under the new name the team finished in 11th place in the Thai Premier League, only avoiding relegation in the final game of the season. However, the following seasons the team improved to finishing as high as sixth, and fourth in 2010 and 2011 respectively. The team which have always been looked at as "little brother" team to Chonburi FC as they both were owned by the Kunpluem family, an affluence local family in Chonburi province. The club have shown potentials, winning against teams with double or triple its annual budget, winning the hearts of the Thai, and Foreign fans alike. After spending 6 years in the TPL, and the Dolphins were relegated to the Yamaha League One in 2014. During the off season, the future of the club was uncertain with various speculations.

However, in January 2015 the club was sold to Enigma Sport Ventures (ESV), the sporting arm of the Enigma Global. It marked the first change in ownership in the club history, after several lucrative bids were submitted for the Kunpluem family's consideration. The family, and Pattaya United board felt that the club's best interest, and future lies with Enigma Sport Ventures.

The new ownership's management team moves very quickly in rebranding the club, appointing the new President, Club's first foreign Head Coach, and securing 8 top players from TPL to play in the Division One. Many of which were former "first 11" players from Muangthong United FC, as well as couple Thai and foreign national team players.

The club's fierce local rivals are Chonburi and Sriracha which all are in the same province of Chonburi. Despite all three teams were previously own by the Kunpluem family, they have always compete hard against one another. Also the team over the years were not often in the same division/league as one another, when they met the game have always been a very highest attendance games. In recent years, the rivalries between Chonburi and Pattaya have been the most highly anticipated game of the year in Chonburi province. 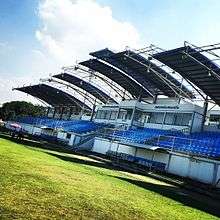 Nong Prue Stadium, formally known as Nongprue Municipality Football Field in Pattaya originally designed to hold just over 3,000 spectators, but over the year the additional seats were required to accommodate more fans. So as the result of that, the stadium was renovated once in 2011. Under the new ownership of Enigma Sport Ventures, the stadium is currently undergo the renovation to accommodate up to 5,500 spectators. As well as additional required upgrades by the TPL to make the stadium competition worthy for the 2015 season. In addition to the renovation to the stadium, the new gift shop and club onsite office are added to the stadium ground.

Stadium and locations by season records

Coaches by year from 2007 to present.