Muangthong United Football Club (Thai: สโมสรฟุตบอล เมืองทอง ยูไนเต็ด) is a Thai football club based in Muang Thong Thani, Nonthaburi Province and other private investors.[1] The club currently plays in the Thai League. Muangthong United has participated in the Thai Premier League since 2009 when they won the Thai Division 1 League title in 2008.

Muangthong United is one of the richest football clubs in Thailand. The club is widely known as The Twin Qilins.[2]

The club was founded in 1989. The first name registered with Football Association of Thailand was "Norgjorg Pittayanusorn Football Club". Norgjorg Pittayanusorn Football Club was founded by Worawi Makudi the club race from Ngor Royal Cup, which is the smallest cup. Even in Thailand Football League Division 1 season 2002–2003, Norgjorg Pittayanusorn Football Club was renamed "FC Norgjorg Black Pearl" by the former politician Veera Musikapong to make the team, but the team had just one season and was unsuccessful so he stopped by leaving the team and the club still remained in the League Division. The next season of the Thailand League Division 1 in 2003–2004 the team was renamed once again as a group that has been done the team as FC Globlex Norgjorg by Somsak Chenchaowanich who signed as the new team manager. That year, the team performed poorly. Finally, it must be relegated to play in Ngor Royal Cup in season 2004–2005 by returning to its original name but it was not as successful as it should. The Football Association wants to raise the level of league competition in Thailand so they established Thailand Division 2 League with a team led by Kho Royal Cup and Khor Royal Cup are mixed together to compete in the league this season which Norgjorg Pittayanusorn Football Club eligible entrants. In 2007 Siam Sport Syndicate by Rawi Lohtong the president of Siam Sport Syndicate bought the club and changed the name to Muangthong United and moved to a new ground at Muang Thong Thani called Thunderdome Stadium. The club's first success was winning the first place in the 2007 Season of the Thailand Division 2 League. From here, they were promoted to the Thai Division 1 League.[3] The team was then promoted to the Thai League in the 2009 season so everyone praised Muangthong United in that season as "3 Years 3 Champs" team.

The club was promoted to play in the Thai Premier League in 2009, after it won the title for the Division one. In the 2009 season, the club had many new and notable players in the country. Despite a successful start to the season, they pledged in April 2009 with Attaphol Buspakom a new coach. For the summer break, the association is, as expected by all experts, among the top five of the table and plays for the championship.[4]

One factor of success would certainly be the close links between the Club and Belgian club Lierse, was on summer break, the Thai star player Teeratep Winothai joined the team. At the same time joined with Ronnachai Rangsiyo, the master FC PEA, another storm talent for Nonthaburi. The association has with Ronnachai Rangsiyo, Teerasil Dangda and Teerathep Winothai, now probably the most talented strikers in the country in its ranks.[5][6]

In 2010. After Attaphol Buspakom sacked following a string of unsuccessful results, and René Desaeyere Belgium Coach managed Muangthong for two season.Rene lead Muangthong qualified for the 2010 AFC Champions League.they beat SHB Đà Nẵng from Vietnam 0–3 but lost out to Singapore Armed Forces on penalties after the game ended in a 1–1 draw and They were eligible to play for the 2010 AFC Cup. They have access to Semi final round by lose to Al-Ittihad from Syria 2–1. In 2010 Thai Premier League they lost just three games and seven draws of 30 game. Which the club won the league for a second and Dagno Siaka is top score for club in 2010 season by 15 goal. [7]

At the start of the season Muangthong United signed former Liverpool player Robbie Fowler, who signed a one-year contract. Muangthong United participated in the 2011 AFC Champions League in play off round. They played Sriwijaya but lost on penalties after the game ended in a 2–2 draw. They were also eligible to play for the 2011 AFC Cup, coming first in the group stage of the tournament. In their first match of the round of 16 they beat Al Ahed from Lebanon 4–0 but went on to lose to Kuwait SC in the quarter-finals round 1–0. After their tournament exit Henrique Calisto, the clubs manager, was sacked and Fowler took over as player/coach of Muangthong United.[8][9][10][11][12]

In 2011 Thai Premier League Muangthong United finished the season in third place in Thai league. For the 2010–11 season and Teerasil Dangda is top score for club in 2011 season by 13 goals.[13]

In this season, the club did not play in the AFC Champions League or AFC Cup. Therefore, it tried to do the best in 2012 Thai League Cup, but they lost to TOT 3–4 and 2012 Thai FA Cup they lost to Army United 3–2, but they can win the 2012 Thai Premier League is a third of the club and Muangthong United became the first team in Thai League to go the season unbeaten in the current 34-game format. In 2012, thumb Muangthong engaged an unbeaten run which lasted the whole season, and Teerasil also scored four goals in a single match, an 8–1 routing over BBCU on 18 October.[7] Ten days later he scored in a 2–2 draw against BEC Tero, a goal which granted the title, took his tally to 24 goals and broke the previous record of Ronnachai Sayomchai in 1998 (23 goals).

After his impressive goal tally in the season, Teerasil was invited by La Liga sides Atlético Madrid and Getafe for a trial, but as the former was a Muangthong partner, he headed to Atlético Madrid in January 2013; he also attracted interest of Trabzonspor in June.[15]

Peerapat,Chanathip,Tanaboon signed with Muangthong United in 2016 for dream team campaign

After Muangthong United never got any trophy for 3 year after seasons 2012 the club made a campaign "The Dream Team" because they signed on many famous national team players as Peerapat Notchaiya, Theerathon Bunmathan, Adisak Kraisorn, Tanaboon Kesarat, Chanathip Songkrasin, Tristan Do, Adison Promrak and famous international player as Xisco former Newcastle United player and signed a contract with Totchtawan Sripan former national player who was ones of the Thai football legend to be new head coach. In this season Muangthong United won a famous double, becoming champions of the Thai League and League Cup. 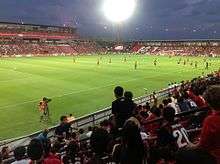 SCG Stadium is a football stadium located in Nontaburi, Thailand, and is the home of Thai League's side, Muangthong United. Yamaha Stadium was the first operate football stadium in Thailand, while PAT Stadium and TOT Stadium Chaeng Watthana constructed without operate including there are others older stadiums, they're all considered as multi-purpose stadiums. [16] The stadium used to be able to hold as much as 20,000 spectators but the number reduced after renovation by filling in chairs to make the stadium all seated with a capacity of 15,000 people.[17] 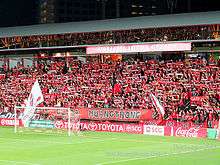 Play their home games Muangthong United from the Yamaha Stadium. A stadium which originally offered about 5,000 spectators. The stadium has unlike most stadiums in Thailand no running track. Due to the success, and the increasing number of spectators, the stadium was built with steel tube stands at 15,000 seats during the season. After the end of the 2009 season began that the existing plans for a stadium expansion into action. Were not designed for a capacity of approximately 15,000 spectators, the first draft, it was later changed to 25,000. As one of the few stadiums in Thailand, it is then also have VIP areas.[18][19]

The club managed to develop a very large fan base in a short time. At away games, the fans are represented very numerous mot. Games against Chonburi and Bangkok Glass are among the highlights of the season. This 2009 new attendance records for the league could be set up in the season. For the games against Chonburi and Bangkok Glass, there was even a first time ticket sales. This should slow down the expected rush for tickets. For football in Thailand, this was a novelty. The core of fans of Muangthong consists of the Ultra Muangthong. They were also the first who brought the Ultra movement in Thailand's stages. Large banners, flags and double holder characterize the Fangruppierung, as well as a "pre-Inger" with megaphones. [20]

The environment of the organization is considered to be extremely professional. The newcomer to the Thai Premier League is the previous top Chonburi in terms of marketing and merchandise while in nothing and is even there to overtake him. The owner of the club, the Siam Sports Syndicate, this is one of the largest media companies in the sport of Thailand. Thus, the company was the sponsor of the Thai Association Cup in 2009 and also has the rights to the live broadcasts of the Thai Premier League.

The rivalry with Port is rooted in Kor Royal Cup stampede when Port was forfeited due to crowd riots in 2009. In 2014 Muangthong United fans and Port fans were riot with armed rebellion at Udon Ratthaya Expressway in Pak Kret Expressway area so that police and military were come out to fix the problem . In 2016 the fans of these 2 team were making riot it again in the same area this event makes Football Association of Thailand must introduce measures for something to solve this problem. Their matches are usually considered by the players and their fans as the biggest in any given season.

The rivalry with Buriram United arises from the numerous times the two teams, as well as Buriram United is represent as rustic people and Muangthong United is represent as urban people,In the samesides these two team was represent two different politics party sides in Thailand that sent their member to elect for presidents of Football Association of Thailand ,have battled for the Thai League title. With 19 titles between them (5 for Buriram United, 3 for Muangthong United) this fixture has become known as one of the finest Thai League match-ups in history.

The following are the sponsors of MTUTD (named "MTUTD Partners"):