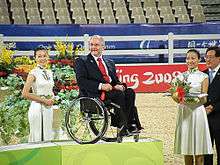 Sir Philip Craven MBE (born 4 July 1950) is a British sports administrator and former athlete. He is the second and current President of the International Paralympic Committee (IPC).

Craven was born on 4 July 1950 in Bolton, England.[2] He was educated at Bolton School Boys' Division, where he was a keen swimmer, cricketer and tennis player. In 1966, at the age of 16, he fell during a rock-climbing expedition at Wilton Quarries, Bolton. The accident left him without the use of his legs.[3] He studied geography at the University of Manchester, and graduated with a Bachelor of Arts (BA) degree in 1972.[4]

Craven represented Great Britain in wheelchair basketball at five editions of the Paralympic Games, from 1972 to 1988. He also competed in track and field athletics and swimming at the 1972 Games.[5][6]

Results at the Paralympic Games

In 1980, alongside Horst Strohkendl and Stan Labanowich, Craven played a vital role in the development of a new classification system for wheelchair basketball athletes. Wheelchair basketball rejected its medically based classification system consisting of 3 classes, a system that was founded upon principles that forced athletes to depend on medical examinations. This progress led to a new 4-class functional system, which was democratically voted in 1982. Due to this, wheelchair basketball was increasingly associated with sport as opposed to medicine and rehabilitation, although both still play an important secondary role.

In 1988, Craven was elected Chairman of the Wheelchair Basketball Section of the International Stoke Mandeville Games Federation (ISMGF), the first athlete to lead the sport worldwide. Craven's striving for self-determination and self-government pave the way for the establishment of wheelchair basketball as an independent federation, when it gave up its previous identification as a basketball section of the ISMGF to become the independent, self-governing International Wheelchair Basketball Federation (IWBF) in 1993. At the First IWBF Official World Congress 1994 in Edmonton, Alberta, Philip Craven was elected the first President of IWBF, holding the office until 1998. A productive and more formalised working relationship with FIBA, the worldwide governing body for the sport of basketball, was arranged under Craven's administration, to further legitimise wheelchair basketball itself.

Craven was elected as the second President of the International Paralympic Committee in 2001, a position he continues to hold today.

On 7 August 2016, Craven announced that the International Paralympic Committee is banning Russia from participating in the 2016 Paralympic Games for allegedly violating international doping rules.[8] This followed WADA's June 2016 report [9] with accusations of state-sponsored doping in Russia. Craven put the blame for the ban on Russia's government, stating that Russia has "catastrophically failed its para athletes," adding, "their medals-over-morals mentality disgusts me."[8] Russia's appeal to the CAS against the ban was rejected,[10] a decision that prompted President Vladimir Putin's public accusations against the international bodies responsible for imposing the ban.[11]

Craven served as Company Secretary at the British Coal Corporation from 1986 up to 1991.

He is an Ambassador for Peace and Sport, a Monaco-based international organisation,[12] committed to serving peace in the world through sport.