The 1988 Summer Paralympics (Hangul: 서울 하계 패럴림픽; Hanja: 서울 夏季 패럴림픽; RR: Seoul Hagye Paeleollimpik), were the first Paralympics in 24 years to take place in the same city as the Olympic Games. They took place in Seoul, South Korea. This was the first time the term "Paralympic" came into official use.

The Seoul Paralympic Organizing Committee (SPOC) designed the first Paralympic Symbol which was used from 1988-1994. The Five 'teardrops' (resembling the halves of the taeguk pattern, also found in the Korean flag) in the 'W' configuration and colours of the Olympic rings represented the five oceans and the five continents.[1] This symbol was eventually changed in 1994, as it was considered to be too close to the International Olympic Committee's (IOC) 5-ring emblem.[4] The 1988 Seoul Paralympic Games is considered as the genesis of the Modern Paralympic Games.[3] 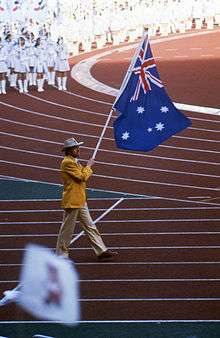 During the Opening Ceremony there were more than 75,000 people within the Olympic Stadium with a then record of 3,057 competitors from 61 nations.[5] The President of South Korea, Roh Tae-Woo, presented the new Paralympic flag to the President of the ICC, Jens Bromann.[2] Paul Croft, competing in his second Paralympic Games, was the flag bearer for Australia during the Opening Ceremony.[6] Parachutists in the Paralympic colors of blue, black, red, yellow, and green swept down into the Olympic Stadium following a procession of children in wheelchairs.[7] The Olympic Torch was carried in by a one-legged South Korean Paralympic volleyball player and handed to 19 year old Cho Hyun-hui, a wheelchair bound athlete with cerebral palsy. Cho Hyun-hai was wheeled around the stadium by her 7-year-old daughter before handing the Torch to blind runner Lee Jae-oon, who linked hands with women's handball Olympic gold medalist Kiifi Hyun-mi, who together, were carried up by elevator platform to light the Olympic Flame.[7]

Chief Paralympic Organiser Koh Kwi-nam addressed the athletes by saying "The goal you as athletes should try to reach for in the Games is not to accomplish the Olympic slogan of 'faster, higher and farther' but to show the world your real selves as courageous challengers, glorious conquerors and impartial participants."[7]

The Seoul Paralympic Games were not without controversies. The Iranian goalball team were disqualified for refusing to play against the Israeli team. It was deemed that the Iranian team had misused the sporting platform for political aims by the ICC who made immediate arrangements to send the team home.[2] Asghar Dadkhan, the Iranian team manager, made a formal statement of apology pledging that all other Iranian athletes would compete with full regard to the regulations and would compete against Israel and any other nation.[2]

A Libyan team arrived at the Seoul Paralympic Games without having gone through the normal entry procedures.[2] The SPOC urged the ICC to accept the Libyan team and a compromise was reached, permitting the Libyans to participate as observers. They could compete in the marathon event, however they would not have any medal entitlement, nor would they be officially recognized at the Closing Ceremony.[2]

Twenty-seven athletes were incorrectly awarded medals after the first round of competition in the men's and women's wheelchair slalom event. The mistake was discovered when officials realised that the medals should not have been awarded until after a second round of competition.[8]

The games consisted of events in seventeen sports, including one demonstration sport, but the medals count for the official medal list. Powerlifting and weightlifting were considered to be a single sport.[9]

The top ten listed NOCs by number of gold medals are listed below. The host nation, South Korea, is highlighted.

Sixty delegations took part in the Seoul Paralympics.[10] Burma, which had taken part in the previous Games, was absent. The Seoul Paralympics occurred mere weeks after the 8888 Uprising and the military coup which brought the State Peace and Development Council to power. Burma would return as Myanmar in 1992.[11]