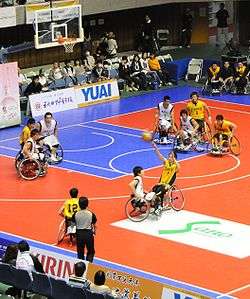 Wheelchair basketball is basketball played by people with varying physical disabilities that disqualify them from playing an able-bodied sport. Some examples are; spina bifida, birth defects, cerebral palsy, paralysis due to accident, amputations (of the legs, or other parts), and many other disabilities. The International Wheelchair Basketball Federation (IWBF) is the governing body for this sport. It is recognized by the International Paralympic Committee (IPC) as the sole competent authority in wheelchair basketball worldwide. FIBA has recognized IWBF under Article 53 of its General Statutes.[1]

In 1944, Ludwig Guttmann, through the rehabilitation program at the Stoke Mandeville Hospital, in Aylesbury, Buckinghamshire, England, adapted existing sports to use wheelchairs. It was known as wheelchair netball.

At around the same times, starting from 1946, wheelchair basketball games were played primarily between American World War II disabled veterans. This began in the United States at the University of Illinois. Dr. Timothy Nugent founded the National Wheelchair Basketball Association in 1949 and served as Commissioner for the first 25 years.[3]

The Stoke Mandeville Wheelchair Games, held in 1947, were the first games to be held and included only a handful of participants (26), and few events (shot put, javelin, club throw, and archery).

Growth in both the number of wheelchair events and participants came quickly. Wheelchair netball was introduced in the 1948 Games. In 1952, a team from the Netherlands was invited to compete with the British team. This became the first International Stoke-Mandeville Games (ISMG), an event that has been held annually ever since.

Wheelchair basketball, as we know it now, was first played at the 1956 International Stoke-Mandeville Games. The US "Pan Am Jets" team won the tournament.[4]

Wheelchair basketball at the University of Worcester, England (video) 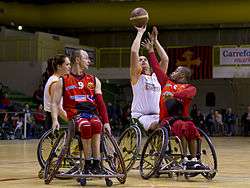 Competitors in the 2012 Euroleague tournament

In 1973, the International Stoke Mandeville Games Federation (ISMGF) established the first sub-section for wheelchair basketball. At that time ISMGF was the world governing body for all wheelchair sports.

In 1989 ISMGF accepted for its former wheelchair basketball sub-section to be named International Wheelchair Basketball Federation also known by the acronym IWBF.

Full independence came in 1993 with the IWBF becoming the world body for wheelchair basketball with full responsibility for development of the sport. Over the following years IWBF membership grew in size and based on the number of National Organizations for Wheelchair Basketball (NOWB’s) with active programs, the international federation configured itself into four geographical zones: Africa, Americas, Asia/Oceania and Europe.

Divisions of Wheelchair Basketball in the Unites States

There are currently 8 divisions in wheelchair basketball within the US.

This division is for children aged 13 and younger. This is the only division where any aspect of the court is altered. The basket is lowered to 8.5 ft for this division.

This division is for children ages 13 to 18, and they must be enrolled in school. There are no alterations to the court for this division.

This division is for adult teams and allows newer players and newer or lesser developed teams the ability to play at a developmental or recreational level. A new adult team begins in this division. As they compete, they have the opportunity to go up to Division II.

This division is for adult teams and allows the experienced and more developed players and teams to play mid-level competition. Teams in this division also have the opportunity to go up to Division I

This division is for adult teams. Formerly known as Championship Division. Allows the elite level and experienced individuals and teams to play at the highest level competition.

This division is for men attending a University that has a sponsored team. Intercollegiate Division features collegiate athletes promoting their schools through wheelchair basketball. Some of the most enthusiastic crowds can be found at these games.

This division is for women attending a University that has a sponsored team. Most of the time, but not always, a college that has a women's wheelchair basketball team also has a men's wheelchair team.The Intercollegiate Women's Division features some of the best college level women athletes. The ball used is the standard women's size basketball.

This division is for women aged 15 and older. The Women's Division features a number of our community teams solely developed for the Women's game. The ball used is the standard women's size basketball. 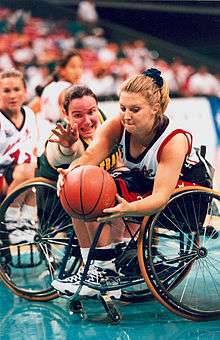 Wheelchair basketball retains most major rules and scoring of basketball, and maintains a 10-foot basketball hoop and standard basketball court. The exceptions are rules which have been modified with consideration for the wheelchair. For example, "travelling" in wheelchair basketball occurs when the athlete touches their wheels more than twice after receiving or dribbling the ball. The individual must pass, bounce or shoot the ball before touching the wheels again.[7]

In some countries such as Canada, Australia and England, non-disabled athletes using wheelchairs are allowed to compete alongside other athletes on mixed teams.

Classification is an international regulation for playing wheelchair basketball to harmonize the different levels of disabilities players have. All teams which compete above a recreational level use the classification system to evaluate the functional abilities of players on a point scale of 1 to 4.5. Minimally disabled athletes are classified as a 4.5, and an individual with the highest degree of disability (such as a paraplegic with a complete injury below the chest) would have the classification of 1.0. Competitions restrict the number of points allowable on the court at one time. The five players from each team on the court during play may not exceed a total of 14 points. In places where teams are integrated, non disabled athletes compete as either a 4.5 in Canada or a 5.0 in Europe, however non-disabled athletes are not allowed to compete internationally.[8]

Basketball wheelchairs are designed for enhanced stability. The center of gravity is where the chair and the athlete’s mass are equally distributed in all directions. Points at which the wheelchair can tip over sideways are the fulcrum. A wheelchair with a higher seat is easier to tip. Basketball chairs have lower seats and wheels that are angled outward so that the center of gravity has to move a greater distance before it passes over the fulcrum and tips the chair. Guards use wheelchairs different from those of centers and forwards. Forwards and centers are typically under the net, their chairs have higher seats and therefore less mobility, but the height increases the player's reach for shots at the hoop and for rebounds. Guards have lower seats and therefore greater stability for ball handling and getting down the court as quickly as possible.[9]