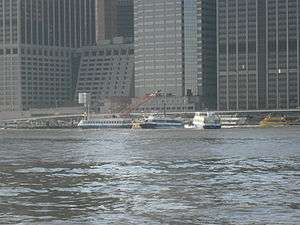 Ferries at landing on East River in Lower Manhattan 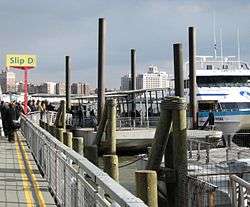 SeaStreak formerly operated weekday commuter service to Rockaway, Queens.[3][4] The service began in November 2012 in the aftermath of Hurricane Sandy, which heavily damaged subway infrastructure in Queens and Brooklyn, but was discontinued in October 2014 once all repair work had been completed.[5] 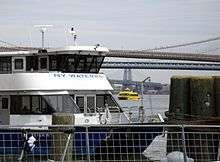 New York Water Taxi operates the IKEA Express Shuttle to the Ikea store in Red Hook, Brooklyn. Passengers who make a purchase of a certain amount ride the ferry for free.[8]

Pier 11 Wall Street is expected to be a main hub of the Citywide Ferry Service[10] starting in 2017, with routes to Bay Ridge, Rockaway, Governors Island, Astoria, Lower East Side, and Soundview. It will also be integrated with NY Waterway's East River Ferry.[11][12]