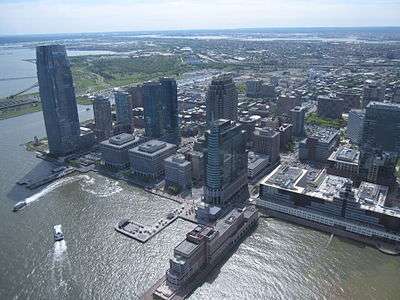 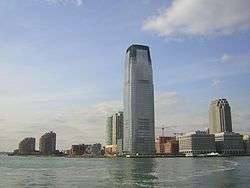 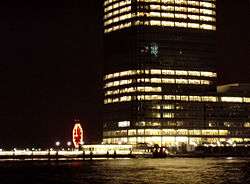 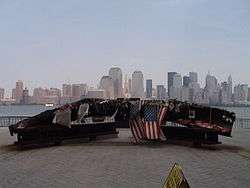 A memorial made from steel girders of the World Trade Center

Exchange Place is a district of Downtown Jersey City, New Jersey, United States, that is sometimes referred to as "Wall Street West" due to the concentration of financial companies that have offices there. The namesake is a square, about 200 feet long, at the foot of Montgomery Street at the Hudson River. This square was created by the landfilling of the shore at Paulus Hook, and has been a major transportation hub since the colonial era.[1]

A high concentration of highrise office and residential buildings in the city are located in the district radiating from Exchange Place, which since the 1990s has overtaken Journal Square as Hudson County's major business district and become a major business center along the redeveloped waterfronts in the Port of New York and New Jersey. The Mack-Cali building is host to several nesting sites for peregrine falcons. The New Jersey Department of Environmental Protection, Division of Fish & Wildlife, maintains a Jersey City Peregrine Cam at some of the sites on the building. The Hudson River Waterfront Walkway crosses Exchange, the other side of which is J. Owen Grundy Park, extending into the Hudson River. The Katyń Memorial by well-known Polish-American artist Andrzej Pitynski is the first memorial of its kind to be raised on American soil to honor the dead of the Katyń Forest massacre.[2] To the south are New York Waterway's Paulus Hook Ferry Terminal, and Goldman Sachs Tower, the tallest building in New Jersey. The Colgate Clock, promoted by Colgate-Palmolive as the largest in the world, faces Battery Park in lower Manhattan. The clock, which is 50 feet (15 m) in diameter with a minute hand weighing 2,200 pounds, was erected in 1924 to replace a smaller one that was relocated to a plant in Jeffersonville, Indiana.[3] The riverfront promenade ends at the Morris Canal Little Basin, part of Liberty State Park. To the north is the former warehouse now housing Harborside Financial Center.

The first steam ferry service in New York Harbor and the world was established in 1812 by Robert Livingston (1746-1813) and Robert Fulton and travelled between Paulus Hook and Cortlandt Street in Manhattan.[4] The ferry dock stood at the head of the important highway to Newark (and points west and south) established in 1795.[5] The ferry in turn influenced the location of the terminal of the New Jersey Railroad, which opened in 1838 running from the ferry dock via Newark to New Brunswick. The railroad purchased the ferry operation in 1853[6] and in 1858 built a much-needed larger intermodal terminal. After acquiring the railroad in 1871, the Pennsylvania Railroad replaced the terminal in 1876 and yet again in 1888-1892.[7] Passengers could move directly between the trains and ferries without going outside (a similar plan can still be seen today at Hoboken Terminal). The railroad referred to the location simply as Jersey City, and if necessary to distinguish it from other railroads' terminals, as the Pennsylvania station.

It was probably the street railways, the local transportation in Jersey City, that first needed to identify the location more precisely as Exchange Place. Beginning with horsecars in 1860, the local network connected the ferry with neighborhoods in the city and nearby towns. An off-street terminal called "Exchange Place" was established in 1891. It was almost at the water's edge, across the street from the Pennsylvania Railroad terminal and with easy access to the ferries.[8] Cars with signs reading EXCHANGE PLACE could be seen all over town. In 1901, the privately held land was given to the city by the PRR.[9]

For many years the location functioned similarly to Hudson Place, farther up the Hudson waterfront, as a terminus for the many trolley lines which crisscrossed Hudson County, as well as for those which travelled farther, from destinations such as the Newark Public Service Terminal, or the Broadway Terminal in Paterson. At one time more than ten lines operated by the Public Service Railway originated/terminated here. The substitution of rail lines with busses, colloquially known as bustitution, was completed in 1949.[15]

Ferry services were also discontinued in 1949,[16] and while the Pennsylvania Railroad service dwindled after the opening of Penn Station in New York in 1910, it did not end until 1962.[17] Following the end of service on the Jersey City Branch, the remains of the large terminal were demolished, leaving a large open space on the waterfront. This and the elimination of other railroad passenger and freight yards along the river during the 1960s and 1970s opened up the land that would be used for redevelopment. The continued use of the name "Exchange Place" was based on the Hudson and Manhattan station (PATH since 1962) and signs on the bus routes that had replaced the trolleys.

Since 2000, both a trolley service, in the form of the Hudson Bergen Light Rail, and a ferry service, provided by NY Waterway at the Paulus Hook Hook Ferry Terminal, have been restored. It is also the terminus for several New Jersey Transit and privately operated bus routes. 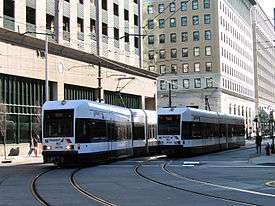 Three stations of the Hudson Bergen Light Rail in the district are Harborside Financial Center, Essex Street and Exchange Place, where transfer to PATH and ferry are possible. 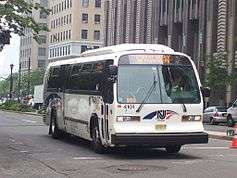