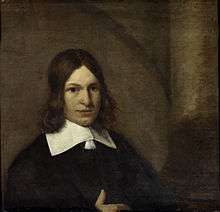 Pieter de Hooch (Dutch: [ˈpitər də ɦoːx], also spelled "Hoogh" or "Hooghe"; 20 December 1629 (baptized) – 24 March 1684 (buried)) was a Dutch Golden Age painter famous for his genre works of quiet domestic scenes with an open doorway. He was a contemporary of Jan Vermeer in the Delft Guild of St. Luke, with whom his work shares themes and style.

De Hooch was born in Rotterdam to Hendrick Hendricksz de Hooch, a bricklayer, and Annetge Pieters, a midwife. He was the eldest of five children and outlived all of his siblings. Little is known of his early life and most archival evidence suggests he worked in Rotterdam, Delft, and Amsterdam. According to his first biographer Arnold Houbraken, he studied art in Haarlem under the landscape painter Nicolaes Berchem at the same time as Jacob Ochtervelt and was known for his "kamergezichten" or "room-views" with ladies and gentlemen in conversation.[1] But De Hooch's work seems to continue in the spirit of Hendrik Sorgh, an older Rotterdam painter who had a special affinity for organizing figures in interiors. Beginning in 1650, he worked as a painter and servant for a linen-merchant and art collector named Justus de la Grange in Rotterdam. His service for the merchant required him to accompany him on his travels to The Hague, Leiden, and Delft, to which he eventually moved. It is likely that de Hooch handed over most of his works to la Grange during this period in exchange for board and other benefits, as this was a common commercial arrangement for painters at the time, and a later inventory recorded that la Grange possessed eleven of his paintings.

De Hooch was married in Delft in 1654 to Jannetje van der Burch, by whom he fathered seven children. While in Delft, de Hooch is also believed to have learned from the painters Carel Fabritius and Nicolaes Maes, who were early members of the Delft School. He became a member of the painters' guild of Saint Luke in 1655 (two years after Vermeer). His daughter Anna was born in Delft on 14 November 1656.[2] Based on the fact that his wife attended a baptism in Amsterdam in 1660, it has been determined that he moved to Amsterdam by then, though the success of the trekschuit by then meant that a trip to Amsterdam could be made easily in a day.[3]

The early work of de Hooch was mostly composed of scenes of soldiers and peasants in stables and taverns in the manner of Adriaen van Ostade, though he used these to develop great skill in light, color, and perspective rather than to explore an interest in the subject matter.

After starting his family in the mid-1650s, he switched his focus to domestic scenes. These were possibly of his own family, though his works of well-to-do women breastfeeding and caring for children could also indicate that he had attended his mother on her rounds as a midwife.

His work showed astute observation of the mundane details of everyday life while also functioning as well-ordered morality tales. These paintings often exhibited a sophisticated and delicate treatment of light similar to those of Vermeer, who lived in Delft at the same time as de Hooch.

The themes and compositions are also very similar between De Hooch and Vermeer. 19th-century art historians had assumed that Vermeer had been influenced by de Hooch's work and indeed PDH demonstrated first early on a special interest in combining the figure with interior geometry(see Interior with a Mother and Child and a Servant c1656 and others). An x-ray of the Interior with a Woman Weighing a Gold Coin shows that De Hooch had tried another figure in the empty chair first so this points to his canvas being the more original model that Vermeer quoted.

De Hooch also shared themes and compositions with Emanuel de Witte, though De Witte soon devoted himself mainly to painting church interior scenes after moving to Amsterdam in 1651. De Witte seems more preoccupied with the rooms themselves, filling his paintings with objects, and De Hooch is more interested in people and their relationships to each other, leaving his rooms empty of any extra objects that don't support the scene.

In the 1660s, he began to paint for wealthier patrons in Amsterdam, and is known for merry company scenes and family portraits in opulent interiors with marble floors and high ceilings.

During his time in Amsterdam, he continued to make his domestic scenes, but both the interiors and their occupants appear more opulent.

Little is known of De Hooch's living arrangements in Amsterdam, though it has been established that he had contact with Emmanuel de Witte.[2] In 1670, he was living in the Konijnenstraat.[3] He lived in an area outside of the city walls but near the Westerkerk where his family attended church. Most scholars believe that de Hooch's work after around 1670 became more stylized and deteriorated in quality. It may be that his work was affected by his distress at the death of his wife in 1667 at age 38, leaving him with a young family. After 1680, de Hooch's painting style became coarser and darker in color. It was once widely assumed that he died in an asylum in 1684, but new documentation* from that institution proves that it was in fact his son who had died there, also named Pieter. The year of the artist's death remains a mystery. 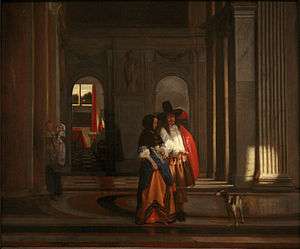 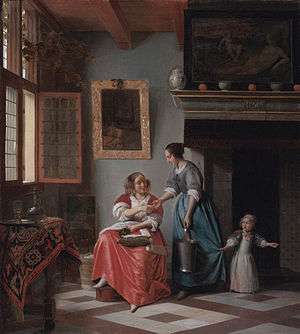 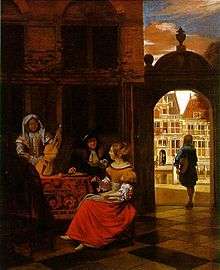