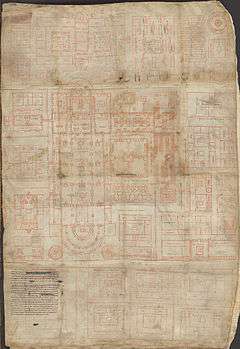 The Plan of Saint Gall is a famous medieval architectural drawing of a monastic compound dating from the early 9th century. It is preserved in the Stiftsbibliothek Sankt Gallen, Ms 1092.

It is the only surviving major architectural drawing from the roughly 700-year period between the fall of the Western Roman Empire and the 13th century. It is considered a national treasure of Switzerland and remains an object of intense interest among modern scholars, architects, artists and draftsmen for its uniqueness, its beauty, and the insights it provides into medieval culture.

The Plan depicts an entire Benedictine monastic compound including churches, houses, stables, kitchens, workshops, brewery, infirmary, and even a special house for bloodletting. The Plan was never actually built, and was so named because it was kept at the famous medieval monastery library of the Abbey of St. Gall, where it remains to this day. It was drawn in a scriptorium in Reichenau in the third decade of the 9th century, dedicated to Abbot Gozbert (816–836) of Saint Gall.

The Plan was created from five parchments sewn together measuring 45 inches by 31 inches (113 cm by 78 cm) and drawn in red ink lines for the buildings, and brown ink for lettered inscriptions. It is drawn to an "unusual" scale of 1:192 (although as explained in detail in the "The Plan of St. Gall in brief" by Lorna Price, this is 1/16" to the foot, which would not be so surprising as necessary to place the overall plan onto this size piece of parchment). The reverse of the Plan was inscribed in the 12th century, after it had been folded into book form, with the Life of Saint Martin by Sulpicius Severus. About 350 partly rhyming appendices in the handwritings of two different scribes describe the functions of the buildings. The dedication to Abbot Gozbert is written in the margin. 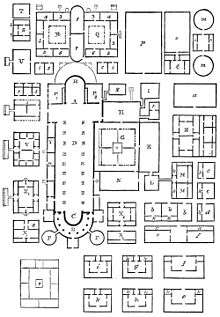 A copy of the plan

Because the plan does not correspond to any place that was actually built,[1] just about every aspect of the Plan is disputed by modern scholars. Debates continue on things such as which system of measurement was used; whether the scale is a single scale for the entire plan or varied for different elements; if the plan is a copy from a lost prototype or the original; if it is reflective of a single individual's ideas, or those of monastic council.

Despite the unknowns, much has been learned about medieval life from the Plan. The absence of heating in the dining hall, for instance, may not have been an oversight but was meant to discourage excessive enjoyment of meals. In the quarters for the 120–150 monks, their guests, and visitors, the ratio of toilet seats was better than what modern hygienic codes would prescribe.

The plan was dedicated to Gozbertus, the Abbot of St Gall from 816–36. The text reads [as translated by Horn into English]

For thee, my sweetest son Gozbertus, have I drawn this briefly annotated copy of the layout of the monastic buildings, with which you may exercise your ingenuity and recognize my devotion, whereby I trust you do not find me slow to satisfy your wishes. Do not imagine that I have undertaken this task supposing you to stand in need of our instruction, but rather believe that out of love of God and in the friendly zeal of brotherhood I have depicted this for you alone to scrutinise. Farewell in Christ, always mindful of us, Amen.[2] 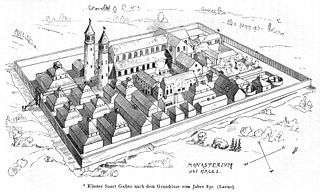 Artist's reconstruction of the buildings in the Plan by J. Rudolf Rahn, 1876.[4]

According to Horn, the Plan was a copy of an original blueprint of an ideal monastery created at two Carolingian reform synods held at Aachen in 816 and 817. The purpose of the synods was to establish Benedictine monasteries throughout the Carolingian Empire as a bulwark against encroaching Christian monastic missionaries from Britain and Ireland who were bringing Celtic lifestyle influences to the Continent (see Celtic art).

According to Earl Anderson (Cleveland State University), it is likely that Umberto Eco references the Plan in his novel The Name of the Rose:

Campus Galli is a Carolingian monastic community under construction in Meßkirch, Baden-Württemberg, Germany. The construction project includes plans to build a medieval monastery according to the early ninth-century Plan of Saint Gall using techniques from that era. The long-term financing of the project is to come from revenue generated from the site's operation as a tourist attraction. The construction site has been open for visitors since June 2013.[6]

The St. Gall Project was founded to produce a digital online presence for the Plan including models and an extensive online database on early medieval monastic culture.[7] The project is directed by Patrick Geary (UCLA) and Bernard Frischer (University of Virginia)[8] with funding from the Andrew W. Mellon Foundation. The website was released to the public in December 2007. Future resources will include intellectual and textual aspects of the Plan and monasticism; space for publication of new papers and research, lesson plans and teaching aides, blogs and chat rooms.