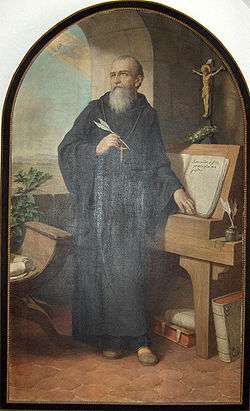 The Rule of Saint Benedict (Latin: Regula Benedicti) is a book of precepts written by Benedict of Nursia (c. 480 – 550 AD) for monks living communally under the authority of an abbot.

The spirit of St. Benedict's Rule is summed up in the motto of the Benedictine Confederation: pax ("peace") and the traditional ora et labora ("pray and work").

Compared to other precepts, the Rule provides a moderate path between individual zeal and formulaic institutionalism; because of this middle ground it has been widely popular. Benedict's concerns were the needs of monks in a community environment: namely, to establish due order, to foster an understanding of the relational nature of human beings, and to provide a spiritual father to support and strengthen the individual's ascetic effort and the spiritual growth that is required for the fulfillment of the human vocation, theosis.

The Rule of Saint Benedict has been used by Benedictines for fifteen centuries, and thus St. Benedict is sometimes regarded as the founder of Western monasticism. There is, however, no evidence to suggest that Benedict intended to found a religious order in the modern sense and it was not until the later Middle Ages that mention was made of an "Order of Saint Benedict". His Rule was written as a guide for individual, autonomous communities, and to this day all Benedictine Houses (and the Congregations in which they have grouped themselves) remain self-governing. Advantages seen in retaining this unique Benedictine emphasis on autonomy include cultivating models of tightly bonded communities and contemplative lifestyles. Perceived disadvantages comprise geographical isolation from important activities in adjacent communities. Other perceived losses include inefficiency and lack of mobility in the service of others, and insufficient appeal to potential members. These different emphases emerged within the framework of the Rule in the course of history and are to some extent present within the Benedictine Confederation and the Cistercian Orders of the Common and the Strict Observance.

An 8th-century copy of the Rule of St. Benedict

Christian monasticism first appeared in the Eastern Roman Empire a few generations before Benedict of Nursia, in the Egyptian desert. Under the great inspiration of Saint Anthony the Great (251-356), ascetic monks led by Saint Pachomius (286-346) formed the first Christian monastic communities under what became known as an Abbot, from the Aramaic abba (father).[1]

Within a generation, both solitary and communal monasticism became very popular and spread outside of Egypt, first to Palestine and the Judean Desert and thence to Syria and North Africa. Saint Basil of Caesarea codified the precepts for these eastern monasteries in his Ascetic Rule, or Ascetica, which is still used today in the Eastern Orthodox Church.

In the West in about the year 500, Benedict became so upset by the immorality of society in Rome that he gave up his studies there, at age fourteen, and chose the life of an ascetic monk in the pursuit of personal holiness, living as a hermit in a cave near the rugged region of Subiaco. In time, setting an example with his zeal, he began to attract disciples. After considerable initial struggles with his first community at Subiaco, he eventually founded the monastery of Monte Cassino in 529, where he wrote his Rule near the end of his life.[2]

In chapter 73, St Benedict commends the Rule of St Basil and alludes to further authorities. He was probably aware of the Rule written by Pachomius (or attributed to him); and his Rule also shows influence by the Rule of St Augustine of Hippo and the writings of Saint John Cassian. Benedict's greatest debt, however, may be to the anonymous document known as the Rule of the Master, which Benedict seems to have radically excised, expanded, revised and corrected in the light of his own considerable experience and insight.[3] 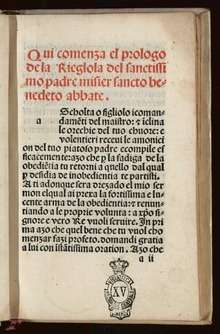 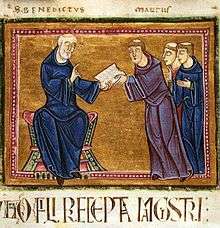 St. Benedict delivering his rule to the monks of his order, Monastery of St. Gilles, Nimes, France, 1129

The Rule opens with a hortatory preface, in which St. Benedict sets forth the main principles of the religious life, viz.: the renunciation of one's own will and arming oneself "with the strong and noble weapons of obedience" under the banner of "the true King, Christ the Lord" (Prol. 3). He proposes to establish a "school for the Lord's service" (Prol. 45) in which the way to salvation (Prol. 48) shall be taught, so that by persevering in the monastery till death his disciples may "through patience share in the passion of Christ that [they] may deserve also to share in his Kingdom" (Prol. 50, passionibus Christi per patientiam participemur, ut et regno eius mereamur esse consortes; note: Latin passionibus and patientiam have the same root, cf. Fry, RB 1980, p. 167).

Charlemagne had Benedict's rule copied and distributed to encourage monks throughout western Europe to follow it as a standard. Beyond its religious influences, the Rule of St Benedict was one of the most important written works to shape medieval Europe, embodying the ideas of a written constitution and the rule of law. It also incorporated a degree of democracy in a non-democratic society, and dignified manual labor.

Outline of the Benedictine life

Ora et Labora (Pray and Work). This 1862 painting by John Rogers Herbert depicts monks at work in the fields with an abbey (the Trappist Mount St. Bernard Abbey) in the background

St Benedict's model for the monastic life was the family, with the abbot as father and all the monks as brothers. Priesthood was not initially an important part of Benedictine monasticism – monks used the services of their local priest. Because of this, almost all the Rule is applicable to communities of women under the authority of an abbess.

St Benedict's Rule organises the monastic day into regular periods of communal and private prayer, sleep, spiritual reading, and manual labour – ut in omnibus glorificetur Deus, "that in all [things] God may be glorified" (cf. Rule ch. 57.9). In later centuries, intellectual work and teaching took the place of farming, crafts, or other forms of manual labour for many – if not most – Benedictines.

Traditionally, the daily life of the Benedictine revolved around the eight canonical hours. The monastic timetable or Horarium would begin at midnight with the service, or "office", of Matins (today also called the Office of Readings), followed by the morning office of Lauds at 3am. Before the advent of wax candles in the 14th century, this office was said in the dark or with minimal lighting; and monks were expected to memorise everything. These services could be very long, sometimes lasting till dawn, but usually consisted of a chant, three antiphons, three psalms, and three lessons, along with celebrations of any local saints' days. Afterwards the monks would retire for a few hours of sleep and then rise at 6am to wash and attend the office of Prime. They then gathered in Chapter to receive instructions for the day and to attend to any judicial business. Then came private Mass or spiritual reading or work until 9am when the office of Terce was said, and then High Mass. At noon came the office of Sext and the midday meal. After a brief period of communal recreation, the monk could retire to rest until the office of None at 3pm. This was followed by farming and housekeeping work until after twilight, the evening prayer of Vespers at 6pm, then the night prayer of Compline at 9pm, and off to blessed bed before beginning the cycle again. In modern times, this timetable is often changed to accommodate any apostolate outside the monastic enclosure (e.g. the running of a school or parish).

Many Benedictine Houses have a number of Oblates (secular) who are affiliated with them in prayer, having made a formal private promise (usually renewed annually) to follow the Rule of St Benedict in their private life as closely as their individual circumstances and prior commitments permit.

In recent years discussions have occasionally been held concerning the applicability of the principles and spirit of the Rule of St Benedict to the secular working environment.

During the more than 1500 years of their existence, the Benedictines have not been immune to periods of laxity and decline, often following periods of greater prosperity and an attendant relaxing of discipline. In such times, dynamic Benedictines have often led reform movements to return to a stricter observance of both the letter and spirit of the Rule of St Benedict, at least as they understood it. Examples include the Camaldolese, the Cistercians, the Trappists (a reform of the Cistercians), and the Sylvestrines. At the heart of reform movements, past and present, lie hermeneutical questions about what fidelity to tradition means. For example, are sixth-century objectives, like blending in with contemporary dress or providing service to visitors, better served or compromised by retaining sixth-century clothing or by insisting that service excludes formal educational enterprises?

A popular legend claims that the Rule of St Benedict contains the following passage:

If any pilgrim monk come from distant parts, if with wish as a guest to dwell in the monastery, and will be content with the customs which he finds in the place, and do not perchance by his lavishness disturb the monastery, but is simply content with what he finds: he shall be received, for as long a time as he desires.

If, indeed, he find fault with anything, or expose it, reasonably, and with the humility of charity, the Abbot shall discuss it prudently, lest perchance God had sent [him] for this very thing.

But if he have been found gossipy and contumaceous in the time of his sojourn as guest, not only ought he not to be joined to the body of the monastery, but also it shall be said to him, honestly, that he must depart. If he does not go, let two stout monks, in the name of God, explain the matter to him.[4]

The bulk of the passage, with the exception of the portions in italics, is excerpted (with chance errors) from a translation of chapter 61 of Benedict's Rule found in the book Select historical documents of the Middle Ages (1892), translated and edited by Ernest Flagg Henderson, and reprinted in 1907 in The Library of Original Sources, Vol. IV, edited by Oliver J. Thatcher.

The version above, first published in Hubbard's Little Journeys (1908), omits a part of the passage which enjoins the monastery, given good behaviour, to accept the guest as a permanent resident. The words "gossipy and contumaceous" replace the original "lavish or vicious"; and the words following "he must depart" were originally "lest, by sympathy with him, others also become contaminated."

No language corresponding to the last sentence about "two stout monks" appears in the Rule, though it is a popular myth that it does, with several reputable publications (and more than one church, and at least one Benedictine organization) repeating and propagating the error. At least one of the sources cited attributes the passage to a mythical Chapter 74; the Rule of St Benedict contains only 73 chapters.[5][6][7]

An early source for the quotation is the University of California, Berkeley faculty club, which has, for years, posted a version of the above passage on its bulletin board in Gothic script. (There, the notice was not attributed to St Benedict).[8]

According to another urban legend, the Benedictine motto is supposedly Ora est labora, which would mean "[To say] 'Pray!' equals [saying] 'Work!'" The actual motto, however, is, Ora et labora meaning "pray and work!", which refers to two major components of a monastic life: first prayer and then work to support the community and its charities.[9]