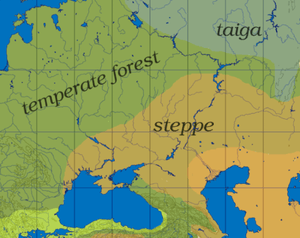 The steppe extends roughly from the Dniepr to the Ural or 30° to 55° east longitude, and from the Black Sea and the Caucasus in the south to the temperate forest and taiga in the north, or 45° to 55° north latitude.

The Pontic–Caspian steppe, or Ukrainian steppe is the vast steppeland stretching from the northern shores of the Black Sea (called Euxeinos Pontos [Εὔξεινος Πόντος] in antiquity) as far east as the Caspian Sea, from Moldova and western Ukraine across the Southern Federal District and the Volga Federal District of Russia to western Kazakhstan, forming part of the larger Eurasian steppe, adjacent to the Kazakh steppe to the east. It is a part of the Palearctic temperate grasslands, savannas, and shrublands ecoregion of the temperate grasslands, savannas, and shrublands biome.

The area corresponds to Cimmeria, Scythia, and Sarmatia of classical antiquity. Across several millennia the steppe was used by numerous tribes of nomadic horsemen, many of which went on to conquer lands in the settled regions of Europe and in western and southern Asia.

The term Ponto-Caspian region is used in biogeography for plants and animals of these steppes, and animals from the Black, Caspian, and Azov seas. Genetic research has identified this region as the most probable place where horses were first domesticated.[1]

According to the dominant Kurgan hypothesis in Indo-European studies, the Pontic–Caspian steppe was the homeland of the speakers of the Proto-Indo-European language, and these same speakers were the original domesticators of the horse.[2]

The Pontic steppe covers an area of 994,000 square kilometres (384,000 sq mi), extending from eastern Romania across southern Moldova, Ukraine, Russia and northwestern Kazakhstan to the Ural Mountains. The Pontic steppe is bounded by the East European forest-steppe to the north, a transitional zone of mixed grasslands and temperate broadleaf and mixed forests.

The Ponto-Caspian seas are the remains of the Turgai Sea, an extension of the Paratethys which extended south and east of the Urals and covering much of today's West Siberian Plain in the Mesozoic and Cenozoic.