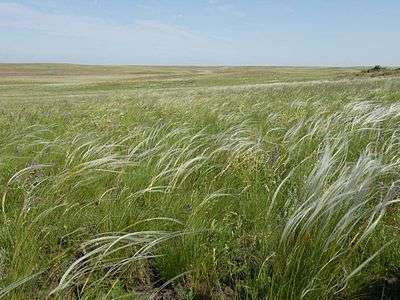 Russian steppe in the Orenburg Oblast

The Eurasian Steppe, also called the Great Steppe or the steppes, is the vast steppe ecoregion of Eurasia in the temperate grasslands, savannas, and shrublands biome. It stretches from Moldavia through Ukraine, Russia, Kazakhstan, Xinjiang and Mongolia to Manchuria, with one major exclave located mostly in Hungary, the Puszta.[1]

The steppe has connected Eastern Europe, Central Asia, China, South Asia, and the Middle East economically, politically, and culturally through overland trade routes, most notably the Silk Road during antiquity and the Middle Ages, and the Eurasian Land Bridge in the modern era. It has been home to nomadic empires and many large tribal confederations and ancient states throughout history, such as the Xiongnu, Scythia, Cimmeria, Sarmatia, Hunnic Empire, Chorasmia, Transoxiana, Sogdiana, Xianbei, Mongols, and Göktürk Khaganate. 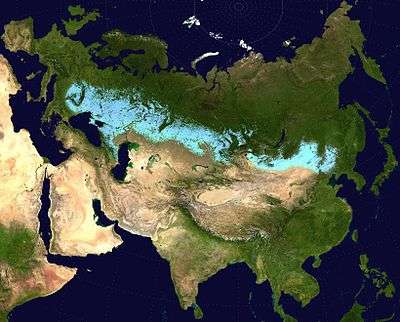 The Eurasian Steppe Belt (in  ) 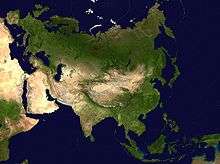 A map of Eurasia with emphasis on deserts. Note the oval Tarim Basin at the center of the map.

The Eurasian Steppe extends thousands of miles from near the mouth of the Danube River almost to the Pacific Ocean. It is bounded on the north by the forests of Russia and Siberia. There is no clear southern boundary although the land becomes increasingly dry as one moves south. The steppe narrows at two points, dividing it into three major parts.

On the east side of the former Sino-Soviet border mountains extend north almost to the forest zone with only limited grassland in Dzungaria.

China and surrounding regions. Note the oval Tarim Basin, the dryer area separating Inner and Outer Mongolia and the projection of steppe into Manchuria

There seems to be little information about steppe ecology before the coming of nomadic pastoralism. The primary animals raised were sheep and goats with fewer cattle than one might expect. Camels were used in the drier areas for transport as far west as Astrakhan. There were some yaks along the edge of Tibet. The horse was used for transportation and warfare.

The horse was first domesticated on the Pontic–Caspian or Kazakh steppe sometime before 3000 BC, but it took a long time for mounted archery to develop and the process is not fully understood. The stirrup does not seem to have been completely developed until 300 AD. (See Stirrup, Saddle, Composite bow, Domestication of the horse and related articles.)

The World Wide Fund for Nature divides the Euro-Asian Steppe's temperate grasslands, savannas, and shrublands into a number of ecoregions, distinguished by elevation, climate, rainfall, and other characteristics, and home to distinct animal and plant communities and species, and distinct habitat ecosystems.

The major centers of population and high culture in Eurasia are Europe, the Middle East, India and China. For some purposes it is useful to treat Greater Iran as a separate region. All these regions are connected by the steppe. The Silk Road started in the Guanzhong region of China and ran west along the Hexi Corridor to the Tarim Basin. From there it went southwest to Greater Iran and turned southeast to India or west to the Middle East and Europe. A minor branch went northwest along the great rivers and north of the Caspian Sea to the Black Sea. When faced with a rich caravan the steppe nomads could either rob it, or tax it, or hire themselves out as guards. Economically these three forms of taxation or parasitism amounted to the same thing. Trade was usually most vigorous when a strong empire controlled the steppe and reduced the number of petty chieftains preying on trade. The silk road first became significant and Chinese silk began reaching the Roman Empire about the time that the Emperor of Han pushed Chinese power west to the Tarim Basin.

The nomads would occasionally tolerate colonies of peasants on the steppe in the few areas where farming was possible. These were often captives who grew grain for their nomadic masters. Along the fringes there were areas that could be used for either plowland or grassland. These alternated between one and the other depending on the relative strength of the nomadic and agrarian heartlands. In the last few hundred years the Russian steppe and much of Inner Mongolia has fallen to the plow. The fact that most of the Russian steppe is not irrigated implies that it was held in grass due to the military strength of the nomads.

According to the most widely held hypothesis of the origin of the Indo-European languages, the Kurgan hypothesis, their common ancestor is thought to have originated on the Pontic-Caspian steppe. The Tocharians were an early Indo-European branch in the Tarim Basin. At the beginning of written history the entire steppe population west of Dzungaria spoke Iranian languages. From about 500 AD the Turkic languages replaced the Iranian languages first on the steppe and later in the oases north of Iran. The reasons for this are poorly understood. After 1077 a group of Turkic speakers pushed into Anatolia and founded the modern nation of Turkey. Similarly, Hungarian speakers, a branch of the Uralic language family, who previously lived in the steppe in what is now Southern Russia, settled in the Carpathian basin in year 895. Mongolic languages are in Mongolia. In Manchuria one finds Tungusic languages and some others.

If the Kurgan hypothesis of Indo-European origins is accepted, then the earliest hypothesised steppe religion would have been the mythology of the Indo-Europeans. Later, Tangriism was introduced by Turko-Mongol nomads. Nestorianism and Manichaeism spread to the Tarim Basin and into China but they never became an established majority religion. Buddhism spread from India north to the Tarim Basin and found a new home in China. By about 1400 the entire steppe west of Dzungaria had adopted Islam. By about 1600 Islam was established in the Tarim Basin while Dzungaria and Mongolia had adopted Tibetan Buddhism.

Raids between tribes were prevalent throughout the region's history. This is connected to the ease with which a defeated enemy's flocks can be driven away, which makes raiding profitable. In relation to sedentary societies, the horse gave the nomads the supreme advantage of mobility. Horsemen can raid a village and be gone with their loot before a land army can be gathered. When confronted with superior infantry, horsemen can simply ride away and regroup where there are no soldiers. Outside of Europe and parts of the Middle East, agrarian societies had difficulty raising a sufficient number of war horses and often had to buy them from their nomadic enemies. Nomads could not easily be pursued onto the steppe since the steppe could not easily support a land army. If the Chinese sent an army into Mongolia, the nomads would flee and come back when the Chinese ran out of supplies. But the steppe nomads were relatively few and their rulers had difficulty holding together enough clans and tribes to field a large army. If they conquered an agricultural area they often lacked the skills to administer it. If they tried to hold agrarian land they gradually absorbed the civilization of their subjects, lost their nomadic skills and were either absorbed by their subjects or driven out.

Along the northern fringe the nomads would collect tribute from and blend with the forest tribes (see Khanate of Sibir, Buryats). From about 1240 to 1480 Russia paid tribute to the Golden Horde. South of the Kazakh steppe the nomads blended with the sedentary population, partly because the Middle East has significant areas of steppe (taken by force in past invasions) and pastoralism. There was a sharp cultural divide between Mongolia and China and almost constant warfare from the dawn of history until 1757. The nomads collected large amounts of tribute from the Chinese and several Chinese dynasties were of steppe origin. Perhaps because of the mixture of agriculture and pastoralism in Manchuria its inhabitants knew how to deal with both nomads and settled populations and were able to conquer much of northern China when both Chinese and Mongols were weak.